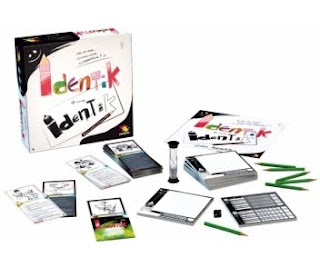 I must be on a roll. Last night, party games, and tonight, drawing games. If this is where Drake's Flames is heading, I may as well just start writing about games you can play while sitting on the toilet.

I shouldn't have a problem with a drawing game. I'm an artist for a living. But anyone who ever played Pictionary knows that drawing games have virtually nothing to do with actually knowing how to draw. Identik, for example, is all about drawing the right thing as fast as you can, even if it's butt ugly.

It's not really a complicated game. One player gets a card with a goofy picture, like a worm who built a clothesline between two apples, or a cartoon hobo with a cardboard ukulele. He has to describe the picture to all the other players, including how many hairs are sticking out of the hobo's nose or whether or not you can see both of his ears. It's important to be detailed, because the other players have to draw what this guy is describing.

Once the timer runs out (you know games like this have to come with sand timers. It's like the way Subway sandwiches always come with too much lettuce, or foreign hookers come with crabs), everyone puts down their pencils and passes their horrifyingly bad pictures to someone else to grade. Then the guy with the card reads off the ten things that have to be in the picture, and everyone gets one point if they drew the right thing.

The problem is, neither job is interesting. The reader might get all wrapped up in describing how many windows are showing at the Taj Mahal and completely fail to mention that there's a guy playing a flute while he gets a gigantic woody through a straw basket (in all fairness, that may have been a snake - I could have been confused by the fact that it only had one eye). And if the 'art director' forgets to mention that one of the maids has her hair in a bun, nobody will draw that, and then nobody gets any points for that bit.

I'm not really sure why a game where you describe art and then make everyone draw it in less than a minute has any appeal to anyone. However, I don't have to understand it to know it's true. My kids thought this game was a hoot, and asked me to keep playing even after the first game was over. I declined, because Identik was not fun from where I was sitting.

However, unlike many other lame games I play with my family, the wonder wore off pretty fast. While they did ask for one more game, they have never mentioned it again. By comparison, I get requests for Buzz It! nearly every night, and it has even fewer rules than Identik. But where the one game has you laughing about the ridiculous things you might answer for 'reasons you can't make it to work', the other game just makes you scribble furiously and then have other people make fun of your work while you cry, 'No! It's a party hat! I don't know why it's in her pants!'

Players: 3-6 (more if you score a few more pencils)

Cons:
Frantic and unfocused
Leads to prolonged arguments among teenagers (and probably adults, too)

Dogstar Games doesn't carry Identik any more than they carry Buzz It!. But I'm sure someone is. Give me a couple weeks to get my eBay account updated, and I may be selling it, too.
Posted by Matt Drake at 2:41 PM

I kinda liked Identik. It is definitely not a game to be taken seriously. Like you experienced with your kids, I think the replay might wear off with time. I gave my opinion on it here.