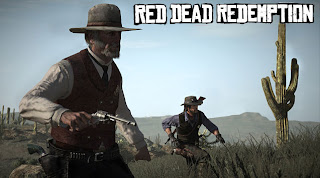 I buy two or three video games a year. It's not that I'm cheap, it's just that I'm usually really busy, and many of the games I want to play aren't all that appropriate to play when my 14-year-old daughter has friends over. But when I do buy a game, I tend to buy those go-anywhere games that game nerds affectionately call a sandbox game. Why they call them that, I don't know. Sandboxes are small places full of dirt. Sandbox games are not small, and while there may be dirt in them, they also tend to have water, and trees, and people with guns and maybe prostitutes, none of which are usually found in a sandbox, unless that sandbox is in a very bad part of town.

The television ads for Red Dead Redemption called my name. I absolutely love the Grand Theft Auto games (except for those early, top-down games - those were heinous crap), and so when the guys who make those games decide to make a Western, I'm all over it.

At first I was worried it was going to be a sequel to Red Dead Revolver, which is cool, but all you do is go through levels and kill people. But it's not, it's a humongous sandbox game, which is exactly what I was hoping it would be. I wasn't particularly interested in whether or not it had a compelling story. I wanted to ride a horse, shoot bandits from a moving train, and get into duels in the middle of the street at high noon.

Red Dead Redemption definitely lets you do all those things, but it turns out, it's also got the best story I can ever remember seeing in a video game. For that matter, it's got a better story than many movies I've seen, and rivals some of the best tales ever set in the American West. It's suspenseful, exciting, engaging and powerful. Plus you can totally kill a grizzly with a buck knife, which is another thing you don't expect to see in a sandbox.

The main character, John Marston, is a classic Western icon - the reformed outlaw who just can't escape his rough-and-tumble past. His family is held hostage by government agents who force him to hunt down his 'prior associates' - by which we mean the bad sons of bitches he used to call friends. During the course of his travels, he'll make lots of friends, travel all over the West, and shoot hundreds of people right in the face.

The stuff you can do in this game will amaze you. You can catch and break wild horses. You can hunt wolves in the deserts of Mexico. You can climb snowy mountains and then fall off of them. You'll hunt bounties, save damsels in distress, and board moving trains careening out of control. You can drown a lot, too, because John Marston can't swim, which seems like an oversight in his education, if you ask me.

In fact, there's so much to do in Red Dead Redemption that you don't ever have to finish the story if you don't want. You can hunt elk, cougars and even a spotted jaguar. You can raid outlaw hideouts and spend hours playing poker (and cheating, if you're so inclined).

But there's one thing you can't do in Red Dead Redemption, that fans of Grand Theft Auto will find surprising - bang a hooker. John's a family man, and he loves his wife enough to put himself in harms way over and over, and kill a whole hell of a lot of people to get her back. Not that there aren't women willing to render services, though. This is the Old West, and there are an awful lot of saloon girls willing to bed a bad man, even one as scarred and gnarly as John Marston.

That might give the impression that Red Dead Redemption is less 'mature' than the Grand Theft Auto games, but nothing could be further from the truth (well, honestly, there are things that are less true. Like if I said dinosaurs and humans were alive at the same time, for instance, or the moon was made of cheese). This is so much more mature than any game you've ever played.

For starters, the gore factor is a lot steeper. When you do finally manage to kill a bear with a hunting knife, you'll want to skin it, which gets blood everywhere, and leaves a mangled, skinless corpse on the ground. You don't see that in GTA. And one scene has Marston walking in on a man and woman in an active state of undress - the first time I can ever remember seeing a woman's nipple in a video game that wasn't made by the Japanese porn industry. The language is harsh, the violence is brutal, and the adult themes are off the chart.

But all those things are tenth-grade jack-off fantasies compared to the maturity of the story. This is a tale of a man seeking redemption for his sins, and nobody young enough to describe his age by his grade level is going to grasp the depth of the story. A grown man might spend hours pondering the implications of the finale; a kid is just going to want to be an outlaw.

The GTA games are labeled mature because you can shoot people out a car window and pick up hookers in the park. Those might be 'mature' activities, but they're really just uncontrolled testosterone binges. Red Dead Redemption is mature for the same reason Fight Club is mature. Sure, there's blood, but the fact is, a kid just isn't going to get it. There's more to this story than meets the eye, and it has the kind of ending that will leave you contemplating for hours.

I highly recommend that you avoid any spoilers about the end of Red Dead Redemption. I also recommend that if you're going to play this game, do it soon, because two years from now, this ending is going to be as legendary as finding out that guy from Metroid is actually a girl. Two more extremely important points, if you do buy the game:

1) Finish the stranger mission 'I Know You' before the game ends.
2) The game isn't over until the credits roll.

If you're offended by profanity, put off by gore, or just have a PETA membership, you should keep walking, because this game is really raw and extraordinarily mature. But if you're an adult with lots of time on your hands and a fondness for games that do more than just tell you where to go and who to kill, Red Dead Redemption might be the best game you'll ever buy.

Pros:
An incredible array of things to do
A staggeringly huge world
A story that redefines what video games can be

If you need a link to find one of the most popular video games on the planet, you don't deserve to have Internet access.
Posted by Matt Drake at 9:05 PM

Right on man. I take it you've finished it eh?

I have as well, and now I'm just going for that elusive 100% completion, a feat that may try my patience at times, but one that I think will also be quite rewarding.

I bought this game and played for hours just enjoying the FEEL of the west. You forgot to mention the dripping atmosphere. It just FEELS like you are out there in the dust and heat. Just starting the story! Thanks for the review!

Yep, I finished it. After the credits, though, I put it down. I just can't bring myself to go back to it. I finished all the challenges and most of the outfits before the game ended, but just couldn't bring myself to keep playing. It just felt done. I got 100% in Vice City, because I absolutely loved it, but it was light-hearted and goofy. Red Dead Redemption is dark and heavy, and when it was over, it was over. It felt like the end of Unforgiven.

Jason, you're so right about the game feeling like the Old West. The first time I was standing there after a gunfight, smoke clearing and the body of my foe cooling in the dirt, and a tumbleweed rolled lazily past, I got shivers. The atmosphere of the Old West is so well played that you don't feel like you're playing a game. You feel like you're taking a vacation that sends you back in time 100 years.

Yeah, good point Matt about stopping after the credits rolled. I did the same thing with Heavy Rain on the PS3, because that story was just as heavy as RDR's, and I felt like it was the right thing to do.

However, for RDR, I guess I come back to it purely *because* of the reasons Jason laid out: there's just so much to do and see (hell, I'll watch the sun set just because, every now and then), that I'm compelled to continue to play.