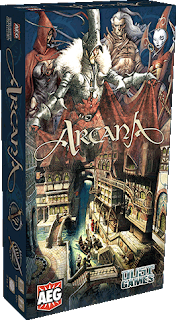 This probably doesn't happen to many other people, but earlier this evening I started writing a review of Arcana and realized something horrible - it wasn't the least bit entertaining. I mean, if I wanted to write boring rules summaries, I could just leave it to Tom Vasel. I had the whole thing written, and went back to check it, and said to myself, 'Self,' I said, 'this review is less interesting than the safety instructions of a box of Kleenex.' So I threw it out and started over.

Arcana is a deckbuilding game from Alderac, only it doesn't really feel like a deckbuilding game, it feels like a kick-ass card game that shows us how many things you can do with the idea of creating your deck while you play. And the first thing I want to get out of the way is the elephant in the room, because he just took a dumper in the corner of my office and he's about to sit on my comic books.

Yes, Dominion was the first real deckbuilding game. Yes, every game after that will have to be compared to Dominion, until enough games are made that people quit comparing them. Yes, I'm started sentences by answering questions nobody asked me. No, I don't give a rat's ass. And no, this game is not Dominion, and while it does borrow from Dominion on a very fundamental level, it is very different and should not be labeled a 'clone' of any kind.

In Arcana, each player assumes the role of a guild in the fantastic city of Cadwallon (that's 'fantastic' like fairies and unicorn farts, not 'fantastic' like awesome, though the city might be a very nice place to visit, but I wouldn't know because I've never been there, probably because it's not real). Each guild has a handful of agents at its disposal, and they'll send those agents throughout the city to exert influence, recruit more help, and lay claim to areas of the city.

As players swipe relics, control locations and persuade important people to join their guilds, those cards are added to their decks. Since different people are good at different things, you'll want to get a variety of people with a variety of skills to make it easier to get more people and places down the road.

Since the Dominion comparisons are inevitable, allow me to explain why this is not Dominion (and it's not like you have the choice of not allowing me to explain - even if you stop reading now, I will have already explained, you just won't actually see it).

The first and most important difference between Arcana and other deckbuilding games is the tense and persistent interaction with the other players. Since there are only five cards available at any time, you'll find yourself constantly trying to outdo your opponents to snatch up the cards you want. You'll scheme and bluff and possibly resort to bribery in order to get the cards, because if you don't, your opponent will get them and you'll get nothing. You don't get to just pay for cards. Everything is a competition here.

The second major difference is that you don't know what cards will be available from turn to turn. There are only ever five cards available, and they're randomized, so it's not like you can look at the available options and decide how you're planning to win the game. You have to play smart and keep your eyes open, and keep in mind what assets you're going to need down the line. Preparation is key here - if you grab up all the military men who appear, you're going to come up short when the only cards available require you to have some clergy in your pocket (quick note - you need either very large pockets or very small priests if you want to have clergy in your pocket).

A third element really sets Arcana apart from the crowd. The art in this game is amazing. Looking at the graphics on the cards make me want to visit Cadwallon, though I can't, because as I may have mentioned, it's not real. But between the theme (which is surprisingly consistent for a card game) and the amazing art, it sure feels like it could be real. I don't really play many RPGs any more, but if I did, Cadwallon would make a great setting for some half-troll druid/archer to run around and kill things. Hopefully someone can see that, and makes this wacky town into a roleplaying game.

Unfortunately, I recently heard that Alderac is sending all the Dust Games stuff to Fantasy Flight, and Arcana is one of those games. That's unfortunate because it means the likelihood of Arcana expansions is suddenly a lot lower - FFG doesn't have a good track record of supporting their smaller games. It's also unfortunate because Fantasy Flight kind of hates me, which is going to make it a lot harder to get Dust Tactics.

But even if Arcana never gets an expansion, it's still a totally kick-ass game in its own right. Do yourself a favor and just play the full rules - there's a beginner version of the rules, but they're not anywhere near as much fun as when you add in the militia and the objectives, and the ability to stash some of your cards instead of having them take up space in your deck is really nice.

Arcana doesn't invent any brand new game mechanics, but it does take some existing ideas and throw a really good spin on them. It's fun and pretty and downright affordable, with plenty of reasons to play it plenty of times. Basically, it's fantastic, in nearly every sense of the word.

Cons:
Some of the symbols can be confusing

If you're looking to score a copy of a really great deckbuilding game in a really fun setting, run over to Dogstar Games and pick up a copy. They've got a great deal on it with very reasonable shipping:

I own this game but have yet to play it for two reasons. First because the rules are not the most intuitive and second because my GF is shuffling impaired.

I realize that as a game reviewer you take quite a bit of time to read and understand the rules, but did the rules seem a bit... oblique to you?

Having watched a couple video reviews of the game which covers a bit of game play the rules make a bit more sense but I cant help myself from feeling like I need to ride a short bus to work for not comprehending the rules better.

Yes, I agree that the rules could have been more clear. A simple summary at the beginning would have been nice, something like, 'you will send your agents into the city to try to grab the personalities, locations and relics that are there.' The main problem I had with the rules was that there's never a big-picture sort of 'this is what you're doing,' and I had to piece it together on a third read-through.

Cadwallon is an RPG setting, it's done by Rackham in France. I don't know if you can get the RPG in english, but I'd like to see it.

I picked this up on your recommendation from my FLGS and got it to the table this past weekend. About the rules - something happened during translation for certain. I recommend downloading the expanded rules from BGG as they add a few pages of examples that are critical for two special cards. However, other then being hard to read the piles across the table, this game is IMHO an improvement on Dominion for the interaction. (Although one player caused enough of an argument that another player left the game - that guy should stick to Dominion.)