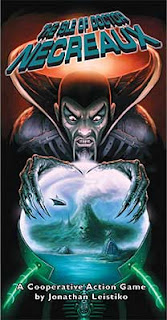 Let me tell you about this game idea. It's not my idea, but it's a good one anyway. The game is called The Isle of Dr. Necreaux, and it has huge cool potential.

First, it's a pulp game. That's cool right off the bat. A group of heroes has to infiltrate the island lair of the evil genius Dr. Necreaux, who is holding hostage a whole bunch of scientists and about to blow up a doomsday device and destroy the planet. So far, this is brilliant.

Also, it's a cooperative game, which means there is no bad guy player. All the players are trying to save the scientists and escape in the shuttle, and bad stuff happens, like monster attacks and traps and stuff. That's pretty awesome, too. We'll explore this scary island, fighting horrible beasts and dodging deathtraps on a last-chance mission to save the planet.

To make this work, the game has a big deck of cards, and each one is something the heroes encounter on the island. You draw a card, deal with it, and move on to the next. The scientists are about halfway down, and the escape shuttle is in the last part of the deck. Get that far, and you win - but be careful, because this is a dangerous island.

So far, this sounds super cool, and it should work great.

But it doesn't work. It runs right up to the finish line of the cool marathon and then falls face-first onto the tarmac and suffers a massive contusion, causing long-term brain damage and a permanent speech impediment. What should have been a great success and a ridiculously fun game winds up just being a runway meltdown. It falls victim to the worst enemy of game development - poor playtesting.

There are a lot of potential things that could happen, is the real problem, and many of them were obviously overlooked. In the right circumstance, with the right cards, you can't help but succeed. You'll waltz right through the monster attacks, dodge the traps with ease, and finish the game with enough time on the clock to stop for a smoothie and a pretzel. And if you have the wrong cards, you'll be completely ruined before you get far enough to do anything interesting at all. It would have taken a huge amount of testing to balance all the cards in the game, but it should have been done.

One thing that apparently wasn't tested (and it doesn't make sense to me that it was not) is the speed mechanic. Every turn, you'll decide at the start of the turn how fast to move, and draw that many cards. Draw too many, and you'll get demolished before you can rest. Draw too few, and you'll run out of time. This should have resulted in a tense game where you gamble every turn, pushing just far enough to survive but not far enough to fall into a spiked pit while a brain-sucking monster pulls your gray matter through your forehead.

The problem is most obvious on the trap cards. These cards usually have you roll a die and compare the result to your speed, which basically assumes that your speed is between one and six. Go over six, and you'll either automatically fail or automatically succeed at every trap. But if you want to haul ass and still have a chance to rest now and then, your speed is probably more like nine or ten, which means you get that automatic result every time. Don't even roll. Just read the card and take your damage.

But the worst problem is the cards themselves. For instance, one of the hero cards tells you to add one to any die result in an event or trap, which would be great if half of those cards didn't call for you to roll low, and on those cards, your power might as well say, 'You suck. Have a punch in the teeth.' There's also a device you can find that absorbs one point of damage, which would be barely helpful in a five-player game and makes you completely bulletproof in a solo game. There's a monster that subtracts one from its damage and then doubles it, which is devastating in a five-player game and completely toothless against a solo player. This list could go on for a while, because a huge number of these cards just don't stand up to a careful playtest. It's like they were building a rocket, and rather than do a test launch, just said, 'ah, screw it,' and then accidentally blew up a bunch of astronaut monkeys.

The idea behind The Isle of Dr. Necreaux is more than solid. It's fantastic, and made me want to play from the first moment I heard about it. The game isn't entirely a failure, exactly, but that's mostly because of some cool art and a bunch of ideas that really wanted to work together well. What it really needs is a reprint where they fix all the oversights and outright mistakes, probably by playing it at least 100 times (probably lots more). Unfortunately, I predict shamefully low sales and a near-instant decline into complete gaming obscurity, after which nobody is going to be likely to touch this game with a ten-foot pole.

And that's a shame, because even though I will never play this game again, The Isle of Dr. Necreaux gets me all excited to try some cooperative pulp action. If it had been done properly, this may have been one of my favorite cooperative games. Instead, it's like watching one of those Youtube videos where some stupid kid tries to do a handstand on a running treadmill and winds up with a fractured collarbone and a bald spot on his forehead.

Theme: 7 (great concept, horrible execution)
Gameplay: 3 (glaring gaps in the playtesting process)
Production: 5 (a bunch of cards, a little bit of cool art, and some cardboard circles)
Tested for Errors: -3 (did anyone play this at all?)

Dogstar Games doesn't carry The Isle of Dr. Necreaux, which is fine, because you should not buy it. It's great in concept, but a total mess in practice. A little bit like this:

I'm not even sure the theme is that bullet proof. Sure, some cooperative pulp action is good but there should always be a rule that allows you to double cross your buddies, at the end, and take all the glory for yourself.
Or is it just me?

Great review. I prefer the negative ones but that's because there are so many fawning positive ones out there.

I absolutly agree. It should have been a blast to play but it was not and I was worried Im the only one having a problem with the speed mechanic (which is a great idea, but not a mechanic, since its not finished).
I would even been so generous to overlook the mistakes if the game would only take 30 minutes to play. But our games clocked in at over an hour which is to much to read a bunch of cards and being annoyed by the mistakes and rule unclearities.

Glad I avoided this one. I look for solo-play games and was almost taken in.

I also completely agree with your assessment. I have played it twice and have it up for sale now. I wish you had reviewed it sooner and I would have given it a pass.

We also found that the only way to get to the relative end of the deck in time is to travel at a high speed (10-20 cards) which takes away from many of the more interesting card effects.

It just fills like a big luck-fest to me (and I like the random factor in my gaming) and the outcome is completely dependent on the order of the deck with little to no influence by player's tactics.

Thanks for confirming my experience on this one. I borrowed it from a friend who hasn't had time to play it. I can save him the time rather than suggest collecting more data with more plays.