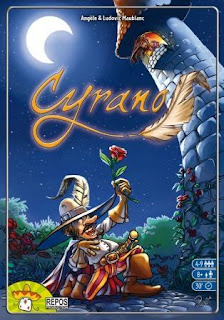 Reiner Knizia (who is, despite my constant haranguing, a brilliant man) once said that the goal of the game is to win, but it is the goal that is important, not the winning. For most games, that's kind of true. I think if you're being honest, you have to admit that it's more fun to win. But if you're playing Cyrano, that quote is ironclad truth. You'll have the most fun with this game if you're really pouring your heart into winning, but when the end comes and someone has won, you won't care who that person is. You might even win the game, and still be disappointed that it's over.

In case you haven't picked up on it yet, this is about to be one of my 'you are going to love this game' reviews. And the absolutely ironic part of this review is that, when I read the rules, I thought it was going to be more flaming than a San Francisco gay pride parade let by Rip Taylor and the cast of Cats. See, this is the only game I've ever seen that uses writing poetry as a game mechanic.

Admittedly, this is in awfully original game from a couple designers who know how to make games I want to play, so it has the pedigree to kick ass. It's just that the game itself is really odd. You get a theme and two rhymes, and you have to write a four-line poem using all three. You get points for using rhymes that nobody else used, so you can't just grab the most obvious rhymes. Like if you're trying to rhyme 'scoop', you can be pretty sure someone is going to use 'poop', especially if you play with the kind of low-brow miscreants who help me test these wacky games.

You have incentive to write good poems, too, because everyone is going to vote for their favorite. You can vote for yourself, but if nobody agrees with you, you won't get any points for it. You get points for agreeing with everyone else, so it's a good idea to pick the best poem. There's no actual reward for having the best poem, except that it's awfully gratifying to have everyone vote for yours. You don't get points for being a good poet. You get a big, swelled-up head, which is cooler than getting points.

Now, let me say right now that this is the kind of game that no real man is going to go, 'wow, that's what I always wanted to do!' We fix cars and drink hard liquor and swear at people who walk on our grass. We replace leaky plumbing and cook meat in the back yard. We don't write four-line poetry, because we leave that to starry-eyed hippie chicks and artsy college guys trying to get laid.

And yet, even if it is marginally French, Cyrano is an awful lot of fun. There's something about writing poems that appeals to even the crustiest old fart, something creative and lyrical and enlightening. It's even better if we can work in ribald jokes about sex and painful injuries. And since the only real requirement of Cyrano is that you rhyme, there's a lot of room for improvisation, and we found ourselves thoroughly enjoying the opportunity to crack wise and laugh like idiots.

For instance, when the theme of the poem was 'marriage', my poem was about getting honeymoon nookey in Cancun. When we were rhyming with '-ick', one friend had a silly poem about falling out a window and landing on your man parts. Our poems were not art, by any stretch, but one of the most enjoyable poems was a remarkably well-composed tale of a dragon who ate a valiant knight.

The game ended when three of us won at the same time. There are rules for a rhyming showdown, but there's not much point. You don't play this game to win. You play this game to write goofy poems, to laugh and enjoy the nutty inventions of your friends, and to stretch your own creative muscles. You don't have to be a good poet to play this game, which works out for me, because I'm not. Hell, none of us were, especially when we were on a timer.

I can certainly see that a lot of people would find this game absolutely ludicrous, and avoid it like a used heroin needle in a dumpster behind an AIDS clinic. There are no dice, no tense decisions, and no body count. It's about as manly as a lace thong, and yet we all enjoyed it immensely and without reservation.

Not every game has to be a battle of wits fought with meeples or plastic zombies. Some games can be great without difficult decisions and long-term strategies. Every now and then, it's fun to clear away the boards and chits and dice and just let your mind engage in something completely different, and when you're ready for it, Cyrano will be there to entertain you, and maybe persuade you to develop an unexplained interest in Liza Minelli.

Theme: 2 (complete unmanly)
Gameplay: 8 (ludicrous rhyming is actually a blast)
Production Value: 4 (replace the crappy golf pencils at your earliest opportunity)
Limp-Wrist Factor: 3 (surprised me by not being gay)

Dogstar isn't carrying Cyrano, and I would like to be surprised, but they probably didn't think it looked all that manly, either.
Posted by Matt Drake at 10:38 AM

This sucks! I didn't realize that a "ratings system" meant the end of the "pros & cons". I want those back!

I thought we were getting both too, but I'll cope if I have to.

And hey, with all that teasing you don't give us any of the poems?! Hearing about something that was funny isn't nearly as good as getting to see it for yourself. You gotta share one or two of them. :-)

Lamenting about the loss of pros and cons
is a lot like staring at bros in thongs
Misunderstood as throwing crows at gongs
When all along they remain part of the prose in....(dick joke)

I suck at this game!

Crayons, it looks to me like you have it down perfectly!

Doc, I understand your complaint, but just about everything I would have put in the Pro/Con section is in the Ratings section, anyway. It would have looked like this:

And that would just be stupid.

Matt, I'm disappointed. I just knew you were about to unload on me. :P

Well, I did sort of call you stupid. Does that count?

So, this is in the same class as "Genji"(http://www.boardgamegeek.com/boardgame/33196/genji), but much more free form, yes?