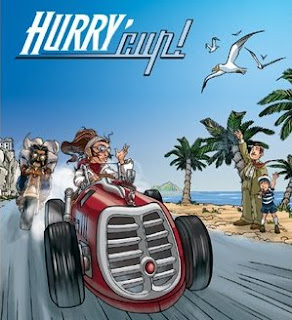 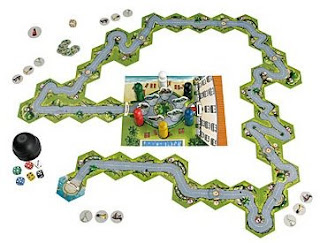 Before I jump into this review, allow me to point out the little widget called 'Followers'. It's over on the left, at the bottom, underneath all the other crap you never read because you've been here before. If you're logged in, you can click that little dingleberry and sign up to follow my reviews. Then you can add other sites to that list - I personally recommend What It All Looks Like if you like photography, or Yehuda for some off-the-beaten-track gaming info, or The Horrors of It All if you dig really old-school horror comics. And then instead of having to visit every one of those sites every day, you just log into your reading page, and it tells you when those sites have updated so you don't have to spend ten minutes surfing just to find out I still haven't written today's review. I just added that little doohickey, so let me know if it's not working right. Hopefully it will save you a little time and let you stay up on all your favorite reading. Just a service I provide, because I care about you. Not to mention that having like 600 followers would definitely make it easier to get free games.... like Hurry 'Cup.

Last week I reviewed Formula D, which is easily the best racing game I've ever played. It's so fun, I almost want to scrap this review and just write about that game instead, even though I already wrote about it once. I mention this because Hurry 'Cup is also a racing game, but it's a whole lot more family-friendly. Not that there's anything in Formula D that could be the least bit objectionable, but when a game is willing to tell you, 'your engine catches fire and your driver goes up like a Roman candle,' it's not always a good sell for the six-year-olds (I should point out that the rules don't say anything that interesting - they just say, 'you are eliminated from the race.' But we've all seen Nascar crashes, so they're not fooling anyone).

Hurry 'Cup, on the other hand, is great for the kids. It's one of those games that people are always telling you is great for young and old alike. That's hogwash, really - the only adults who like games targeted at four-year-olds are either mentally retarded or playing those games with their own kids. The rest of us don't want to play with anyone who might poop his pants and eat a booger. But it's still a game a grown man could easily enjoy with his non-gamer wife and pre-teen kids.

In Hurry 'Cup, you set up a bunch of hex tiles, more-or-less at random, and then you race on them. There are a couple cool features working here. For one thing, there's the cup from which the game gets its name. Every turn, you roll as many colored dice (known as fuel tanks) as there are players - so if there are three of you, you might roll red, blue and green. But you roll them in a little plastic cup, then slap them down on the table. Then you lift the cup, and you have to all scramble to grab the pawn that matches the fuel tank you want. If you wanted the green 4 but were too slow, you might get the red 1 and grumble an awful lot. Should have been faster, chump (I have no room to talk - my daughter beats me to the grab nearly every time. She would probably win, too, if she would look at what she's grabbing and not just try to snatch the first thing she can).

The reason you don't just grab for the highest die is that lots of these tiles have speed limits. You'll roll the accelerator die and add it to your fuel tank to see how far you go. But if you come to a speed limit area when you're moving too fast, you come to a screeching halt and your turn ends. So the guy who got the 2 and then rolled a 4 on the accelerator die will only be moving 6 spaces, and you might have a total of 10, but if you hit a speed limit 60 spot after moving twice, he'll fly past you like his wheels were coming off.

There are also a bunch of special tokens that you can trade for one-time advantages - you can hit the nitrous to jump forward one space, or be a road ace to avoid rolling the accelerator, or otherwise get away with breaking some rules. Timed well, these tokens can save your bacon. If you move your whole turn and wind up right behind a speed limit 70 spot, that might be a great time to hit the nitrous and take that spot now, so that next turn you can keep hauling ass. But if you use them wrong, they're almost completely wasted. It's all a matter of timing and just a little planning.

The art in Hurry 'Cup really improves on the theme. The cars are great. The track is gorgeous. The start area is awesome. There are even more adjectives I could use to describe the rules and the race tiles and the little plastic cup, but there are only so many ways to say, 'very attractive' before I'm going to have to repeat myself. Even better, Hurry 'Cup comes with something I've never seen in a game - postcards. There are six cards in the box, each showing one driver or team and their car. These aren't card-sized art pieces - these are actual postcards, all ready for you to write, 'wish you were here' and drop in a mailbox.

A few things keep this from being a big-time gamer's game. For one thing, it's not very deep. It's not supposed to be deep - it's a family game, not a nerd game - but if you're reading this and you don't work for a publisher, you're probably a nerd, and if you do work for a publisher, you're almost certainly a nerd, and so either way, you are probably going to get a lot more bang for your buck with Formula D.

Another thing that keeps this from rising to the game nerd top spot is the fact that the game comes with boatloads of luck. Your dopey nephew could totally beat you on his first game if he rolls better than you, or just manages to continually grab the pawn you wanted but didn't get because frankly, you're slow, and your reflexes are shot, and you should know better than to drink that much bourbon and then try to play games with kids who overdosed on Pixie Sticks and fruit cobbler. Lots of this luck is balanced out with the tokens and the pawn-grabbing thing, but you still have to roll that extra die, and if you're tied at the top of a wide-open straightaway and you roll a 1 and the other guy rolls a 6, he's going to be throwing gravel on your windshield until he disappears in a cloud of road dust, and it doesn't matter whether or not you've used your air horn to get first pick of fuel tanks.

So if you're the kind of guy who rents a hotel room in the town where you live so you can stay up with friends all night playing games, Hurry 'Cup may not be your cup of tea. It's fun, but it doesn't have the legs you'll find on Formula D. Hurry 'Cup is a cute, loveable, outgoing librarian who laughs at silly knock-knock jokes. Formula D is a red-hot lounge singer with a plunging neckline and a dry martini. Both can be enjoyable, but if you're taking the guys out for a night on the town, the giggling schoolgirl isn't going to be your first pick.

On the other hand, if you have kids or casual gamers just looking for a fun game, it might be better not to call the service and invite that smokin' dame in the skin-tight gown and the ruby lipstick. The kids will get a lot more out of a game where they try to steal dice from you and then drive comical cars around a twisty and exciting track that can be mixed up every time. The luck will keep the play balanced between the long-time gamer who can analyze every move and the grade-schooler who just wants to grab stuff and roll dice. The tokens and careful planning will give enough of an edge to the hardcore gamer to keep him around for just one more game with the nephews, who probably want to play again and will quit halfway through because they'll get distracted by a shiny stone.

Pros:
Fun, fast game with easy rules
Challenging for adults and easy enough for kids
A nice combination of reflexes and strategy

Cons:
Not much depth
Lots of luck

If you play games with casual gamers or kids, you should look into Hurry 'Cup. You can get more info here:
http://www.asmodee-us.com/games/family-games/hurry-cup.php
Posted by Matt Drake at 9:09 PM

Matt, I Googled for a review of Hurry, Cup! and find yours! I should know better and just rush to your blog whenever I'm curious about a game.
Thanks for review. I may get this and yeah the artwork is a big draw for me. Asmodee seems to have that going for a lot of their games.