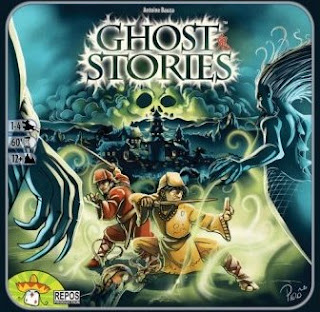 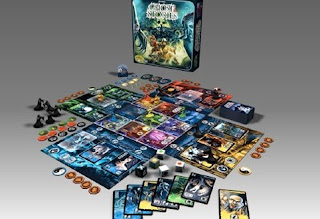 I don't tend to have a soft spot for cooperative games. Generally, I subscribe to the Conan rule that he used to determine what is best in a game - I like to crush my enemies, see them driven before me, and hear the lamentations of their women. So when I got Ghost Stories, I was pessimistic. I just couldn't see myself enjoying a game where I don't get to poke anyone's eye out.

But then I played Ghost Stories, and I've changed my mind. For one thing, you do get to crush someone, it just turns out they're ghosts. And for another, the game is just crazy fun.

The theme behind Ghost Stories is one of the driving factors that makes it so enjoyable. From the title, I was expecting a bunch of kids teaming up to defeat the supernatural because their parents won't believe them, so they just have to go take on the bad guys themselves - you know, the formula plot in about one out of five movies made for children the studios think are stupid. Instead I get a tiny Chinese village that happens to be the resting place for the funeral urn that imprisons Wu Feng, the Prince of Nine Hells. This little village is about to suffer some pretty serious trauma, as a horde of Chinese ghosts come hunting for the urn to release their leader and destroy all life on the planet. The only thing between the ghosts and the annihilation of the human race is a band of four Taoist monks, and if you ever watch kung fu movies, you know those Taoist monks do a lot more than wear sexually ambiguous robes and swing incense. These monks are bad-ass kung fu masters, capable of battling ghosts on their own terms with the magic, speed and old-fashioned know-how you only see in movies where people can run across water if they move fast enough.

As is the case in most cooperative games, every turn a player has to do something that would cause his side to lose. In this case, you draw a new ghost card every turn and place him in one of the areas surrounding the little village. Many ghosts have special powers, like the ability to haunt a building in the village or curse the Taoists or maybe just bring new ghosts with him. And the Taoists have to run out and try to exorcise those ghosts using the traditional old-school ghost cures like sticky rice and incense. The players battle ghosts using a couple of dice with different colored spots, and they have to roll as many spots as the ghosts' power - a ghost with two yellow would require two yellow spots, for instance, but a couple yellow Tao tokens could be used if the player can't get the roll he needs.

The village is more than willing to help, and it's a good thing, because those Taoists are going to run out of magic beans in a hurry on their own. One villager might be willing to give them a few Tao tokens, another might offer a Buddha statue that can capture a ghost without a fight, and yet another might just let them drink some tea and take a load off (a nice place to unwind after a hard day getting punched in the pancreas by hopping vampires). Without the help of the villagers, the Taoists don't stand a chance - but without the Taoists, the village is going to become ground zero in the world's worst catastrophic supernatural event. So it's only fair the lazy bastards chip in now and then.

As the game progresses, the ghosts start to take over. There are only four monks running around, and you can have up to twelve ghosts at any time. You can call on the sorcerer to kill them for you, but his spells are powered by life force (specifically your life force), so that's always a desperation move. Sooner or later, a monk is probably going to buy the farm, and then everyone else has to decide - risk a curse to bring him back, or keep fighting, but down a man? Those ghosts keep coming until Wu Feng finally makes an appearance, and when that big bad sumbitch finally shows his face, you want everyone at their best. Of course, the odds are, when that horrible bastard makes an appearance, everyone is tired, beat up, and low on resources. But if you can bust Wu Feng like a giant marshmallow man, you win the game, so everyone pools resources and gives it the ol' college try in one last, desperate bid for the continuation of humanity.

The thing about Ghost Stories is that it's possible to win, but it's not easy. In fact, you're likely to lose about half your games. This desperation makes it exciting and tense, and when you finally do manage to send Wu Feng howling back to Hell, you'll feel like celebrating, even if you do have two kung-fu masters taking a dirt nap and the other two bleeding from every major orifice. You have to play smart to win, and even then you can still get hosed by a bad run of cards or a couple crappy die rolls, so it's always thrilling. It's about the best hour you'll spend not hurting your friends.

With increasing levels of difficulty to keep it challenging, a neat expansion with more themed ghosts and a new building, magnificent art and some of the best cooperative interaction I've ever seen in a board game, Ghost Stories has shot to one of the top spots in my house. I may not always have an audience for Last Night on Earth, but I know I'll be able to get a crowd for Ghost Stories. And now that I can hear the lamentations of the ghosts, I can't wait to play again.

Pros:
Starts fast and never slows down
Incredibly interactive
You don't have to attack your friends
An absolutely silly amount of fun

great review as always, makes me want this game.

Happy New Year to you and yours, we are sitting here having some fresh choc. chip cookies, we party hard for new years I tell you!

I like them both. LNOE is a great game, and so is Ghost Stories. They just have completely different audiences and game styles. One is like playing a movie; the other is an exercise in cooperation.

Have you played Arkham Horror? If so, how does this compare?

I have not played Arkham Horror, so I couldn't say, but I like the theme a lot better in this one. Also, from what I hear, Arkham Horror takes a little while. You can finish Ghost Stories in about an hour.

Great review. I just finished reading the rules and plan to play a solo game today.

Arkham is a different puppy. Awesome game. Awesome theme. Hard as hell, but takes at least 2.5 hours or more to play.

Fantastic game... and I would not have bought it without your review ! It is a TOUGH game to win and the rules are confusing , but once you get the hang of it, I think it is the BEST game I have ever played. Thanks !