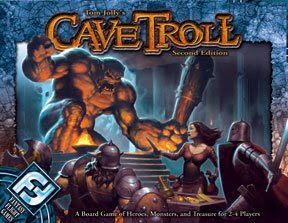 Writing reviews is hard work. It's two in the morning, I've had nearly no sleep for 24 hours, and I can't think of a damned thing to say about Cave Troll that will make you want to go out and buy it. That's a real shame, too, because it's a fun game. I suppose I could write the kind of review you can read anywhere, and just tell you about the game in excruciating detail until you fall asleep at your desk and wake up drooling on your keyboard, but that's not really my bag. The way I see it, a job worth doing is worth doing well (at least, that's what my old man used to tell me. He also used to say, 'I love work. I could watch it all day.' Not that this last saying has anything to do with Cave Troll, game reviews or losing sleep. I just wanted to write some extra crap to put off trying to come up with brilliant witticisms another couple lines). So I'll do my best here, and if you hate me later, you can join the swelling ranks of the official Matt Drake is an Asswipe Club. They have jackets.

So Cave Troll is a re-release done by Fantasy Flight a few years ago. Or maybe it was recent. I don't know. It has all these little plastic dudes, which is about standard for them, though it's surprisingly affordable given the sheer weight of plastic in the box (I know it's affordable because I had to buy it. FFG doesn't send me review stuff since I said the Mutant Chronicles CMG had a penis). It also has lots of cards with different backs and a swanky cool dungeon board.

The goal of Cave Troll is to get paid. That's not the world's most original goal, but what's interesting is how it's done. Every turn, you can do four different things. You could play a card to bring out one of your guys. You could move a guy one room. You could use an artifact (if you've found one). Or you can have a complete lapse of memory and not remember what the fourth thing is, and be too lazy to look even though the game is sitting three feet away from me. Actually, that last one is not an option in the game, though it is one I use from time to time in real life.

Come to think of it, the way the cash-grabbing is done is not all that original, either. This is a basic area control game, where you move your dudes from spot to spot and try to score gold. You don't fight with the other people in the dungeon - not even the monsters. If the cave troll steps into your room, he kills you. If the orc comes in, he kills you. If the knight walks in and hits the orc, the orc dies. There's no die rolling, just instant body count. Which is good if, like me, you like to see some bodies stack up now and then but just can't be bothered with the details.

The thing that makes Cave Troll interesting is the different abilities of your figures. The dwarf can double the score for one room, and the barbarian is a big bruiser who counts double for area control. The knight blocks people from moving into the room. You even control the monsters on your team. The cave troll can walk into a crowded room and break wind bad enough to clear it out, and the orc can kill people, and the wraith can make people leave by doing what all really old people do - telling you about their gout and kidney stones while you're trying to eat dinner.

Now, the thing is, this is actually pretty abstract. If you're looking for a story, it ain't here. The emphasis is on the mechanics, not the theme, but the theme is still pretty fun. You maneuver, you shift, and you plan, and then the wraith shoves someone out of the room right before the troll comes in and smashes them to grape jelly, so it's not like a boring math game despite being a game about placing assets to maximize returns. Come to think of it, when I say it like that, it does sound a little boring. But it's not boring, it's fun, I swear.

There's even an alternate game where all the figures have different powers. Like in the first game, the troll can't move, but in the alternate, he's just really slow. It takes a while for his short bus to get from stop to stop, I guess. If you get tired of getting your ass beat at the game one way, you can mix it up and lose a completely different way. It's awesome.

Despite being easy on the wallet, the pieces in Cave Troll are really nice. You might have a little trouble figuring out which one is the orc and which is the barbarian, but since the orc is on a square base and the barbarian is on a round base, it's not that hard to tell the difference, and you're probably just stupid. All the parts of the game are neat and fun and pretty, and the art is totally kick-ass. Like, totally.

So now I'm at the end of the review, and I'm looking over it, and I'm thinking to myself, 'next time, I need to start writing before HBO starts running shows about hookers.' Because for one thing, when the shows about real-life hookers come on, I don't want to be writing, I want to be watching TV. And see, they don't come on until really late, so I should totally be done writing before then.

Maybe next time I'll start earlier, and then I can enjoy whore-based TV shows guilt-free.

Cons:
Some of the figures can be difficult to tell apart
I could think of something more hilarious if I was less sleepy

Cave Troll is a good game. You can get it pretty cheap from Wargamers HQ:
http://www.wargamersheadquarters.com/product/cave-troll.html
Posted by Matt Drake at 11:53 PM

What version do you prefer, of the 2 games?

How would you compare this to Drakon 3rd Ed.?

Your golden in my book, what Geek doesn't understand the Hooker excuse.

Wait! Where can I get a jacket? I never got the invite!!!

Good review, I prefer Drakon to Cave Troll, but that's just me, brother. Keep the candle burning for those non-mom's-basement-dwellers!