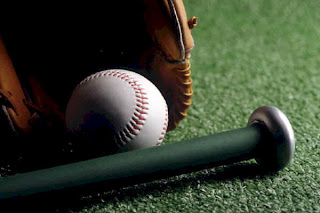 OK, no, baseball is not a board game, unless it's one of those weird sports games where you pretend to play baseball, but without the sweating. But last night I went to watch the Yankees play the Rangers at the Ball Park in Arlington, and saw lots of similarities between the games we play and the crazy, sweaty, hard work that goes into the Great American Pastime.

I'm not going to explain the ins-and-outs of baseball. That's silly. It's like reviewing checkers. Everyone knows the rules - you hit the ball, you take a base, the other guys try to stop you. Unless you were raised by wolves, you probably know most of the stuff that happens in a standard game of baseball.

But despite knowing how the game works, most people - especially most gamers (by which I mean people who spend more time figuring out how to get high ground on a plastic map than they ever spent trying to decide if they wanted to sacrifice to right field) - don't really pay attention to how much mental effort goes into playing baseball. We might read Sun Tzu to learn all about the art of war, but we don't bother to understand why you would switch out a pitcher in the eighth inning after only two pitches.

And I think that's a shame. There's a tendency to look down our noses at sports fans (and having been to a big game last night, I can see why), but we have a lot more in common than we might think. We wear shirts with dice on them that say, 'that's how I roll'; they wear hats the size of microwave ovens that declare their allegiance. We carry dice bags; they take off their shirts and paint their flabby stomachs in team colors (come to think of it, there may be a good reason we mock them).

Baseball depends on two factors. First, you have to have good players. There's a reason Alex Rodriguez and Derek Jeter make a boatload of money - they're good at what they do. They make catches that normal players miss. They can spin and hurl a ball to first before an average man could even pick it up off the ground. And they can hit a fastball so hard it leaves the park, which I dare any reader to even try. Hell, if I was staring down a major league pitcher who could throw a leather ball of pain at 90 miles an hour, and who could totally hit me if he wanted, I don't think I could hold the bat up without peeing myself.

But the real strength in baseball is not the players, it's the coaches and the manager. It doesn't matter how good a pitcher you've got on the mound, after he pitches 100 times, his arm's going to be tired. And if he's facing a really good left-handed batter and trying to protect a one-run lead with two men on base and two outs, it might be a good idea to send him to the bench and bring in a fresh lefty to choke up on that designated hitter.

It makes me wonder if Tommy LaSorda might have been a gamer. He could make decisions and pull smart moves and call for steals that left the other team tied up in knots. That kind of strategy and tactical maneuvering is the same kind of brilliance needed to win Heroscape tournaments. It's all well and good to be able to dive after a line drive and chuck it to second for the double play, but if the gamer nerd in charge of the team can't time a replacement or sign for a walk, you could still lose to a team with worse players.

And playing the game isn't the only time these guys have to be good. We like to talk about army building like it was a newly-discovered art form, but professional sports managers have been doing it for decades. A weaker second baseman with a good bat can be offset by a good shortstop and a covering center field, and these managers build a starting team the same way you might assemble a warband. Late-game replacements take more thought than we ever put into building our side decks, and they're often far more important. Watching Mariano Rivera come in at the top of the ninth to protect a small lead, and then going three up and three down, lets you understand why he's the big closer for the Yankees, and why they always save him for last.

But just as we can have poor sports in games - guys who fudge die rolls, or get mad when you surprise them with a flanking maneuver, or who pout when you kill their big guns - professional sports is rife with sore losers. One thing I noticed last night is that the fans at Rangers games have an incredibly high RRR - relative retard ratio. Sweet Mexican jumping beans, there are some dumb sons of bitches who go to baseball games. Here's an example - the second at-bat of the game, Derek Jeter hits a home run. The next time he comes to the plate, the stupid bastard three rows back yells, 'Jeter! Go home!' To which I replied, 'He already did once!' And don't get me started on the wave, the kissing contest, the signs, or the screaming cheers. GenCon is a convocation of atomic scientists compared to the stands in a ball game.

To make matters worse, sports fans must be some of the world's most easily amused humans beings. The ballpark feels compelled to distract us between innings, with some of the most insipid garbage ever passed off as entertainment. They pass out these little tickets with different colors for the sixth-inning dot race, and then three people wearing suits that make them look like Kirstie-Alley-sized M&Ms run around the field and then fall down. And people cheered for them, probably because they had spent six innings drinking seven-dollar beers, and maybe most of their childhoods eating lead paint chips.

The whole thing makes me think, though. Comparing gamers to sports fans, you've got one group who sits around coming up with fantasy teams, obsesses about stats, and collects obscure and rare paraphernalia to round out closets full of irrelevant crap. And then there are sports fans. Both of our obsessions require us to know tomes of minutia that could end up deciding the game. Both make us learn strategy, tactics, and timing. Both tend to involve a great deal of trash-talking. We're not so different, when it comes down to it, and I think if we could see the similarities instead of the disparities, we could both learn something. Maybe it would make a better world if sports fans and gamers could get along, and see that neither one is necessarily better than the other.

But at least we don't watch board games on television.

Pros:
Lots of strategy
Team construction is crucial
Timing is everything

I'm not about to give up my Saturday afternoon game club to watch baseball games, but I can sure see the draw to a professional baseball game. If you attend a game, you could even get to see this guy:
http://www.mopupduty.com/leaffan.jpg
Posted by Matt Drake at 9:01 AM

I've been a baseball fan since I was very little. And one of the things I've always liked about baseball games is the more casual atmosphere you have in the stands. Now, different parks attract different crowds, and they're all drawing from different groups of people.

But in the same way that Heroscape, Fluxx, and Settlers of Catan are vastly different from each other, so are the various sports.

You can draw illusions to how a fast passed game is more like hockey while a war of attrition is closer to football. A game where the majority of it is setting your opponent up to take a fall is easily imagined as soccer. And a game with niggling little rules that frustrates you, yet keeps you playing for some unfathomable reason is golf.

I don't consider myself a big sports fan or much of a gamer, but what I know I am a fan of is competition. Watching or participating in contests of skill and ability are always a great time for me.

Sorry, that should have been "fast paced game".

%&$* sports. Always interrupting my shows. And you can take the Olympics and shove it up your @$$.

Oh, OK, thanks for your helpful comments.

(Who let that guy in here?)

I am pretty sure you CAN'T shove the Olympics up your ass...even if you wanted to...even if you DIDN'T want to but HE wanted to do it to you. You just can't do it...nope...can't even begin to try.

Curious. But these types "Kum and Go" ;)