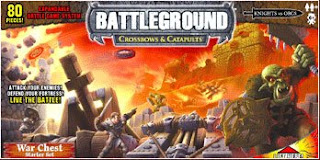 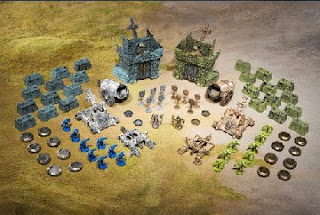 When I was about 13, my brothers and I got a copy of the old Crossbows & Catapults game. We played it until the rubber bands broke, and then we replaced the rubber bands and played it until the catapults broke. It was a blast, and we could spend hours sitting on the floor shooting plastic discs at each other. Sometimes we even tried to hit the targets we were supposed to shoot.

Fast forward a couple decades or so, and some enterprising Australians are recreating my youth. They've changed the title a little, but this is still the awesome disc-hurling madness I remember from when the closest I could get to seeing a naked girl was to read a magazine.

I'll be completely honest here - I don't remember all the weapons and stuff that were in the original game. I know there was a catapult, and I remember a crossbow, but those would probably be hard to forget, given the name of the game. So instead of comparing the two, I'm just going to tell you all about why you should buy your kids this game.

First off, each side (orcs and knights) gets the same three weapons. The catapult is great for elevated shots to knock out stuff hiding behind walls. The crossbow is accurate, but not too powerful, and the cannon is kind of a happy middle ground between the other two. Each side also has a castle with a catapult in it, and if you can hit the door of your opponent's castle, plastic flames pop up and kill whoever was manning the weapon.

You each set up a little army of plastic guys with very few rules. Mostly those rules are that you can't hide everyone behind the castle, and you have to have a plastic guy near a weapon if you want to use it to shoot. You build flimsy plastic walls from little bricks, which provide the illusion of safety but really just crumble the first time they're hit, dropping debris all over the poor bastards hiding behind them or sending bricks bouncing against the castle gate to kill the dude on the ramparts. But you build the walls anyway, because if you're getting a box full of toys, you know you're going to have to use all of them, even if it's a handicap.

Then you take turns shooting at each other. This can actually be kind of tricky - pull back the catapult arm too far, and you'll send a disc into your opponent's eye. Go too easy, and you won't hit anything at all. Personally, I recommend shooting the discs at each other as often as possible, unless you need to finish quick and clean up so that your wife can vacuum.

Because that's just about the biggest problem with this game - you need lots of space, and it's better if it's not carpeted. When we break this out at my house, it has to be when Mom is out grocery shopping and the kids and I are supposed to be doing the dishes. Of course, then we get all distracted shooting each other with chunky plastic bullets, forget to mow down the enemy armies, prolong the game too long, never get to the dishes, and end up sitting on the floor looking up like guilty two-year-olds when Mom opens the door and says, 'well, looks like you guys were busy.' Of course the kids always blame me.

If you have a big living room and hardwood floors, and you can talk Mom into sitting on the floor and manning the cannon, you should be in good shape. We end up moving the furniture, after which you can see what a piss-poor job I did sweeping up the dog hair, and then trying to push the floating hairballs back under the couch so that we don't have to stop playing to clean. And my wife is not about to sit on the floor to play a goofy shooting game - she's got a bad back, and besides, she needs to finish cooking dinner. I really ought to stop and set the table, but I just want to shoot one more plastic disc at my son before I run away so he can't shoot me back.

In fact, if I could offer one huge reason to buy this game for your kids, it would be irresponsibility. When you break this out, put together the weapons, and spend four hours firing hard chunks of plastic at your kids' faces, you'll go back in time to when you thought the coolest thing ever was sticking a playing card in your bicycle spokes so it sounded like a motorcycle. You'll finish up a game and wish you could go spin around the driveway in your Big Wheel. You won't think about the laundry, or the bills, or the dripping faucet. Screw the mortgage - for the next thirty minutes, you're a ten-year-old kid without a care in the world.

At least until your wife comes home and reminds you that you still have to finish fixing the fence.

Pros:
Great fun for the whole family (unless Mom won't play)
Trip down memory lane
The weapons are surprisingly accurate
In fact, all the pieces are really cool
Irresponsibility rules

Cons:
Not much depth... but it's about shooting, not thinking
Not as colorful as the old version

I love breaking out this game every now and then and just forgetting everything but wiping my nose on my sleeve. If you could use an hour of child-like fun, go here and score your own:
http://www.amazon.com/Battleground%253a-Crossbows-Catapults-Chest-Starter/dp/B000NPSVEO
Posted by Matt Drake at 10:50 PM

Adding it to my wish list, the wife will kill me since we don't have kids so I will buy it for my nephew, they have wooden floors so that will be super cool to play on!

Hi. You are doing a great job with the reviews. Hope my bro and i are going to play eventualy.