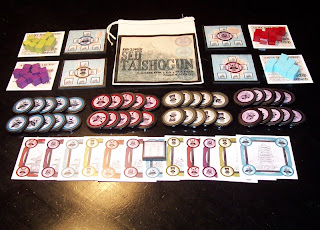 I swear it's not Japanese Conquest week. I don't have samurai on the brain or a sudden desire to take up ninjitsu (that particular desire has been in place since I was seven years old. I just haven't got around to pursuing it yet, outside some limited training for a Ninja Burger delivery job that I didn't get). It just worked out that I ended up playing a lot of these 'Battle to be Shogun' games in the last couple weeks. Maybe I will go buy a ninja sword, but I doubt it will have anything to do with games. I just want a really cool way to cut bread.

This latest Japanese takeover game is called Seii Taishogun, and it comes from my favorite upstart miniature game company, Small Box Games. In typical Small Box fashion, it resembles pretty much nothing you've seen before, and to really make things interesting, now it comes in a bag. I've been wondering if John Clowdus, the mastermind behind Small Box Games, is going to change the name to Small Bag Games, but if he does, I hope he makes bigger bags next time, because I can barely cram the whole game back into the bag. That's good and bad - there's a lot of game in this bag, but it's a pain in the ass to put away.

I do understand why the bag replaced the box, though. For one thing, the bag is an actual game component, not just a storage container. You blind-draw samurai poker chips out of it while you play. Plus it's got to be easier to put stuff in a bag than pack all those little boxes John used for his first four games. If you're one guy making games in your garage, and you assemble every game yourself, anything that keeps you from spending every night folding boxes probably also helps get you laid now and then. Being available makes it a lot easier to make time with the wife (or so I've heard. I may have to try that).

The chips are the main focus of the game, but there are also four different islands mounted on wooden cards (yeah, I know that sounds weird, but that's what they are). There's also a bag full of wooden cubes in four colors, to let each player show what areas he's claiming. Finally you get a stack of Sengoku cards to tell you which location is the battleground.

The idea of the game is that you try to take locations on the four islands by building the best 'hand' of samurai tokens. You draw a bunch of tokens from the bag, and then when fights break out, you assemble an army of tokens by placing them face down. Then you all flip the armies at once, and the best army (determined by the makeup of the army) wins the battle and gets to claim a location in Japan.

It can take a little bit to warm up to this chip-betting thing, but once you get it, it's really clever. It's like poker, but with wooden chips instead of cards. In fact, we took to calling it Samurai Poker because we were continually competing for the best hands of samurai. You can bluff by putting down total garbage and hoping the other guy folds, you can play hard with a winning hand, and you can back out if you're not feeling lucky. It would really make the game if you could get comped for a room and then tip a floozy in a cocktail dress to bring you martinis all night, but you can only fit so much into a cloth bag. Besides, there may be some legal issues trying to bring the bleach-blond waitress across state lines in a canvas bag.

Winning battles, as I said before, lets you claim provinces, and claiming provinces gets you points when the game ends. So beyond just trying to bluff and deal and fold your way to a winning bid for power, you also have to weigh how much each spot is worth - the castle might be a juicy target, but if you can grab both pagodas and a temple after everyone else plays all their power, you can rock their faces off (for the record, I mostly end up with a single castle. Other people get all the pagodas and temples. Because I suck at this game, almost as much as I suck at poker).

The strategy in Seii Taishogun takes a little while to figure out. About the time you start to see how the game works, you start to develop some idea of what you need to do to win. Which means that my dumb ass completely got thrashed in the first game I played because everyone else figured it out faster than I did. But practice makes perfect, and so like most games that are any good, it's better to play with people who have played a few times before. Not that it will do me any good - I'm going to have to find some Special Olympics kids to play if I want to win this one.

If you like the strategy of poker and the excitement of samurai battles, you should go to Vegas and visit one of those theme hotels where the waitresses dress like geishas and only serve rice wine. But if you can't afford Vegas (and with the price of gas, who can?), you can also play Seii Taishogun, whose unofficial new name will from here on be Samurai Poker.

Cons:
It's really hard to tell the purple from the red
The bag's too small

I've got bad news - this puppy is already sold out. If you're not on the Small Box Games bandwagon yet, you better pay attention. Every game goes faster than the one before. If you don't own a copy of Seii Taishogun, here's the boat you're missing:
http://www.gearthblog.com/images/images906/maemiship.jpg
Posted by Matt Drake at 10:03 PM

Maybe Small Box will get more printed next time? Of course you may make more money that way.

I won't actually make more money that way, because I don't actually have a stake in Small Box Games. I'm a reviewer. All I get are games. They get the money.

But yes, it would be great if they could make more copies. I think John could probably sell 100 copies pretty easily, given his quickly growing popularity.

"In fact, we took to calling it Samurai Poker"

2nd edition is out and uses cards now. May still be available for order.