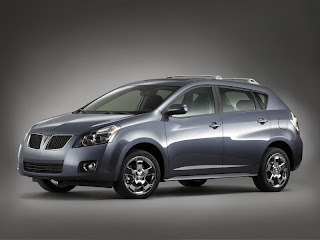 When planning a cross-country road trip, the most important first factor is to choose a good vehicle. A roomy passenger van might be the most comfortable choice, but it may not supply any decent kind of gas mileage (important when you're driving on continual alert for the cheapest gas prices, so that when you wait five minutes and find a five cent difference, you pump your hand in the air and whoop like a football fan). You might want a little hybrid, but those can be cramped, and after a day spent folded up like a newspaper coupon insert, you probably won't give a flying rat's ass about conserving fuel.

Once you pick your vehicle and get on the road, you can start building your road memories. I don't know what it is about road trips, but the most memorable thing to me is almost always the gas stations toilets. Hollywood might make long car trips seem like great adventures on the American highways, but in reality they're mostly just 12 hours of highway punctuated by painfully full bladders and not enough cigarette breaks. So in the end, the thing that ends up sticking with me is the condition of the various gas stations you find between two cities a thousand miles apart.

For instance, when we stopped for lunch, we ate at Arby's. This is easily memorable to me, not because of the horrible sandwich or cold fries I had, but because when I went into the public restroom to relieve my overburdened bladder, someone had been thinking Arby's all over the crapper. It looked like chopped meat sprayed out of a garden hose.

But then the toilet at the gas station in the back side of nowhere looked like it might have been in a five-star restaurant. The only thing that was missing was an ethnic minority doling out cologne spritzes. There wasn't even a condom machine (because all the prophylactics and lube was sold out front with the cigarettes).

Our particular trip exposed us to another beautiful landmark of civilization - the Indian casino. As you drive through Oklahoma, you'll be indundated with gigantic flashing billboards all advertising the loosest slots in the state. The most amusing thing about Indian casinos (which should probably be called Native American casinos, but nobody actually says that. Political correctness tends to fade in the face of reality) is that they don't serve alcohol. I don't much enjoy casino gambling in the first place; if I had to do it sober, I would hate it even more. I would probably win more money, but I would have less fun.

When it comes down to it, though, my favorite part of the Dallas to Indianapolis road trip is in Illinois, just hours away from the destination. It's a chain of convenience stores/gas stations titled with what may be the most unfortunate name in retail history - the Kum N Go. I am not making this up. The name conjures images of anonymous gay trysts in roadside rest areas, which does very little to persuade me to visit. I've never actually been inside a Kum N Go, but I love to laugh every time we pass one like a high-school freshman who still laughs at his own farts.

I'll tell you this, though - if I ever do decide to visit a Kum N Go, I'll bring a Pontiac Vibe. And if I do, I hope to get one of their staff to deliver the company mantra - We Go All Out.
http://www.kumandgo.com/
Posted by Matt Drake at 2:44 PM

We only had 5 hours drive, not nearly as bad as you. We had a giant Yukon and spent way to much on gas, but man was I comfortable!

On condition barely you try live casino, you will appreciate what videopoker online is.