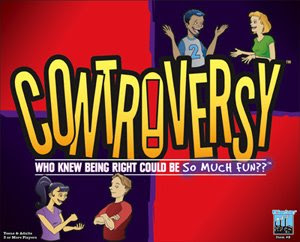 Today is Independence Day, the day we celebrate our declaration of freedom from the rule of the imperialist British Empire by having parades, blowing stuff to pieces, and cooking outside. And to commemorate the holiday, it's only appropriate that I review a game about the Revolutionary War.

I think Wooden Ships & Iron Men would be perfect. I used to play this all the time with my old man, pitting our sailing ships against each other just like my favorite hero of the Revolution, John Paul Jones. When his ship was sinking underneath him after a particularly vicious battle at sea, and the British commander of the enemy vessel told him to surrender, he said, 'screw you, bitch! I'm just getting started!' (that's kind of a paraphrase). Then he boarded the other ship and claimed it for himself. Yes, that game is perfect for Independence Day.

Too bad I don't have it. So instead I'll review Controversy, a party game where you get into fights about trivial arguments until someone starts crying. And no, it doesn't have anything to do with the Fourth of July. So much for celebrating.

Controversy is a party game from the NY Game Factory. This small game factory has somehow managed to make party games that don't suck. Considering the overwhelming majority of party games make me want to punch a kitten, that's quite an accomplishment.

The goal of Controversy is two-fold. First, you have to guess how a particular person feels about a particular topic. And second, you have to persuade that person to agree with you. Neither goal is easy, even if you think you know your friends.

First off, the topics are not stuff you talk about every day. For instance, most married couples do not sit around debating stuff like 'abstract art is not art' or 'women are more likely to become gay after a bad relationship'. There is the occasional 'Al Gore versus George Dubya' card, but mostly, these questions are not things you probably consider on anything like a routine basis (except for that lesbian thing - I wonder about that all the time).

Second, even if you can guess another person's position with any kind of accuracy, you still have to persuade that person to agree with you. Good luck - you could be as eloquent as Benjamin Franklin, but it's still hard to make an Elvis fan agree than the Beatles were more important to modern music. And you'll never persuade me that teen actresses from Disney Channel aren't likely to need rehab, parenting lessons, or penicillin shots (that's not actually one of the cards, but I really don't like those Disney Channel girls, so I'm slipping in a cheap shot).

If one player is a particularly good debater (as opposed to a master debater, in which case you probably don't want him spending too much time on your leather furniture, especially if he's still thinking about that lesbian question), you can try to shut him down by playing the special cards you have. You can make him put a sock in it and skip his turn to argue, or you can steal the chance to have the last word. Sometimes that makes all the difference. Sometimes nothing will help - if a person is dead-set on believing that dinosaurs and humans actually inhabited the planet at the same time, something as obvious as common sense and overwhelming evidence is not going to help.

The problem (and maybe the best thing about the game) is that you don't always end up keeping score. I've played this with lots of different people (all of them adults), and more than once, the game has just evolved into pulling out cards, reading them, and debating loudly. Generally, this has a higher chance of happening if you've been drinking lots of beer, and then the debates also tend to be louder, though they have a much lower chance of being even remotely coherent.

If you read many of my reviews, you'll notice that I have a low opinion of many party games. That's because most party games are idiotic pap designed by sleep-deprived college students kept awake on Red Bull and cocaine, catering to people who can't stomach rules more than two paragraphs long. When we can have party games as good as Controversy, people who make crappy party games should be taken outside and beaten with a rubber chicken until they repent and go back to their jobs as horrible postal employees.

Cons:
Rules tend to be forgotten and you may wind up just reading the cards out loud and then arguing a lot

I don't like many party games, but I love Controversy. You can get your copy here:
(really long link)
Posted by Matt Drake at 12:29 AM