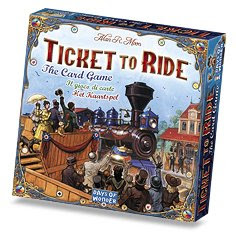 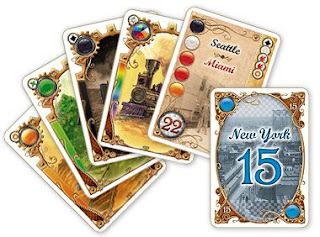 This could be the shortest review ever. I could just say, 'it's just like the board game, but with cards.' Somehow, though, I tend to think that might not be all that satisfying, and I'm pretty sure the guys at Days of Wonder might be a little irritated at having sent me a review copy.

So instead, I'll actually tell you about the game, and you, loyal readers (both of you) can make up your own minds.

The Ticket to Ride card game does, in fact, bear a striking resemblance to the board game, but at its core, this is a card game, not a card version of a board game. You still have colored trains, and locomotives, and tickets - otherwise it would be something else, and not Ticket to Ride. I'm not sure even Days of Wonder could sell Something Else: The Card Game. But if they did, it would probably be pretty cool.

Anyway, you get a number of tickets with train routes - Denver to El Paso, New York to Denver, Denver to Miami, Chicago to Denver, and lots more, some of which don't even have Denver in there. And the routes have these colored spots, which indicate the colors of train cars you have to put in your 'on the track' stack to score the route. If you've played the original Ticket to Ride, this part should basically make sense.

The differences, though, are greater than the similarities. For one thing, there's no board, so you're not claiming tracks. For another, you put trains into the railyard, and then every turn you can move one to the tracks (which is the pile you'll count up at the end of the game). You can't put out colors you've already got in the railyard, and you can't put out colors someone else has in their railyards, unless you can put out more of that color. Plus you can only put out cards in specific hands, so you have to gather the rights cards to make the plays. Plus if you totally suck, there's no board to flip up in the air and hurl profanities. This sounds like a game my idiot little brother might want to avoid - he loves throwing the board, almost as much as I like profanity.

The fun part, though, is that if you do put out more of a specific color than the guy who's got some out now, he loses that train. In the board game, you might claim a track just to hose an opponent. Now you can claim a color, and make him throw out the card he needed, and hopefully stick him with the unconnected route when you toss out that one crucial train he needed. Of course, you won't know if you hurt him until he has to throw out the card and starts cussing you like you kicked his mom.

The play is incredibly fast. Every turn can happen in 15-20 seconds. You move a train car to the tracks, and then you either draw new cards, play from your hand, or draw new tickets. The game is practically action-packed - or as action-packed as a game can be when you sit on your ass and look at cards for half an hour. If you really want action-packed, take up martial arts. Maybe you can learn to do the splits like Jean Claude Van Damme, and then have threesomes with Drew Barrymore and Alicia Silverstone. But short of that, this is a pretty action-packed game, and let's face it, you're getting too old for the splits, and Drew hasn't been returning your calls (Alicia would return your calls if you could get her a job, though).

There's a lot of depth, too, for a card game. Kids can play, but adults will probably win. Do you play the big pile of red just to hose your opponent, or do you draw that locomotive you need to get from L.A. to Memphis? Do you take that big coast-to-coast trip, or just make another run to Dallas to try to pick up the bonus points? Do you make everyone wait while you return another Mountain Dew to the ground water, or do you just hold it because the game is so fast?

Ticket to Ride: The Card Game is a fun and interesting new version of a classic favorite that is easy to learn, fun to play, and quite clever. I would probably break it out for non-gamer friends when they ask, 'hey, do you have any games we might like?' It's also great for family night, or whenever all the guys who usually drink all your beer and disrespect your toilet cancel just as you're setting up Risk 2210, and the only people who make it are your token normal friend and his latest squeeze.

I had a very good time playing this game, and if you regularly play with people who don't spend most of the year planning what games they'll bring to GenCon, you might just end up wearing out the cards. Go here and get one:
http://www.daysofwonder.com/tickettoride/en/cardgame/
Posted by Matt Drake at 11:30 PM