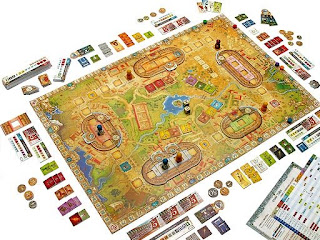 But there's no way you were an ancient Roman, so no matter how much you think you know how to party, you can't hold a candle to a real Roman shindig. Romans knew how to party, and they had the corpses to prove it (even though they probably knew better than to use the word 'party' as a verb). When you play Colosseum, you get to be one of those ancient Roman madmen in the biggest party the Empire has known - and you get to plan the entertainment.

You'll start every turn by investing in your arena. The problem is, you can only make one investment, and you'll want to make more. You might want to add on to the arena so you can fill it up with water and have sea battles, but if you do, you won't have time to install the emperor's box seats, or upgrade an area for season tickets, or read over the latest scripts from the hack writers who keep churning out event plans like Greenwich Village hipsters writing off-Broadway musicals. It's like when you're already fixing the sink and your wife tells you the air conditioner is making that weird thumping sound again, but you can't fix both because you've got the water turned off to the house and you're going to have to go to the hardware store and buy a sackful of plastic washers before anyone can take a shower. Then again, that might only happen to me.

Once you sink a little money into your nightclub-slash-arena of death, you get to hire talent. After all, you can't have a gladiator show if you don't have some gladiators. You might want some lions, but then, chariots might be nice for a different kind of event. A priest might add some pomp to your show, or a comedian might help you sell drinks (as long as you tip your waitress). But the other players might want to hire the guys you need, so there will be messy bidding wars to make sure you get the performers that can draw a crowd. And since lots of these actors are package deals, you'll have to recruit entire entourages, and then swap them with the other players to get rid of the torches you don't need and get cages so that your lions don't wander around eating all the Christians before you can fill the seats.

And then, after all this planning and swapping and trading and shopping, it's time to put on the main event. The Roman Writers Guild will supply you with scripts, but you'll have to supply your own people. One script might call for three gladiators and a chariot, while another might have you recruiting Robin Williams and The Eurythmics for a musically bizarre comedy (which may or may not be hopped up on cocaine and absinthe). The really big shows are expensive to buy and require enormous casts, but they sure can draw a crowd. If you can get the emperor to drop by, you might have the hottest show in town. You'll be invited to all the right dinners and get your pick of all the best orgies.

Of course, there's always a reckoning for putting on a big show - this isn't Vegas, this is Rome, baby, and they party for keeps. Every time you put on a show, somebody dies. It would be a pretty lame gladiator show if you didn't have some blood, you know? And just because this is that kind of party, even if all you do is hire a couple musicians and float them around on pleasure barges, somebody still ends up six feet under. You know you've got a wild party when you can't even recite poetry without a body count.

So back to the grind you go - put in some new season tickets, buy an event program, hire talent, and do the whole thing again. You've only got so many chances to show off before the emperor remembers that he still wants to enslave Gaul and gets back to work, so you have to really crank it up. You better put on the best show in town, because when the party ends, the only one who gets remembered is the one who drew the biggest crowd. Everybody remembers Studio 54, but nobody even knows what happened to the first 53 studios.

Just like Romans knew how to raise the roof, Days of Wonder knows how to make a game. Colosseum has instantly hopped into my top twenty, and I can't wait for another chance to play it again. The pieces are absolutely exquisite - it's like a box full of toys, and there's even a magnificent storage tray so that everything goes back in the box (Fantasy Flight could use some pointers in that department). It takes planning and luck to win this one, and an early mistake can kick you in the jewels for the whole game, but even if you don't win, you'll have a blast playing Colosseum.

Cons:
Can't think of one. No game makes my top 20 if I can think of serious cons.

The only way Colosseum could be more fun would be if it had mosaic pornography, and then you couldn't play it with your kids. Go here and get yourself a copy - you'll be glad you did:
http://www.daysofwonder.com/colosseum/en/
Posted by Matt Drake at 11:48 PM

GAH!! I wasn't going to get this game but your review made it sounds like something some of my friends would enjoy.

Wow, nice post,there are many person searching about that now they will find enough resources by your post.Thank you for sharing to us.Please one more post about that..

Hi, thank you for sharing this great info. Was just browsing through the net in my office and happened upon your blog. It is really very well written and quit comprehensive in explaining with a very simple language.