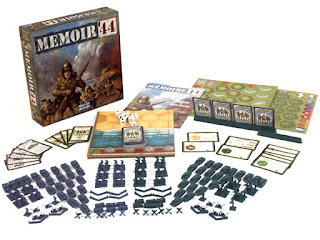 It's a well-established fact that war is awesome. Guns, tanks, paratroopers, barbed wire, sucking chest wounds, dismemberment, and permanent shellshock - that's good stuff. Well, it may not be as awesome if you're actually in a war, but there can be no doubt that games about war are awesome.

And if you want to make an already awesome game (being a game about war) even more awesome, you need the mother of all wars - Dubbaya Dubbaya Aye Aye. More games have been made about World War II than all other wars combined (that is a completely undocumented statement, incidentally, and could be totally false). And the reason all those awesome games get made about that awesome war is because games about WWII are the pinnacle of awesome.

Memoir '44, for the uninitiated, is the WWII entry into the Commands and Colors series of games. Other games in this series include Battlecry (about the Civil War, which sadly was not as awesome as World War II), C&C: Ancients (which lets you play as Carthage or Rome - nowhere near as awesome as WWII), and Battlelore (which loosely spoofs the Hundred Years War, but is more fantasy than anything else, and that is considerably less awesome than WWII).

Memoir '44 uses the same three-flank map and command card system as the other games. Since I expect all my readers to have read everything I ever write at this site, I'm not going to describe it, but in case you missed it, you can find a rundown in this review. It's a really awesome system that is quite flexible and adapts easily to a variety of wars, including the awesome WWII.

Unlike Battlelore, the dice have different sides for the different unit types. Where Battlelore makes you roll red, green, or blue, now you're rolling stars, infantry, armor or grenades. Shooting at infantry makes you very likely to do damage; shooting at tanks, not so much.

Plus there are lots of cool terrain components, like villages and rivers and barbed wire. Some will slow you down. Some will make you harder to hit. Some will just be awesome, because this is, after all, a game about World War II.

The base game has a bunch of scenarios for letting the Allies fight Germans in France and Germany. As anyone who knows anything about the incredibly awesome Second World War will tell you, there was a lot more going on than just Germany - so that's why there are expansions. There are expansions for North Africa, the Soviet Union, and the Pacific Theater (which, it turns out, is not an actual theater. They don't have movies there; mostly, just killing. Which, because it was WWII, is awesome).

One thing to keep in mind when you play Memoir '44 is that the scenarios reenact actual battles. And even though World War II was awesome, it was seldom very well balanced. Hitler and Roosevelt did not sit down and pick out 500 point armies. What this means is that most of the time, one side has a definite advantage. If it bothers you to play unbalanced but historically accurate battles, you are not awesome enough for Memoir '44. That, or you just need to play one game, then spin the board and play again, this time from opposite sides.

Also, there's a buttload of luck in Memoir '44 (though it's not quite as bad as Battlelore). If luck bothers you, then you should find a game that is less awesome. Maybe a game about baking or carving wood would be more your speed. Someone in Europe has probably used those exciting activities for themes, and then you won't have to be intimidated by awesome games about World War II.

In case you're not getting the general idea here, Memoir '44 is awesome. It's tons of fun, plays really fast, and is all about the most awesome war ever. If you know how to spot awesome, you need to get yourself a copy of Memoir '44.

Cons:
Doesn't even try to be balanced
Has lots of luck

If you like things that are awesome, you should go here and get Memoir '44:
http://www.daysofwonder.com/memoir44/en
Posted by Matt Drake at 8:09 PM

I played BattleLore many moons ago and was not all that enthused with it. Memoir, however, has me by the awesome-sack. I think it's because in Memoir the figures are different colors, which my tired old eyes appreciate, unlike in BattleLore, where you have to rely on the shape of the banners to quickly understand where your troops are. Memoir seems simpler, too. I can play Memoir much better than BattleLore is what I guess I'm saying.