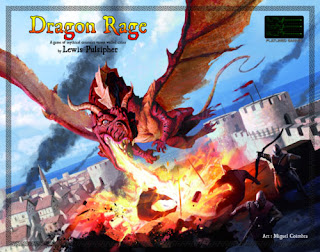 I think Lewis Pulsipher must have a time machine that has transported his mind to 1974 and somehow left his body here with us. That's the only way I can explain making a game like Dragon Rage and then being so proud of it that you turn it into a career teaching other people how to make games as boring as Dragon Rage. Please note that I am not making this up - Lew Pulsipher teaches college courses in board game design. I guess it's proof of that old adage, 'those who can't do, teach.'

Dragon Rage is one of those archaic games that comes with cardboard squares and hexes with numbers on them so you can call them out in the rules. In the game, a couple dragons attack a city and try to wreck it while the people in the city kill the piss out of them. It's dry and boring and unattractive, and includes - I am not exaggerating here - more than 50 pages of rules. This is an outdated gaming model. For the sake of comparison, when most gamers gave up these boring kinds of games, The Beejees were still popular.

The game has virtually nothing working for it. There are multiple scenarios, so you can try one where giants attack the city or humans attack the orc town, but in every case you could be playing something fun instead. Wargames have come a long way since 1982, but this game has not. Look at Conflict of Heroes - that game uses cardboard squares, and it's a blast because it is updated and relevant. Dragon Rage, by comparison, was a boring game the first time it was printed, when I was in high school, and it is still boring today.

Turns are lopsided. The dragon turn takes maybe two minutes, as you move your two counters, perform a couple attacks, and call it a day. The city dwellers, on the other hand, take very long. They move their 15 or so guys, counting off road spaces and maneuvering around towers and walls, and then roll dice a dozen times. If you're playing the dragons, this is tedious. If you're playing the humans, it's still tedious because you are unfortunately still playing Dragon Rage.

If you're going to make a game where dragons fly into cities and burn stuff, and you're not making this game in 1977, you are virtually obligated to include plastic. I could have tolerated Dragon Rage if it looked cool. It could have had plastic dragons and plastic soldiers and a plastic wizard. Would it cost more? Of course! Would I buy it just for the plastic? Yes, unless it had Lew Pulsipher's name on it.

If Dragon Rage had simply been a boring, unappealing box full of dead-weight cardboard, I would have been content to pan it and walk away. But fortunately for me (and it is fortunate because of how much I love to mock), the worst thing about Dragon Rage is not even the game. The worst thing about Dragon Rage is that it opens with a full-page Ode to Doctor Lewis Pulsipher, written by… Doctor Lewis Pulsipher.

Rarely in my life do I have an opportunity to see such a self-aggrandizing pile of tripe as the first page of the Dragon Rage rules. This is a full page detailing the life and accomplishments of the guy who made this boring-ass game, including his bragging about having made another game I never had any desire to play, and how he now teaches college classes about making games. Obviously, teaching classes about making games does not make a person an expert in making games. Also, the college in question is not actually named. It is my theory that this is because Doctor Lewis Pulsipher teaches game design classes at Bumstick Vocational Junior College in Backwater Spitbucket, Virginia. And if I taught there, I would not brag about it, either.

I am staggered by the sheer arrogance and self-importance required to produce a piece as thoroughly irrelevant and pointless as the first page of this rulebook (which, incidentally, includes a portrait of the man, so that if you meet him in person you can drop to one knee). Reiner Knizia could get away with this. I like to mock Reiner for making games I don't like, but honestly, the German doctor is a bad-ass, even if many of his games blow goats. And Reiner never felt the need to include a retarded fluff piece in one of his games. Maybe because if you have to tell people how awesome you are, then you clearly are not.

So don't buy Dragon Rage. Stay far, far away from it. If you see people playing it, make the sign of the cross and move quickly away before you get some on you. I'm not even going to offer you my copy of the game. Instead, I am going to wrap it in chains, drive a stake through the box and bury it face-down in consecrated ground. (It's not really that bad. It's just really boring. But I have been looking for a good excuse to make that game-killing joke.) And if you ever meet Lewis Pulsipher and forget to call him 'Doctor,' don't worry. He'll remind you.

Cons:
Boring, unattractive, bulky, and slow. The game is also bad.
Also, not fun at all

I think it goes without saying that I am not going to link you to where you could buy this god-awful game. Instead, here is a photo of Lew Pulsipher, so you can either point and laugh or go out of your way to avoid him.
THE WACKY PROFESSOR
Posted by Matt Drake at 4:20 PM

Yeah, I understood that. Guess I was not as clear as I should have been, but I did mention it was first published when I was in high school.

I can't say I disagree with you on the last four paragraphs though. I find it easy to ignore, but it still bugs me.

I think he has some experinces in the videogame industry (more than with boardgames, having only published two games AFAIK), which might be the reason for his teaching position.

What bothers me more is that he mentioned one time that he tried modern-day-Euros twice or three times and didnt like them (thats fine of course) and now feels inclined to explain why they (yes all of them) are inferior to classic American design games (yes all of them). His analysis of Eurogames are so flawed, he even gets panned regulary for it by his supporters.

He also wrote a book, Game Design: How to Create Video and Tabletop Games, Start to Finish, and maintains a blog on BGG called "Pulsipher Game Design." All pretty much due to one convoluted game he designed 30 years ago. He has really milked Britannia for all it's worth.

Yeah, it's like I said - those who can't do, teach. It looks to me that his primary talent lies in the realm of bullshitting.

Oh, I also like that he has a Wikipedia entry... created by himself. I encourage everyone to feel free to edit it.

His game "Britannia" is really great and deservedly a classic in my opinion. It may be outdated (or not) but it is a simple and beautiful design and very, very theme-y. It depicts the invasion of the British isle by a lot of people and does a good job at it. There are no hookers, dragons or machine-guns in it, though.

That does not change, of course, that he is very convinced of himself...

Now you know why the game is awful!

I might use that, actually. Lulzipher. Has a ring to it. And it's funny. Lolsifer.