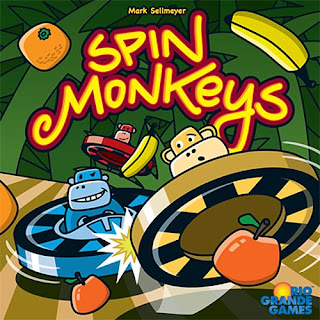 When I started Drake's Flames, Rio Grande used to send me a lot of games. Then they stopped, mostly because I was rather disparaging of one of their games. Then, several years later, I asked them for a particular game and they sent me three other games instead. This was my chance to make good, to get back in with one of the biggest game companies in the world so I could get free games from them again!

Well, so much for that. I got three games from Rio Grande, and all of them suck. Someone probably thinks some of these are OK, but not me. Because, as I may have just said, I think they suck. I don't think I'll probably even bother to ask for more games. It's reasonably safe to assume that I am burning that bridge once and for all.

Of the three games I recently got, Cavemen was the best of the batch, and it just had some major balance flaws and some questionable art. But the second one, the one I'm about to review, is really stupid. It's called Spin Monkeys, and instead of being a cutthroat game about managing public relations for out-of-control rockstars and politicians who are cheating on their wives, it's about actual monkeys. Which is doubly sad, because on top of being disappointed that the theme is dumb, now I totally want to play that game about the PR guys.

But alas, I'm stuck with the game that actually exists. In Spin Monkeys, you're each playing a monkey who has come out of the jungle and invaded the carnival. The bumper cars are all set up, and to sweeten the deal, someone has put fruit all over the floor. So naturally, you (being the monkeys) jump into your bumper cars and drive hell-bent for leather to pick up as much fruit as you can. Because that happens.

You play Spin Monkeys by choosing cards that tell you which direction you will head on your turn. If you want to play a sharp left, you play the 90 degree card. Or go the other way with the 270 degree card. Or don't bother planning at all, because someone is going to run into you anyway and you're going to get sent spinning in a random direction and it won't really matter what you played.

Once you get moving, you get to pick up every piece of fruit you can drive over, and then eat it real fast. You can tell that you are eating the fruit because if you grab a banana, you leave the peel behind. That would only happen if you are eating the banana, not just collecting it. This is important for two reasons. First, it's important because if you hit a banana peel, you go spinning in a random direction. Second, it's important because other monkeys can steal your fruit.

If you're squeamish, you may want to stop reading now. Because what I figured out was that if the fruit is being consumed, and if other monkeys can steal your fruit, then what they are actually swiping from you is fruit you have already eaten. Which means they are stealing your poop. It also means you have a wildly accelerated metabolism, because you're able to pass a banana in less time than it takes to say, 'pass a banana.' These are incontinent monkeys, and so what they steal from each other is even more unappealing.

I grant you that you do not have to sign off on the poop-eating monkeys to play Spin Monkeys. It is, in my opinion, the only explanation that makes sense, but you could just pretend the monkeys are peeling the bananas, throwing the peels and then stashing the fruit. I suppose that is also an option. But since I did not like Spin Monkeys, I am sticking with the excrement theory.

Scatological humor aside, Spin Monkeys is just a random act of chaos. Your decisions don't matter, because random elements will alter the outcome regardless of how well you plan ahead. You'll be hit by an opponent, spin out of control, then bounce into a banana peel and wind up stuck in a corner like that kid from Blair Witch. Planning is pointless. Strategy is essentially impossible.

Spin Monkeys is still better than Robo Rally, because you only have to plan one card at a time, but that's not high praise because I absolutely hate Robo Rally. On the other hand, Spin Monkeys doesn't force as much intellect. For one thing, you'll figure out early on that it's meaningless to try very hard, and you'll decide that you may as well smoke that bowl now, because you'll play just as well stoned.

Cons:
Utter chaos
No good reason to plan ahead
Rather plain art

I can't imagine why you would want to buy this game, but in case you do, you can find a copy here:
http://www.coolstuffinc.com/p/183462
Posted by Matt Drake at 9:08 PM

Sometimes utter chaos in games is a good thing, it helps relax the mind and this has that in spades, but this game also seems to drag on about 1/2 hour too long for us. You think you are about to end the game when WHAM! some random jackass of a monkey knocks you 7 spaces away. We've had fun with it in small portions, but you can't take it seriously or you will end up ripping the head off the person sitting next to you.