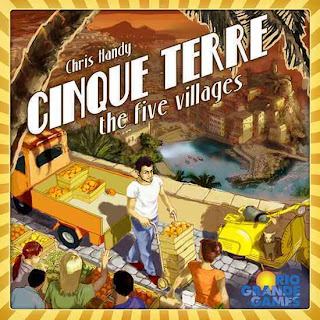 I might as well get these Rio Grande reviews out of the way. There's one more to discuss, and then I can get back to not playing European games unless they come out of France (French people make awesome games with dead bodies and demons and naked chicks - all things I readily endorse in my games).

So the last of these dead-fish Euro games that Rio Grande sent me is called Cinque Terre. In English, this means Heavy Poop, or literally 'sinking turd.' The game is called that because if you drop it in the toilet, it will fall to the bottom, and you will be glad and want to flush it…

Wait, sorry, I'm being handed an updated memo. It seems Heavy Poop was a bit of a prank by the boys in tech support. Cinque Terre is about five villages. Ha! Good one, tech guys!

OK, so there are these five villages on the coast of Italy, and they are freaking beautiful. They're built in terraces, almost inaccessible by car or plane, with stunning geography, picturesque vistas and charming architecture. These five villages are famous for being almost completely unspoiled by corporate intrusions like Exxon and Starbucks, and are thus quite the tourist attraction.

And according to Rio Grande, they're also really into fruit. Because in Cinque Terre, a game about five amazing locations that are almost lost to time, you're going to sell fruit out of a motorized wagon. If that sounds like a grievous waste of a perfectly wonderful theme, then I think you and I are on the same page.

Still, reading the rules, I was kind of looking forward to playing this game. It seems like a quaint thing where you harvest fruit and sell it in the various villages, taking advantage of increased demand and specific fruit orders. Unfortunately, it's not that. Unfortunately, it's actually just work.

Cinque Terre - a game supposedly about five of the most beautiful and charming locations in the northern hemisphere - is a logistics exercise. The way you win this game is by carefully planning ahead, making the most efficient plans and thinking six steps ahead. I like games with some planning. I don't like games where planning IS the game.

Here's a little of the nitty-gritty, so you can understand what I'm talking about when I say this is basically like having a job as the dispatcher at a trucking company. On your turn, you can travel from one location to the next, harvest specific types of fruit with specific cards, then sell specific fruit in specific villages to fulfill specific fruit orders. And all the time you're doing this, you will absolutely, under no circumstances at all, interact with the other people who are playing this game with you. It's not even fair to call the other players your opponents, because nobody is actually opposing you.

I wanted to like Cinque Terre. I did some homework, looking up the region online, reading about how it's hard to get to these villages and looking at photos that made me want to give up my day job and move to Italy. If the region had featured in the theme in any way, I might have loved it. But there's no reason this stretch of beautiful coastline has to be the least bit involved in this game. You could make the same exact game about shuttling farm animals around small towns to enter them into livestock contests.

I don't need another game about picking up wooden cubes and taking them other places. Unless people are going to shoot at my car as I hustle fruit across enemy lines, this game is going to be so ludicrously dull that I would rather just balance the checkbook. It's about the same amount of work either way, but at least keeping up with my finances will be good for something. And neither thing is fun.

That does it for the Rio Grande games, and I'm glad. I won't be asking them for any more games, because even if they don't hate me all the way to Hell and back for panning the crap out of every review copy they sent me, I don't actually want to play their games. I know they sent me three under-performers, and I know they do have some games that are better, but I can't be bothered to care. I want death tolls and hookers, and until Rio Grande decides to make some games for immature grown men, I think I can stick with Asmodee.

Pros:
A game named after a really beautiful part of the world
Some decent production value

Cons:
The beautiful part of the world does not feature in the game in any way
The decent production value is mostly just lots of wooden cubes
The game is a boring logistics exercise
I would rather mow the lawn

Don't bother playing Cinque Terre. Instead, look at these amazing pictures and tell me you don't want to move to Italy.
MUCH BETTER THAN HARVESTING FRUIT
Posted by Matt Drake at 8:08 PM

Thanks for that. I'm a gamer and a walker. I've been to the region and have done the 5 villages trek twice. It is one of the most beautiful places in the world. I was going to buy this game based on my love for the region but now not bothered. Seems a shame that they did not theme it.

I am so jealous. I see places like Cinque Terre and desperately want to visit.

Also, I am surprised and delighted that anyone was considering this game. It makes me happy to know that I've saved at least one person some money.