Board Game Review - Lords of Waterdeep 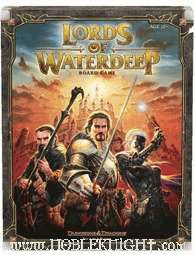 If you were to tell me that Wizards of the Coast was going to make a D&D game about ruling the city of Waterdeep, I would not have been surprised. But if you told me that game was going to be a worker-placement Euro-style game, I would have laughed at you and told you that you were insane. A dry Euro game can't be a D&D game! Euros are only supposed to be about farming and making recipes and delivering the mail! The granddaddy of dungeon crawl games is not supposed to spawn Euros. It's supposed to spawn violent games with too many rules, and with the right crowd, sexual innuendo and half-naked women with gigantic metal weapons.

Obviously, the guys at Wizards did not ask me for my opinion. Which is good, because otherwise they would never have made Lords of Waterdeep, and I could not have played it, and I would not have discovered how much fun it is. On the other hand, I would not have been forced to admit that I don't know everything. Of course, that's easier to do at 41 than it was at 19, when I would rather put my hand into a wheat thresher than admit that I was not actually smarter than my parents.

I'll get this out of the way, right off the bat - Lords of Waterdeep is definitely a Euro-style game, and it's definitely dry. Sure, you can recruit a band of warriors to purge tentacled horrors from the sewers of the city, but mechanically, you may as well be preparing a recipe for chili pie.

The theory is that you're in charge of some ruling group in the city of Waterdeep, and stuff comes up and you have to protect the city. You send out your agents to recruit adventurers and build taverns and find worthy quests, but you never actually get your hands dirty and kill something. You sit back in your ivory tower, drinking mimosas and dabbing at your guyliner while you send your minions into the city to do your bidding.

Happily, the minion-sending part of the game is actually very compelling. You've got all these things you can do, and places you can go, but you're in constant competition with your opponents. If you need a cleric, for instance, but the Harpers get there first, you'll have to send an agent to go pull some dirty tricks that let you steal guys from other people, because otherwise you're going to have to wait until the enemy agent goes out back to take a leak.

This results in the first layer of semi-artificial interaction - blocking your opponents. This is the most passive-aggressive game idea ever invented, and for some reason, Euro people don't mind that. I suspect they also learn how to let out heavy sighs and specialize in making you feel guilty when you ask them if they could pay for their own coffee this week. If this was the only interaction in Lords of Waterdeep, I would hate this game an awful lot.

There is, however, a second layer of interaction that is a great deal less artificial - the intrigue cards. Using these cards, you can directly screw with your friends. You can swipe their adventurers and steal their gold. You can sneak in behind them when they think they've blocked the builder's hall. You can assign them jobs that they have to complete before they do anything else, which ends up costing them resources and time. In a game where you never have enough resources or time, that's pretty damned mean-spirited. So I loved that.

The combination of blocking your opponents and directly hosing them makes for a game that has just the right amount of interaction without being so nasty that your wife won't play it with you. If the D&D folks are going to make a Euro, at least they made one that isn't some boring, solo circle-jerk. Where many games of this nature have you pretty much ignoring what everyone else is doing, the key to enjoying Lords of Waterdeep is in carefully scrutinizing the other players. Is the City Guard building an army for a massive warfare quest? Quick, give them a mandatory job that will kill off half their fighters! Is the sneaky mage chick running magic jobs like they were going out of style, revealing that she is almost certainly hiding a bonus for arcana gigs? Better run up there and reset those quests before she can snag another one!

I'm not going to pretend that your average blood-and-guts fan is going to love Lords of Waterdeep. The interaction is there, and it's exciting, but there's no disemboweling warfare. There's subtle intrigue and careful maneuvering, combined with reading your opponents and guessing their moves before they can pull them off. You'll have to plan ahead and build contingency plans for when those nasty Red Sash assholes steal your high-dollar mage's tower or hire all the thieves. You must be prepared to counter the underhanded attacks on your own grand designs, and keep an eye on every other player, all the time. And don't count the money until the game is over - in one game, right as the game ended, one player revealed a hidden bonus and shot from last place to a huge winning margin. She snowed us all, kept her head down and avoided looking like a good target, and snuck past us to make us all look like drooling chumps.

I really enjoyed Lords of Waterdeep, and can see myself playing it a lot more. It has some problems, like the fact that it could just as easily be about filling orders for potted plants, but in terms of providing the kinds of things I like to see in a game, the game delivered. Heck, it may give Flash Point some competition for family game night favorite. So what if it's a D&D Euro - it's a fun game.

Pros:
Requires good planning and clever execution
A sweet spot of interaction that's not too nice, and not too mean
A Euro game that actually requires you to read your opponents, not just stare at their cards
Perfect for family game nights or weekend gaming clubs

Cons:
A theme as rich as D&D should never, ever feel pasted on

So now that I like this game, you're thinking of buying it, and just need to find a good price for it. How about saving ten bucks on it? Yeah, that's right, Noble Knight Games has it at one hell of a discount.
SAVE ON THE LORDS
Posted by Matt Drake at 2:04 PM

I, too, was surprised about this game. Months ago I thought this was going to be a different sort of game and when it was revealed to be a euro, my heart sunk.

Luckily, the game is fun and while the theme could be a bit better integrated, fans of the older 2nd ed Forgotten Realms setting can really appreciate this game because it centers the theme around that period instead of the later wastes of time Forgotten Realms background became.

I had written off WotC to make decent games based on D&D after the Ravenloft/Ashardalon/Drizzt series of Adventure system games, but after playing this and the playtest Version of Dungeon Command* my faith is renewed and WotC is no longer dead to me.

* Ah yes, Dungeon Command. Now THIS is a game to look out for. Prepainted mini skirmish game that can be used by D&D roleplayers, the fans of the Adventure system games and is a stinking good tactical combat game. If the finished version is half as good as the playtest was, this is sure to be an ameritrashers dream come true with such a nice theme attached to it.

I'm incredibly excited for Dungeon Command. I hope it rocks, because I want to spend a ridiculous amount of money on it.

I can't believe the great hype this game is getting all over the internet. And I just keep hearing how fun and accessible it is. I'm really surprised that a game that, at least if you just read off the rules, sounds like a boring cube pushing fest, is consistantly touted as one of the best of the year so far. My copy is in the mail, I hope it lives up to the reviews.

I really think this speaks to a sometimes unvoiced desire that people REALLY value elegance and simplicity in games. Another example would be Eciplse and all the praise it has garnered. As much as I might think I want the really complex heavy games around, the simple ones seem to get more actual play.

Should I get this or small world or flash point?

For my money - not Small World. I don't care if I play that again.

But Flashpoint is a really fun co-op. And this is a fun Euro. So that probably won't help you much.