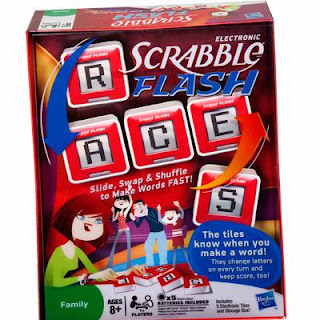 That was about the only thought I put into the entire idea, until I received a game called Scrabble Flash. Now, I'm not a fan of word games, and I find Scrabble painfully dull, but this appealed to me because it was all gadgets. The game is composed entirely of five electronic tiles, and when you line them up and turn them on, letters pop up on the little screens. Rearrange the tiles to create words, and the five tiles track how many words you've made.

This is almost ridiculously cool. The tiles detect when they are next to other tiles, and remember which words you have already spelled. Like if you spells 'PANTS' and then remove the S, you can score again, and then remove the P and you can score again, and then put the S back in, and you can be a little confused unless you're taking the time to follow along at home with pencil and paper.

If you get bored of using the same five letters over and over for a minute and a half, you can try one of the other games. You can try the game where you get five letters and only a few seconds, and you have to spell a word with all of them before time runs out. If you succeed, the letters change and you can do it again. Keep this going, and you could get a score of 20 or more. My personal best so far is 4. Apparently, I am not very good at this game.

The problem at this point, however, is that these are not exactly group activities, and I play board games because they let me hang out with other people (which is especially odd when we consider what a misanthropic shut-in I am most of the time). So to create a game that you can play with a group, there's one more option. You can choose the third game, which is like the second game, except that when you successfully spell your five-letter word, you pass the tiles to the next player, who hits the button and gets five letters of his own. If he can't do it, he's out. Keep going until there's only one guy left, and you will know that he is the biggest dork in the room. He will still probably be proud of himself.

I still don't like Scrabble, because to me, it's a little too much like work. However, Scrabble Flash appeals to the part of my brain that wants to do something for five minutes and then be distracted by something shiny. I can break it out while I'm waiting for dinner, play for five minutes, then put it away without a second thought. Or I can challenge my kids to a quick game and be humiliated within a matter of seconds with my inability to parse the English language. It comes in a handy black case, so putting it away takes less time than it normally takes me to pick out a pair of work socks.

So Scrabble Flash got me thinking about the possibilities for using electronics in board games. I mean, I just review Monopoly Revolution, which uses a fake credit cards to keep a balance and do away with money, and now Scrabble Flash actually knows where each tile is in relation to the others. The future is rife with possibilities - miniatures games that spot range and line of sight, board games that know when one piece is close to another, and even the ability to simulate true fog-of-war in a war game, by having the pieces find out accidentally if they just stepped on another guy's testicles while tramping through overgrown corn fields.

Unfortunately, there are not a whole lot of people who can take advantage of technological advances this way. Hasbro had to have spent a ton of money figuring out how to make Scrabble Flash, and hired expensive programmers and engineers. Until someone else actually makes it work, other companies can't afford to do this. Maybe Wizards of the Coast, but then, they're still Hasbro, aren't they? Nobody else has the budget, the manpower and the financial pull to make this stuff work this well.

However, it won't stop them from trying. The problem is, the smaller publishers (by which I mean anyone who isn't Hasbro) will have to assume that their customers have stuff that's not in the box. There are already games that make you use a laptop, which is great unless you're 14 and you don't own a laptop. Or games that have an assist from an app on your smartphone, and let's face it, we don't all have those, either. Hasbro doesn't have to make you install an executable on your Windows machine, because they include the fancy electronics in the box. So why doesn't everyone else?

Because they can't. Hasbro can make a game out of five electronic tiles because they've got two things that no other publisher has. One, they have budgets so high they can hire engineers, and two, they have such an enormous market share that they could publish Electronic Turd Burglar and sell half a million copies off the shelves at Target.

For now, you can enjoy the cool factor in Scrabble Flash. It's cool and fun and makes me actually want to play word games, which is remarkable because of how little I like word games. And at some point in the future, when the stuff Hasbro is doing takes hold and everyone can afford their cool gadgets, you'll see card games that plug into scanners to have blind face-offs, or dungeon crawls that make creepy noises and have monsters ambush you out of nowhere.

1 player, or as many as you want if you play Game 3

Pros:
Super cool gadgets
Actually an engaging word game
Play for as long as you want, then stop when you get bored
Near instant setup and clean up

Cons:
Will hold your attention until you see something more distracting, like a USB-enabled sex doll

Scrabble Flash doesn't appear to be out just yet. But once it is, you should totally get it.
Posted by Matt Drake at 6:48 PM

This is a cool little game. Somehow I can never make every possible word from the letters they give you...

This is cool technology, based on MIT research and a company called 'Siftables' - which is probably licensing the Scrabble Flash technology to Hasbro.

The TED video on Siftables is well worth watching.

haha dirty old man, thats hilarious! I agree with Jim, I can never get all the words... and some of the words I guess arent even words (that ive ever heard of anyways). I got this game thinking it was gonna be like text twist. text twist is much more fun since you can see the number of words left to guess, whereas this game you only find out when your done. Im sure this is just a starter scrabble flash game and newer better ones will arise in a few months/years. Its still fun. funny blog... usb blow up doll! hahaha!