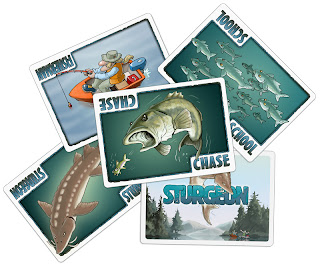 Come with me on a magical journey into the mind, where we will think deep thoughts about important questions that settle deeply into the minds of all gamers. The first question we shall examine is perhaps the most important ever to be presented. Namely, who thought breeding fish in a lake would make a fun theme?

Well, OK, ignore Go Fish. That doesn't count, because you can play it with a deck of cards, and as we all know, any games you can play with a standard deck of playing cards are inferior in any way that matters, and appeal only to the unenlightened masses who play poker and bridge and canasta. If those games were fun, we would play them. They have to suck, or they would have listings at BoardGameGeek.

To veer back onto topic (which is really unnecessary, because the original topic is pretty silly anyway), consider Sturgeon. No, not the big fish, and not a misspelling of the guy who gives boob jobs when your rack is lopsided or flat (not you personally, yours are very nice). I am referring specifically to the game from Minion Games where you try to breed two gigantic fish in a lake. It's a cute game, enjoyable in short bursts, and probably a good game for the kids, but it still has one glaring flaw. And that flaw is that you are trying to breed to big fish in a lake, and they don't even eat any people or jump out of the water and bite a car in half, making the theme less exciting than actually fishing, which is a pastime I tried once before I figured out that the main draw to fishing is the option to drink heavily. In the absence of hard liquor, fishing is not an interesting way to spend time.

So the fish in Sturgeon do not eat people, which is unfortunate. They do, however, eat each other, and this is how large fish are created. See, when a man fish and a woman fish love each other very much, another bigger fish comes along and eats both of them. So two minnows can be discarded to let you play a trout, and two trout can be recycled for sturgeon food. Two sturgeon could probably be eaten by something like Nessie or celebrity chef Paul Prudhomme, but once you have two sturgeons, you win.

You can also eat other people's fish, by sending your own fish swimming around the table. Opponents can hide their fish in weeds, but then you can just swim a little more. And every now and then, a fisherman comes around and catches sturgeon, which totally blows if he gets yours, and is awesome if he gets another guy's fish. There are enough little side things happening to make the game interesting without being deep. In other words, you could play this game with eight-year-olds and not want to take your own life.

(A quick aside to Chinese printers offended by my generalizations and stereotypes: Bite me. If I ever print a game, I will not be printing it in China. Also, I always wear a belt.)

There isn't a whole lot of game in Sturgeon. This is obviously true in the case of the actual fish, but it is also true in the light card game of the same name. It is a fun game, cute, not terribly difficult and not very deep. It's perfect for children and people not looking to make a huge mental investment in a game. It's a good family game, especially if your family won't play Agricola.

Pros:
Cute art
Cute theme
Easy to learn and play
Enough interesting decisions to keep adults playing until it's over

Cons:
A little shallow (which would stand to reason for a light game)
Unfortunate card stock falls apart while you play

Minion Games has copies of Sturgeon that you can go buy right now. Never mind the crappy cardstock - if you need a light game that you can finish fast without too much mental stress, run over and pick it up:
http://www.miniongames.com/sturgeon.html
Posted by Matt Drake at 6:26 PM