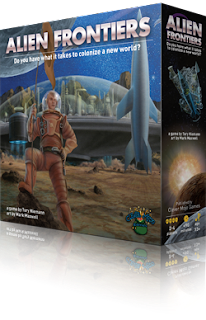 I think it's time I raved all about the brilliance of small-press games. Specifically, I want to rave about Alien Frontiers, one of those incredibly rare cases where a pint-size publisher proves to have some serious staying power. The first game from Clever Mojo Games, called Ogre Castle, was fun, but it smacked of small-press corner-cutting (a cloth game board seems like a neat idea, but it's really just a neon sign that says, 'we can't afford to pay the printer'). But Alien Frontiers is not only great for a fledgling publisher, it could hold its own against anything cranking out of Rio Grande or Mayfair.

And I'm not just saying it's a good game, either. Everything about the production of Alien Frontiers stands tall and demands to be taken seriously. The art is absolutely brilliant, not only because it's fun to look at, but because it delivers the theme with more consistency and clarity than you'll see on 75% of the games you could buy at your local game store. The board has a delightfully smooth matte varnish. The cards have that sweet linen stock that makes them really durable and easy to shuffle. Even the dice are bright and chunky and attractive. This is one slick product.

Even if the eye candy sucked, Alien Frontiers would still be a really fun game. The object of the game is to settle an alien world. Each player gets a handful of colonies, but you can't just put them on the board. You have to develop them into colonies, or convert your ships into cities, or get really lucky and come across a ready-made colony waiting to happen. You'll need fuel and ore to build colonies, and you'll need them to make more spaceships, which you'll need in order to grab more resources that you can turn into more spaceships and more colonies.

The twist, and the reason Alien Frontiers is so damned much fun, is that your ships are represented by dice. At the beginning of every turn, you gather your fleet (which means you pick up your dice) and deploy them (which means you roll them). Then, depending on what you roll, you place them at the various orbital facilities around the planet to do stuff for you. You might put a 5 at the solar converter to pick up some fuel, and put a 1 and 2 at the lunar mines for some ore. You might use a set of doubles to start work on a new ship. You might use a 4-5-6 as a raiding party and go steal the stuff you need from the other players. You could even dump some dice at the alien outpost, to grab up the swanky cards that let you do stuff like change your dice or clear out the space you need or maybe just send freeze-dried steak dinners to the astronauts.

Basically, Alien Frontiers is like a cross between Yahtzee and Carcassonne, but without the near-obligatory medieval theme that seems to dominate every third game that comes out of Germany or England (the French, God bless 'em, seem more prone to making games where demons with machine guns fight flying robots for control of horrifying deathtraps, which is why I have a hard time hating the French). When you execute a well-planned turn, it comes together like a thing of beauty - use two dice to buy a card, use that card to bump a die, use that die to establish a colony and grab a bonus, use that bonus and another die to score an indecently enormous stack of fuel cells, then finally use those fuel cells to re-use one of your dice and establish yet another colony and steal points from the guy in the lead.

Which brings me to another reason Alien Frontiers is awesome - you can totally screw with people. And you can do it a lot. This isn't just the Agricola thing where you grab the cow to keep your buddy from putting it in his living room. I mean, you can do that - put a 6 on the moon mines and you'll block everyone else until your turn comes back around - but you can also straight-up ruin people. You can steal their cards. You can kick them out of their colonies. You can eliminate the bonuses they get for controlling an area. You can do just about anything short of standing up and kicking them in the privates, and depending on your regular gaming buddies, you might be able to do that, too (though that's not in the rules, and I wouldn't normally recommend it unless you play with some really useless bastards).

So I'm raving so much about Alien Frontiers that half of you are thinking, 'as soon as I finish reading this, I have to go buy a copy.' Well, before you rush out and spend your hard-stolen currency on it, let me warn you - if you like games where prepainted miniatures take turns shooting off each others' faces with plasma rifles, and hate any kind of game associated with phrases like 'resource management' and 'worker placement', this will not be your bag. It's not dry, by any stretch of the imagination, and it's certainly not some boring, multi-player solitaire economics simulator. However, it has a lot more in common with Puerto Rico than HeroScape, so if you're not able to enjoy the kinds of games that tend to be translated from German, you're not going to enjoy this one very much. Essentially, if a different publisher made Alien Frontiers, it would be Rio Grande, not Fantasy Flight.

If you're in the market for a slightly brutal family game with great art, killer components and nearly addictive gameplay, you should definitely check out Alien Frontiers. It's fast, smart, fun and pretty, and is a definite sign that Clever Mojo Games is going to be a serious contender in the endless contest to gobble up our gaming dollars.

Pros:
Fantastic art channels space pulps from the 1920s
High-quality components show a commitment to quality
Easy rules and fast play
An excellent mix of long-term strategy and quick decision-making
Plays just as well with two players as with four
Everyone has a chance to win until the game is over

Cons:
Feels pretty European, which is not a con unless you hate games that feel European

You can't buy Alien Frontiers yet, but you can pre-order it from the publisher. If you do, you can save ten bucks, and at the same time, support the kinds of people we want making games:
http://www.clevermojogames.com/alienfrontiers/
Posted by Matt Drake at 8:31 PM

"... but without the near-obligatory medieval theme that seems to dominate every third game that comes out of Germany or England (the French, God bless 'em, seem more prone to making games where demons with machine guns ..."

Exactly mate. This comment makes me laugh and I wander if the German publishers finally realize that excitement comes from future rather than the past.

Unfortunetly the Geramn publishers have declared that "SF doesnt sell" which is true for the German mass market at least.

2-4 players - welp, that leaves this one out of the regular Friday night rotation, where we normally have 6-8 and no one ever wants to split into two separate groups. Might eventually pick it up to add to the arsenal of 2 player games I inflict on my boyfriend as after-dinner fare.

If you have to inflict your games on a guy, you should trade him in. There's an ocean of dateless geeks out there and I'm sure your odds are decent that at least two of them are acceptable enough to take out in public.

Matt...Thanks for the great review.

Sharon...We're working on two different expansions that would allow up to 6 players. If we sell out of the first 1000-game print run then the expansions will move forward.

@ Wind Lane - my choice of words was more ironic than anything. My sweetie is just as geeky as me, and likes all sorts of board games - our dining room is home to shelves upon shelves of games :)

@ Clever Mojo Games - I look forward to seeing what you come up with!