Expansion Review - Wrath of the Elements 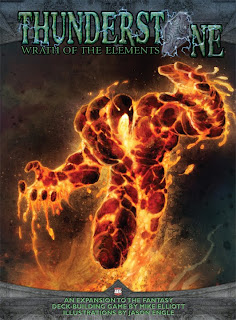 I reviewed Thunderstone a few months ago, and decided that it was 45 minutes of fun, which would be great if it didn't last an hour and a half. When I got Wrath of the Elements, the expansion for Thunderstone, I was optimistic. I wanted to like Thunderstone, and really hoped the expansion would fix all the problems.

Really, my main issue with Thunderstone is that so often (and by 'so often' I mean 'every frigging time I play'), it feels like the dungeon critters are too damned hard to kill. You need to have a good light source, a couple powerful heroes, and some kick-ass weapons to defeat the really tough enemies, which would be fine except that I never seem to have all those things in the same hand. My deck can have plenty of light - but then I never get a hero. I might have all the weapons I could hope for, but never any light sources. And if I do manage to put together enough heroes in one place, it's all I've got in my hand.

So what ends up happening is that you spend turn after turn trying to draw and get everything you need in one hand, but you never really manage it, and wind up irritated and bored after spending half an hour cycling through your deck.

The new dungeon dwellers in Wrath of the Elements do not make this any better. Some of these bruisers are really hard to kill. It's not just that they're powerful, either - I mean, they are, but they also have requirements like, 'you need magic attack and weapons and then all your clerics die.' So you finally get lucky enough to draw the cards you need to kill something, and then all your good cards get killed. Like it wasn't hard enough to clear this out before.

However, if you already like Thunderstone (and are good enough at it that you can actually build a deck that kills things), there's a lot here that you're going to like. Take the horde, for instance, a bunch of bad guys of increasingly violent persuasion, and you score points based on how many you can kill. Or the traps that can kill your heroes or disease everyone or suck away your victory points like a line of cocaine on a bathroom mirror. Or the guardian who actually leaves the dungeon and starts attacking the players, destroying cards every turn.

The new stuff you can buy is also pretty cool. The warhammer is a good weapon, but give it to a cleric and send him after some zombies, and he's a powerhouse bad-ass. The creeping death spell can not only weaken the monsters, but in sufficient quantity, you can clear the entire dungeon in one play. The amulet of power can let the weakest heroes equip great weapons, and what's more, it glows like a beacon, letting you ignore light penalties far into the dungeon. The new heroes are also a blast - the blind monk can get immensely powerful by destroying all the light sources, and the gladiator can equip multiple weapons with a ludicrously high strength (and in some cases, even use weapons from other players). These new cards also create a lot more interaction, because stuff like the tavern brawl actually lets you attack other players with the cards in your hand.

One thing I really liked was the huge variety of optional rulesets and game types. You can play solo now, or you can play campaigns where you basically play two games in a row and take your total score from both. There are actually quite a few variant rules that you can use to mix up your games, bringing new life to the game in ways I personally hadn't considered before.

But you still have that pesky problem where you end up going around the table, round after round, wishing someone would just kill that tough SOB in the first spot so you could get something to happen. Happily, we came up with a solution for that, too - we house-ruled.

Now, I normally never review a game and include a house rule, but our rule turned the game from an exercise in frustration into a really exciting experience. We simply added one more option for your turn - now you can rest, visit the village, delve the dungeon, or prepare. When you prepare, you discard as many cards as you want, and redraw that many, and then your turn is over. This new rule found extensive use, and we proceeded to play the best game of Thunderstone I've ever seen. No more discarding the one hero you need because you couldn't pull light. No more buying the crappy weapon because you can't afford the good one. Just lose a turn, and come back to it next time.

I would never play Thunderstone by the written rules if I didn't have to, because I don't think it's very much fun. Or rather, I haven't ever enjoyed the second half of a game of Thunderstone. But with this one tweak, Thunderstone (especially with the awesome stuff in Wrath of the Elements) turned into a game that I would play on a regular basis. Suddenly, I would rather play Thunderstone than Dominion, and I adore Dominion.

The final summary here is that if you like Thunderstone, you'll love the expansion. If the original irritates the hell out of you, Wrath of the Elements isn't going to make it any better. But if you've got a copy hidden away somewhere gathering dust because it bugs the piss out of you to play it, try it with the prepare action. You might find yourself in the possession of a game you actually want to play.

Pros:
Lots of new stuff in every category
Same awesome art
More interaction than before
New variant ways to play

Dogstar Games doesn't have Wrath of the Elements yet, but I can only assume that once they do, they'll have a good deal on it. I'll keep you posted.
Posted by Matt Drake at 2:32 PM

I like the Prepare idea, but I wonder if it should be limited in some way, such as only doing so 3 times in a game, or buying a Prepare Village card or some other method. I'm definitely going to give it a try, though, when my set arrives, and mention it to my group next time I play.

Fun review, as always. But that expansion cover art reminds me of this: http://powerminers.lego.com/en-US/Movies/tv-animations/tv-animations-happyburpday.aspx

Somehow the cover art fire dude isn't so scary after seeing his primary weapon (at the end of the film clip).

Prepare seems like a good idea. We enjoy the game but do get frustrated by the length sometimes when an unbeatable creature is at the front. This should speed things up.