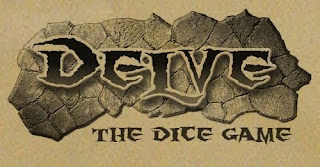 Here's a little primer on how to be completely unprepared for a week of game reviews.

1) Schedule your gaming for a Saturday morning, have a bunch of multiplayer games ready to go, and then somehow arrange it so that nearly everyone cancels. Thanks to illness and generally being wicked busy, my usual Saturday group wound up with only two of us, and me without any two-player games ready to play.

2) Get busy yourself. I spent the weekend doing a bunch of other projects, including assembly of a print-and-play game I intend to review, probably next week sometime, assuming I have a group next weekend.

3) Get sick. This is especially helpful if you want to miss an update and instead, spend two days in bed. I've just now felt well enough to come turn on my computer.

All of these factors combined in a sort of perfect storm, meaning I'm rolling up on Tuesday night, missed my Monday night review, and none of the games I have are ready to review. So rather than come up with some lame excuse, or write a diatribe I made up just to fill space, I'm going to tell you about my favorite free PnP solo game, called Delve: The Dice Game.

While this is not a review of some hot farming game or big-box extravaganza, Delve is definitely a fun, if light, little game. It's also ridiculously affordable, being free. And where most PnP games will require you to print and assemble tons of components, all you need for Delve is the adventure sheet and the rules. You can start playing after printing two sheets of paper.

You'll also need a good-sized handful of dice and a pencil. Then you sit down at the table, and spend fifteen minutes rolling dice until you either lose all your characters or win. It's a fast game that you can finish while you're waiting for your kids to get dressed for church, especially if, like mine, they insist on coming out of their rooms wearing dirty jeans and then complaining bitterly when ordered to change, and then spending even more time when you make them go comb their hair because they look like they slept outside.

The gameplay is actually pretty simple. You've got four characters, each of which allows you to make combos with the six dice you'll roll. Like most dice games, you keep a few and reroll a few, looking for dice combinations that result in the greatest number of hits. Do you push your luck and go for the wizard's chain lightning, or just count on the fighter's low-brow direct damage? Are you wounded enough to sacrifice some damage for the cleric's healing, or should you pour all your dice into the rogue's crippling strike to drop the giant in one round? Choose right, and you'll kill every skeleton for three miles; choose wrong, and you'll want to have some lube handy.

Obviously, as with any dice game, there's a lot of luck here. If the dice hate you, you're going to die before you get halfway through, and if your luck is ludicrous, you're going to win without breaking a sweat. The monsters hit on lucky rolls, too, so you could wind up rolling total crap and getting destroyed, or you could mow through everything like wet toilet paper and finish off the boss wondering why this was a big deal. But most likely, you're going to be challenged, you may lose someone, and it could go right down to the wire.

There aren't a huge number of decisions to be made in Delve. You're going to roll dice. That's about it. But choosing the right combination with the right dice at the right time is key, and is important enough that if you finish an adventure, you have enough sense of accomplishment to have enjoyed yourself.

The main downside to the game, in all honesty, is that it lacks replay value. Once you finish an adventure, you could play it again, but it will be boring. You'll have to print a new adventure every time you want to play it, but you probably won't bother, because there's not much point in doing it twice. On the other hand, there are several adventures to choose from, and they're all free. Some are better than others, but it's worth playing through the whole batch. And if you're feeling particularly industrious, you could create your own, and maybe even whip up some of your own characters. Who knows, maybe a half-dwarf druid is just what you need.

All the files for Delve can be found at Board Game Geek. Just search on 'Delve', and it'll pop right up. It's free, fun and fast, and thoroughly worth the time and the sheet of paper you'll spend on it.

1 player, who is probably waiting for his wife to finish getting dressed

Pros:
Quick dice game
Fun and fast, with a few tricky decisions
Free, with virtually no components to create yourself

If you need a game you can play by solo while you wait for your wife to finish her makeup, you can download all the Delve files here:
http://www.geekdo.com/files/thing/43691
Posted by Matt Drake at 5:40 PM

Before anyone says anything, yes, I've gone back to the old summary. The ratings were not working out at all, and frankly, it was too much work.

I like the "old summary." And thanks for the reviews; I've found some real gems thanks to your reviews.

Thanks for dropping the numbers. This is better and funnier.

Have you tried the advanced Delve? More heroes and random encounters, still free. The Geek has the links if folks are interested. Still free!

Thanks for bringing back the old format.

I agree with Anonymous. I was a fan of Delve, but I got bored of the single adventure. Advanced fixes that and it is at least twice as fun.