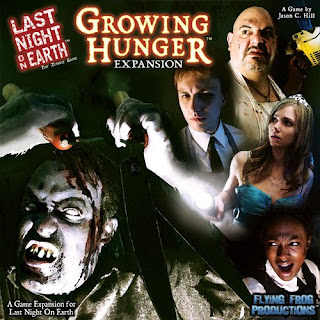 One of my favorite games of all time is Last Night on Earth. I've never played that game and not had a total blast, even when the humans mop up the zombies like spilled orange juice on a linoleum kitchen floor. I've played every scenario at least once, and many of them a lot more than that (I really like the one where the survivors have to protect the manor house, especially if I'm the zombies, because it's so crazy easy to kill them when they're all stuck in one place). It's like every game is a story.

But since I've played the game so many times, it does get a little repetitive. I know all the cards, all the pickups, and how often I can count on seeing Just What I Needed save the survivors from certain doom. It's still crazy fun, but it might be nice to try something a little different. And that's why I was all excited to get Growing Hunger, the first expansion for Last Night on Earth.

People will sometimes quibble about what makes an expansion worth producing. Some people say that an expansion should take the game in a new direction, provide new ways to think about the game, or somehow reinvent it. Those people are going to be really disappointed in Growing Hunger, because it doesn't do any of that. And if you were expecting a whole new way to play, then you should probably be playing something else. Last Night on Earth may have lots of stuff you could add in to trick it up, but when the rubber hits the road, it's pretty darn simple. It's not a strategic masterpiece of tactical recreation that will force you to use the parts of your brain that you usually reserve for nuclear physics or coming up with good lines to score with hot dames in bars. It's a brilliant game, but the brilliance comes from the story, not a series of well-planned maneuvers and crucial decisions.

So it's no surprise that Growing Hunger does not provide any twists that make Last Night on Earth play completely different. Instead, it gives us a whole lot more stories to tell. You'll get three new scenarios and four new heroes, all with enough information to turn your zombie game into a new kind of horror movie. There are lots and lots of counters, and you'll probably never use half of them because the rules for them didn't come out until later expansions (I didn't make that up. They really did that. I know, it sucks). There are new map boards, so that you can finally investigate the grocery store that was oddly absent from the original town. And most important, there are a bunch more zombies.

Now, if you play Last Night on Earth a lot (and haven't heard anything about Growing Hunger, maybe because you live in a cave), you'll probably be saying, 'Hey! That doesn't help! You can't have that many zombies in play anyway!' Well, there's one more thing Growing Hunger brings to the table - lots of optional rules. These optional rules can be used to customize your games, and they also see use in the new scenarios. The zombie apocalypse has the zombies all over the map now, which helps because they're going to need them to take over the world. Which is what they will do, unless the heroes can stop them.

In fact, when you add in the optional rules with the new scenarios, there are now lots of new ways to stories to tell when you play Last Night on Earth. The new rules don't reinvent the game or turn it into a whole new beast. Instead, they allow you to tell new stories, and since the reason you're playing in the first place is to see how the story goes, Growing Hunger is just the kind of expansion this game needs.

The new map boards are pretty cool, too, especially because the pickups are more than the old 'get something out of the discard pile'. If you're not worried about running out of hero cards, you can hit the Piggly Wiggly for some extra supplies - but watch out, because zombies are spawning out of the walk-in freezer. And if you desperately need a card to be back in the draw pile, you can run to the antique store and shuffle it back in there. The new maps add more options to the game, meaning more potential stories.

It's not all awesome, though. My biggest complaint is the fact that they've included a bunch of counters that aren't even referenced in this box because they want you to buy the next three expansions, which should have been one expansion, but got split into three boxes so they could make you pay three times. Of course, if you actually do pay three times, that's your dumb ass. It's not like they're selling heroin to school kids. If you don't want it, don't buy it - and I don't want it, because I think that sucks.

A minor problem, and one that will iron itself out over time, is that the optional rules and new cards are going to give rise to lots of 'wait, how does that work again?' incidents. Last Night on Earth already suffers from a bad case of look-something-up, which is kind of inevitable but a bit of a pain in the ass. When you add in the new rules, mix in some new buildings, and toss in a bunch of new cards, you're looking at a whole new batch of questions that will send you to the FAQ (I'm assuming there's an FAQ somewhere. I don't know, I just make up the rules as I go).

Ironically, both my negatives could also be considered positives, and since I totally love Last Night on Earth, that's what I decided to do with them. Instead of bitching about getting stuff I can't use, I'm going to be excited because I got extra stuff. And rather than complain about the new layers of complication, I'm going to be excited to explore new ways for my zombies to eat hapless high-school athletes and promiscuous porn stars. And when I look at it like that, add in all the new ways to tell a crazy zombie story, and toss in the free Web scenarios you can get from the Flying Frog site, Growing Hunger is one of the best expansions I've ever owned.

If you play Last Night on Earth enough to have played every scenario, you really ought to go get Growing Hunger. Dogstar Games doesn't have it right now, but I'm sure you can get it somewhere. I traded for mine.
Posted by Matt Drake at 6:37 PM

Love this game, and I don't get to play it often enough.

I don't think the extra bits in this game has anything to do with future expansions -- as I understand it, it is just to have extra stuff to make your own home-grown scenarios.

Really effective data, thanks so much for this article.