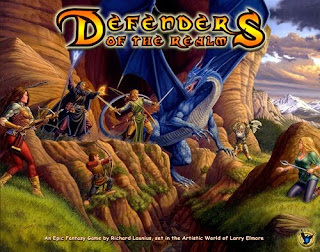 I'm not normally a fan of cheese in my games. I kind of like my games to be like the cheese shop in that Monty Python sketch - you know, completely uncontaminated by cheese. Tight design, efficient rules, and a damned good reason for every part in the box - these are marks of a good game. Using those criteria, Defenders of the Realm should be a failure.

Somehow, though - and I don't know that I could say how - it's not. In fact, it's an extremely fun game, complete with Stilton, Camembert and Limburger, and maybe a little Venezuelan Beaver cheese. It's a cooperative game designed using almost all the same ideas you see in Pandemic, but where Pandemic is efficient to the point of feeling sterile, Defenders of the Realm is campy, almost sloppy.

The first sign that this game is long on cheese is the rulebook. Every so often, as you read through the rules, you'll stumble across some blatantly obvious errors of written English that threaten to confuse you. And if those grammatical and typographical mistakes don't throw you off, then you're ready to pull out some crackers and have some appetizers. The rules are peppered with quotes ostensibly coming from the evil monster generals marching on Monarch City. These masters of wit have such lines as 'count on it hero meat' and 'not gonna happen!' Apparently the authors felt that the best way to convey a powerfully thematic atmosphere would be to include taunts invented by third graders.

Then you get to the art. Now, this is about to be a slightly unfair criticism, because a couple decades ago, this art would have been the cat's pajamas. Sadly, Larry Elmore is a fine artist, but his stuff looks so outdated today, he might as well put leg warmers and shoulder pads on all the girls (and in at least one case, he did). The art is obviously skillfully created, but it also looks like most of it came right off a D&D calendar page from 1987. And that's not all - the board is covered with these huge circles connected with dotted paths, and these circles are the different areas of the board. I hate to be obvious, but would it have been so bad to actually create a map? Maybe it would, actually - this game board is covered up in quality fermented curd.

The object of the game is to kill the four monstrous generals - the demon, the lich, the dragon and the orc. These bad guys will destroy the land, spread like a virus (yeah, I meant to do that), and march on the capital city. If one of them makes it to the city, you lose. You also lose if you have to place a minion and you don't have any. You also lose if the land gets totally ruined. You also lose if you succumb to the foot-like odor of fine cheese, because you'll miss the chance to play this really fun game. It's a desperate fight, and you have to be vigilant if you want to win. A little luck won't hurt, either.

Your heroes are mostly yanked right out of a second edition Player's Handbook - the barbarian (who, by the way, looks like an 80s Lita Ford), the cleric, the ranger, the wizard and the rogue (though we used to just call them thieves). All have great art by Larry Elmore, if by 'great art' you mean 'stuff that was awesome when we all wanted to look like Huey Lewis.' They also have cheesy super powers, but unlike Pandemic, which has tightly crafted abilities that must be used to their absolute maximum potential, these are just helpful a lot of the time, and sometimes, they kind of suck. The dwarf is great against dragons, but anyone can go ahead and fight them. The powers are important, but not crucial, except for the wizard, who will save your ass so many times you'll put him in every single game.

And apparently, no attempt was even made to balance these heroes. The rogue, for instance, is incredibly useful, but if you pull the paladin, you'll be cursing your way through the whole game. Some heroes should be considered mandatory, and some should be shoved back in the box and ignored. Take the heroes who look the most like cheesy LARP characters, and you'll do just fine. Wait, no, they all look like that.

The game gets more intense as you destroy more generals, and by the end you may be just one bad decision away from complete destruction. Even with their generals gone, the minions keep cropping up. It's actually kind of messy, with lots of room to make stupid mistakes and correct them later, as long as you're lucky. It's fun, and not too hard, and not too easy. It does take a couple hours to play, especially if you win, but you probably need time to digest all that fine cheese anyway.

Defender's of the Realm is kind of messy. The art is good, but outdated and dorky. The rules are sloppy, and the 'flavor' they added smells like ballpark nachos. And yet, even with the chaotic design and ridiculous design decisions, Defender's of the Realm is one hell of a lot of fun. It's a lot more fun than Pandemic, not in spite of the cheese, but because of it. It's not clean, but it sure is full of flavor.

Dogstar Games does not carry Defenders of the Realm, which is an enormous oversight on their part, because it is so damned much fun. I figure you can probably find a copy somewhere, if you put your mind and your credit card to the task.
Posted by Matt Drake at 4:42 PM

It's hip to be square.

Really enjoyed this, thanks. My 15 year old self wants a poster like that.

I still like Elmore's art and prefer it to more contemporary stuff at times. This one really scratches a nostalgic itch for me. I just might have to get it.

What a wonderful article!

Guess all those signed and framed Elmore posters me and my boyfriend have around the house mark us as being hopelessly lost in the 80's, then. :)

It sure does, Sharon. Your day-glo green leg warmers are calling you. ;)

Jazzercise to Duran Duran's "Rio" and you have a recipe for awesome!