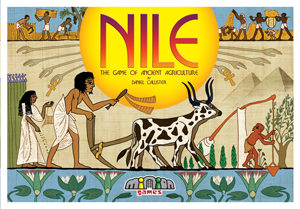 My last review discussed Legitimacy, a game that can be labeled a disaster in just about any way that counts. And that's unfortunate, because Minion Games actually has some design chops. I can tell there's some smart in there somewhere, because one of the other games they sent, Nile, is very good.

Nile is a card game, Euro-style. You're all trying to plant a wide variety of veggies, which would be a lot easier if the river didn't keep flooding and locusts would just quit eating your wheat before you could harvest it. There are several elements that combine to make Nile a bit of a nail-biter, and a group of smart gamers could really get a kick out of it.

I do have one serious complaint, and I'll get this out of the way right off - the cards absolutely suck. Not the art, because that's actually pretty good, but the actual physical stock on which the art is printed is complete garbage. I'm not sure that's just a metaphor, either - the cards actually seem to be created from pressed industrial waste. They crumble, crack and fall apart while you play, making shuffling more destructive than simply holding a lighter to the box. That's one hell of a downside, honestly, and might be enough reason all by itself to make you avoid this otherwise very fun game.

My suggestion would be to buy the game and just sleeve everything before you play. You may want to hermetically seal the sleeves, just for good measure, and maybe heat-press them flat to remove air pockets, but if you protect the cards, you're likely to enjoy the game. There are five crops you could plant, but you can't plant unless you can beat the other players, and you can't plant them if the Nile has flooded that crop type, but if you have them when the river comes washing over them, you can harvest them and score some points.

That's not all, though. You have to decide whether to hang on to your cards or trade them for new cards (and in the process lose a lot of cards). You have to decide whether to plant the crops you can plant or speculate on where the next flood will strike. You need cards to play, but you can waste time trying to get them if you're not careful. There's a careful balance that must be achieved, and since the winner of this game usually wins by a one-point margin, you have to be on your toes.

As the game progresses, you'll have a widening variety of crop types, and you'll get more focused on the crops you really need to win. It's pretty obvious at any given moment which player is ahead, but like I said, you're never ahead by much, and one slip can totally blow all your plans. Which brings me to my second complaint - the locusts.

Three times during the game, a swarm of locusts is going to blow through the valley and eat the biggest crops. In this case, the players who thought they were about do pretty well are going to wind up with nothing, and probably be a little bit pissed. A completely random draw can destroy all your careful planning and smart card play, and it's mighty damned irritating. In fact, when the locusts destroy everything you've built for the third time, you might be of the opinion that the locust card should be removed from the game entirely. I'm fairly positive there were several thousand Egyptians who would probably agree with you on that point.

However, locust card notwithstanding, Nile is a very smart game. There are a lot of times you're going to call your friends bad names, which is the mark of a fun game. Play poorly, and you're guaranteed to lose, which is another good sign. Play well, and it just means you've got a fair shot against everyone else. It's a shame Minion Games decided to find such a crappy card printer, because Nile shows just how good their games can be. It's smart, fun and tense, and that means a fun game where I'm from.

Pros:
Excellent card game with constant difficult decisions
Neat art
Everyone is in the running the whole game

If you're in the mood for a tense, smart card game, and you don't feel like spending a mint, you can run right over to Minion Games and get yourself a copy of Nile:
http://www.miniongames.com/nile.html
Posted by Matt Drake at 8:32 PM

Well, you can always avoid the locusts by not having the largest fields. It's not like the rest of the game is particularly fair anyhow...

I like this one, but the trading in rule should be changed to only twice per turn if you ask me. We have had a lot of games where someone is ahead and they have a lot of cards and keep trading in 2 for 1 and plow through the deck forcing the game to end faster then the others would want it to happen - and way to fast IMHO.

I don´t think you covered the coolest part of the scoring? You need at least 1 of every resource or you will probably lose, I have had a lot of games where someone had way more cards then me in there scoring deck, but of only 4 resources so that 1 card of the 5th resource was the winning card for me ( or someone else ).

I didn't have a problem with a lot of trading. If you play well, you can get a lot of cards, and because of that diversity of winning conditions, you need very specific cards. So the key for us was, once you've got at least three or four crop types, get a ton of cards so you could plant the one you need.

I did love the fact that the win came down to diversity. Just planting a lot was not enough - you had to have some of everything. That's why our games were so close - there's just no point in planting more flax if you already have three. You need whatever you're missing, to the point that we would trade stuff out of our scoring pile to get the cards we needed.

No comment on how the cover art?
I read the entire review expecting a comment on how that guy looks like he is doing what in other games is called "giving wood to sheep" or something like that.