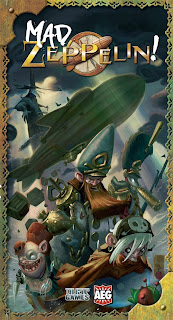 It amazes me sometimes what games make the cut and get published, especially when I look at all the very good free games available to print and play. How do those games not get bought up, and so many stinkers make it all the way to distribution? I mean, some of these games are even published by big publishers who should know better, and yet, I could still go print out a copy of Zombie in My Pocket.

I'm referring specifically to Mad Zeppelin, a game that defies all logic as it applies to publishing. There's a game hidden somewhere in this box, but I'll be damned if I can figure out where. It's got amazing art and a funny theme, but somehow it completely fails to deliver on nearly any level. It's like a really hot hooker that won't have sex with you but still wants to get paid.

It's hard to say what Mad Zeppelin does to give you the gaming equivalent of blue balls. It gets right up to the edge of being interesting, but falls apart when it matters. The story is cool - you represent a rotating cast of miscreants attempting to toss valuable cargo off a zeppelin to the people waiting below, only to get into the cargo hold, you have to bribe the guards. It's campy and silly and looks like fun.

Plus the art is extraordinary. It's difficult to look at Mad Zeppelin and not want to play, because the character art is so expressive and fun that it's almost worth buying just as decoration. Sadly, it's not worth buying if you're looking for a game.

Every turn, you'll get two enemies of the state. This is largely random, so you'll never know if you're going to get the pretty boy with the cheese-eating grin or the sidekick with the abnormal growth condition. Some combinations of cards are great, like the voodoo queen and the old guy in the steam-powered wheelchair that let you guarantee a shot at scoring that turn. Some pairs totally blow, like the strange doctor and the society dame that effectively do just about nothing for their entire turn.

The object is to toss these crates overboard, scoring points for everything you're able to throw, but sometimes the character cards you pull combine with the dice that hate you to make sure you're not able to do anything at all with your turn. Then you have to sit there and seethe while all the other players are chucking cargo like confetti.

The trick of the game, I suppose, is to effectively use the two cards you get to do something impressive. Unfortunately, we never did figure out how to do that, and moreover, we hated the game so much that we never went back to see if we could learn how. This was not one of those where we finished and said, 'Hmmm, maybe with some work, this could be fun.' No, this was one of those games where we said, 'Hey! You've won the game! Thank GOD!!!'

It really is a shame that this one is as great a failure as it is, because Mad Zeppelin is not only a great-looking game with a fairly amusing theme, it's from one of my favorite publishers. Alderac is bringing the heat when it comes to games. They're like the old FOX network, where they would try things nobody else would consider. Sometimes they run Brisco County Junior and the world is better for their existence, and sometimes they have The Ben Stiller Show. But they keep pushing the envelope and putting their best foot forward, so even if Mad Zeppelin is dead on arrival, there's a good bet they've got something else that will blow your doors off. Rush N Crush, for instance.

Mad Zeppelin is one of those games that came out of Dust Games, which means the license is scooting over to Fantasy Flight Games. That probably means that if it is ever rereleased, they'll do it with far too many rules, in a huge box, charge way too much for it, and have about 75 pieces of plastic you don't need. And every game nerd on the planet will fall over themselves to buy one.

Except me. Next time, I'm finding a hooker who puts out.

Cons:
Takes your money but doesn't put out

I was going to post a picture of a prostitute here, but I have to draw the line of poor taste somewhere.
Posted by Matt Drake at 10:46 AM

Just post a picture of Lindsay Lohan. That shit shows up in the New York Times, so it should be cool. And accurate.

The Ben Stiller show was like Ben Stiller's career. One skit would be sublime (U2 playing a barmitzvah; Charles Manson as Lassie) then Stiller would do some dull self-deprecating bit. What's my point? I just think you could have come up with a better counter-example. How about Roc?

You picked a fine time to exhibit taste! :P

I guess the biggest shame, besides this being published at all, is that it was published with such high production values.

Like you pointed out, there are many terrific games languishing with poor production values or not even published at all.

Thanks for taking the time to review it. I almost bought this and you saved me a few bucks. Looks like FFG got stuck with a stinker in their DUST games deal with AEG. Good for AEG I say.