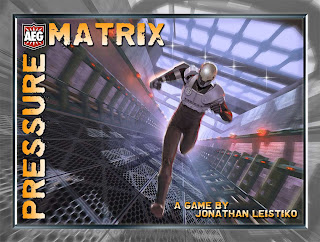 In the future, the game shows will suck.

Well, maybe not all of them. If that old video game Total Carnage gets made into a game show, I'll watch the hell out of it. But if Pressure Matrix is a glimpse of game shows to come, I'll be watching a lot of Wheel of Fortune re-runs.

Pressure Matrix has everyone competing in a contest where you have to run really fast, all over the place, and every turn, you hit a spot and score something. Eventually, the grid gets all blocked off, and then the game ends and the person with the best score wins. The art on the cover is really cool, with this futuristic dude running down a hallway. That art alone made me ask for a review copy, because it looks exciting and edgy and, well, futuristic.

The cover art, sadly, was the last time I enjoyed Pressure Matrix. Because as soon as I opened the box, I started feeling bad. Not like, 'man, I feel bad because I pushed you out of a plane and the only thing that saved your life was the giant cactus that broke your fall.' More like, 'I just ate three pounds of fried meat and washed it down with spoiled milk, and now I feel bad.' The sinking feeling I began to have was initially caused by the bland, unattractive tiles with lots of words on them that you shuffle to create the board. Then I took those out of the box and looked at the playing pieces, which were brightly colored but were all sculpted as if they were running while carrying a huge load in their shorts.

But the illness really started when I actually played Pressure Matrix. One of us actually said, 'I think I would rather have a root canal.' Personally, I would rather play an annoying board game than have oral surgery, but I completely understood his meaning. This game is painfully bad. Not scrape-your-jaw-with-a-metal-blade bad, but definitely bad.

See, how this works is, you roll dice to move around a grid made up of these tiles. Each tile has four things you can do if you land there, from scoring points or costing everyone else points to saving special moves for later. And every time you use a spot, you block it out, and when a tile has all four spots blocked, you can't move there any more. The game is over when you can't move at all, which unfortunately does not coincide with how long it takes you to wish that the game would end so you could stop.

The problems are multiple and rather obvious. At the beginning of the game, there is virtually no way to affect the ability of the other players to move. You can land on the 'make some other poor boob lose points' spot, but that's about as much interaction as you're going to get. You'll roll the dice, spend five minutes looking at the various effects offered by the spaces you might be able to visit, then move and do something irritating. The sky is practically the limit - you can move almost anywhere, because it takes a while before the board gets blocked up enough to limit your movement. There's just not much planning, virtually no meaningful decisions, and to compound the problem, the board is covered with stuff you have to read every turn.

As you approach the end of the game, the board goes from wide open to claustrophobic. All of a sudden, you have almost no moves to make, and if you thought you were short on decisions before, you're definitely limited now. It essentially comes down to whether or not you can move, not where you move, and so there's no decision to make at all. And the decision you make - assuming you have one - has virtually no impact, and requires no planning at all.

Essentially, Pressure Matrix could be programmed into a computer and played out without any human input at all. It's dull and unattractive, and if this is the best game show the future has to offer, we had all better pray for a future full of really good live theater, maybe like that slave girl who dances for Jabba the Hutt. I would watch that, especially if the alternative were watching constipated guys running all over a boring, repetitive checkerboard until they just stopped moving.

I wouldn't suggest anyone actually buy Pressure Matrix. It's got great cover art, but if that's really important to you, maybe you can just buy the poster.

Pros:
Neat art on the outside of the box

Cons:
Everything inside the box

I started looking up images for boring game shows, but you know what happened? I got bored.
Posted by Matt Drake at 2:44 PM

I, like you, was immediately interested in this based upon the box. I saw this being played at GenCon and immediately thought two things, "meh" and a hearty "no friggin' way am I buying that". I am hugely disappointed in this. I sincerely hope that AEG turns things around.

Same designer as Isle of Doctor Necreaux and sounds like similar problems. I'm glad I got your review early on this one.

I can get into the theme, but those mechanics sound completely uninteresting. Makes me want to work on a modular board distopic future game show board game that doesn't suck.

I really hope that the game isn't as bad you you have reviewed, Matt. Because if so, then that means that AEG has given some of their best properties they had licenses for to FFG. And thats just silly pants.

Before hitting post, I sped off to the AEG site to check out the rulebook.

Sadly, it does indeed seem that the games that would have put Alderac properly on the map have been given to FFG.