Board Game Review - A Touch of Evil 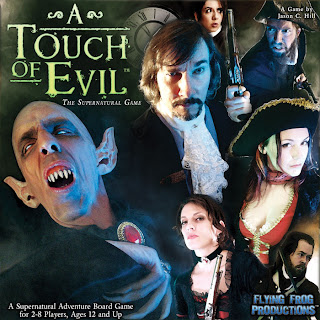 Flying Frog would be Men Without Hats.

Last Night on Earth was Flying Frog's Safety Dance. It's an incredible game that will one day fetch the kinds of prices usually reserved for old copies of Space Hulk and misprinted pennies. The game came out and Flying Frog was off to the races, with a game so hot they couldn't figure out what do with it. So they made expansions and more expansions and the fans kept buying them, and they decided they needed a second album.

And the second album was called A Touch of Evil, and fans everywhere bought the album without listening to any demo tracks, but then when they got it home, they were disappointed and ended up just using the album cover and a credit card to sort the seeds out of their weed.

A Touch of Evil looks like it should be fantastic. It looks like a grade-A winner. More plastic miniatures, more cool photography-as-illustration art, and more heavy-theme wackiness. It even has the CD that you're supposed to play while you're battling evil.

But the problem with breaking out with a killer song like Safety Dance is that the follow-up has to be awesome, or you're going to lose some momentum. Last Night on Earth set an incredibly high bar, and while A Touch of Evil isn't a bad game, exactly, it's certainly no Safety Dance. It has a good beat and I can dance to it, but you won't be driving down the road tapping out the bass line while the guy on the radio tells you about the traffic. You also won't be jonesing like a crackhead to play it again, like I sometimes do with Last Night on Earth.

The idea is solid. You have a team of investigators, made up of a wide variety of characters, and you're all trying to find a way to stop some ancient and horrible evil that is haunting an Early American New England town. You'll check out the windmill and the manor, investigate the covered bridge and the abandoned keep, and fight ghost soldiers, wolves and assorted evil minions. Meanwhile, the town elders will be conspiring with their own secret agendas and the evil will be growing stronger. The dastardly villain will continue to claim lives, and it's up to you to find out where he is and how to kill him.

So theme-wise, this is a winner. It's like playing out that Johnny Depp movie where he fights the Headless Horseman and a whole slew of crazy people. Intrigue, murder and conspiracy are wrapped around this town like a dark blanket. But when it comes to making you feel like you're part of a story - the thing that made Last Night on Earth such a tremendous success - A Touch of Evil just sort of flops.

There are a few reasons why this isn't as fantastic as Flying Frog's first game. For one thing, turns can take a few minutes. You move with a die-roll, check out some location or other, and try to either earn investigation points or spend them to get an advantage over the villain. The problem is that it's a little overly abstracted, and while I get that investigation points represent information you're learning about the monster, I don't really follow how you can spend them to buy a horse. Plus it takes longer than it should, because you're probably reading and playing a card nearly every turn, and if you don't all know what every card can do, it can slow down the whole process.

Then you've got the fact that there are two ways to play, and the default method is competitive. For some completely inexplicable reason, you're all competing to kill the villain, and not working together. I can't see any reason for this, and in a six-person game, all the counterplays and backstabbing and otherwise doing harm to your fellow investigators just slows it down more. It's practically laborious, but you'll find yourself playing it out anyway, just because you remember how great Flying Frog's other game was. It's sort of like how you listen to a second album even though you don't like any of it just because the first time you touched a boob, you were listening to the first one.

It does improve considerably with fewer players, and feels far more cinematic and believable when played cooperatively. It's still not quite as engaging as Last Night on Earth, but when all the heroes are on the same team, it feels quite a bit more like taking part in an unfolding drama. When you're cooperating, you all go visit the evil bad guy at the same time, and then he probably stomps a mudhole in you, because he's way tougher in cooperative mode.

A final complaint, and the one that I think harms Touch of Evil the most, is that the story tends to get repetitive. Sure, there are four different villains, but they basically work the same every time. You send your people to flip cards and learn stuff, then once you've built up enough juice, you go get the bad guys. The bad guy might change every game (well, for the first four games, anyway), but his identity is mostly window dressing. The villain will kill the elders. You'll investigate. There just aren't that many twists and turns, and every story is pretty much the same. In that regard, Touch of Evil just doesn't hold a candle to Last Night on Earth.

But don't count Flying Frog out just yet. Any day now, you'll be able to pick up Invasion from Outer Space, where Martians invade Planet Earth and fight carnival folk. That looks like Flying Frog is returning to their roots. Who knows, that might be their Pop Goes the World.

Pros:
Same fun art style, executed nearly as well, as Last Night on Earth
Mechanics meant to tell a story
Great setting and entertaining cooperative play
I may take some heat for this one, but I like the CD

Cons:
Too many players slows it to a crawl
Not much variation in the stories you get to tell
Competitive play doesn't fit the theme very well

Played with the right size group, A Touch of Evil is a fun game, even if it doesn't measure up to Flying Frog's first outing. If you're interested in it, run over and get it from Dogstar Games, where they have a great discount on it:
http://www.dogstargames.com/product/FFP0201US
Posted by Matt Drake at 2:13 PM

AtoE always seemed like a slimmed down version of Arkham Horror to me. Almost Arkham lite.

Not a bad thing since it takes far less time to resolve and setup/teardown the game than Arkham.

"Investigation" represents the goodwill (or damaging secrets) of the people of Shadowbrook. You beat a minion, they 'like' you more and are willing to help out with inventory, healing, favors. If you uncover a secret, you can leverage that, as well. It is like the 'Wounds' represent fear and damage and the 'Shadow Track' represents the unnamed Shadowbrook population (whether they are dead, cowering, turned evil or left town).

The reason for competative is that the Heroes don't know each other at all - they are strangers to each other and to the town. So, they don;t trust each other enough to work together completely - though they can help out with cards ("I'll Handle This!") and such.

There's a third option besides full coop or full competitive mode, and that's to play in two (or three) teams. That gives you the best of both worlds: you can use some cards to help your allies, and others to impede your competitors. This is where I think this game really shines.

I stumbled inside a gaming store one day, and I thought to myself: "Wouldn't it be nice if there was a Gothic-horror themed game that felt like as Hammer or Vincent Price movie?".

Lo and behold, I saw 'A Touch of Evil' and I just had to buy it.

Maybe some of the game mechanics are contrived, but I love the spirit that it was conceived. It certainly has atmosphere--they even provide a CD soundtrack.