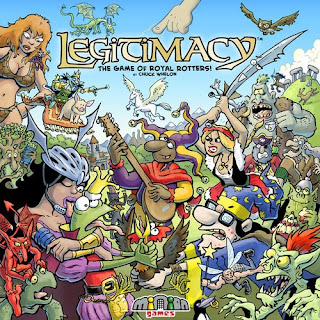 Think about how many people you know. Exclude any that you met just because of games - they skew the data for this intellectual experiment. Your lawn guy, your barber and your mailman - they all count. So let's say you know 200 people you know through the course of your daily, non-game-related life. You probably know more, but 200 is an easier number.

Now think how many of them are game nerds. If you're like me, that number is 1 or 2, and that number counts yourself. Extrapolated to society as a whole, we could estimate that less than 1% of the world's population plays games, especially when we consider places like Botswana, Sumatra, and Kentucky. Last time I went out and counted, there were 6.7 billion people in the world. That means that the world has less than 670,000 game nerds (and frankly, I find that number awfully generous).

So now consider how many game nerds play, say, theme-heavy move-and-roll games. I'm going to say that of those 670,000 people, maybe 10% enjoy games like Talisman. So that gives us more like 67,000 gamers in that particular segment.

Our next step will be to figure out how many of those gamers are in the United States. I could do a bunch of random extrapolation and come up with some numbers, but basically, I'm going to guess that the US holds around 20,000 gamers who would consider playing Talisman. And as I said before, that's awfully generous.

So what's my point? Quality control, that's what. Every year, hundreds of games are published, and for reasons that boggle the mind, many of them thoroughly suck. If you're trying to sell a product to a sub-market that is practically a sliver in humanity's pinkie toe, why would you turn out unoriginal, boring crap? Ego comes to mind, or possibly a complete lack of sense. Other than that, I'm stymied.

I mean, look at Legitimacy. In this game, you're all the illegitimate bastards fathered by the late king, and one of you is about to go out and claim his job. You do this by rolling a die and moving that far. Move the right amount of space, and you may be able to get a card, which will often let you move just a little bit farther.

Oh, and sometimes you stab people.

That's basically the game in a nutshell, but it's not the end of the review, because that would be a stupid review. You might almost think that the addition of violence would make this a potentially viable game. And that would be a complete failure on my part, because Legitimacy is a failure on nearly any level that matters.

Let's start with the components, because that was my primary complaint. Specifically the cards (which make up most of the stuff in the box) are cheaper than anything else I have ever used in my life. I am not making that up. They literally fell apart in our hands. One shuffle, and half the cards broke. Yeah, I said that right - they didn't bend, fold, spindle or mutilate. They broke. After ten minutes, the cards looked like they had been played a hundred times, which was impossible, because nobody would play this more than once.

Unfortunately, the crappy stock was the least of the problem. The cards had more misprints than a low-budget porn mag made in some hacker's basement. There were white strips where the front of one card got printed on the back of another. There were blurry pictures where the colors didn't line up right. There was even one card that was printed once with the correct back of the card, and over the top of that was the front of a completely different card. These were very obviously created by the absolute lowest bidder in a far-away third-world nation. I've never seen worse cards in any game.

The rules were equally offensive. The rules themselves were written well enough, but Legitimacy plays like a mean-spirited Candyland, only without all that colorful cheer. You can get stuck in a swamp and miss every other turn for fifteen minutes. You can wander around picking up random, pointless treasure cards. And then you can walk up to someone and punch them in the face to steal their stuff, except that unless you've got way better cards than they do, the odds are about 50/50 they're going to take your stuff instead.

As a matter of fact, that's what finally ended the misery during our game of Legitimacy. One player finally got sick of the stupid and beat up a few opponents, grabbing enough crown jewels to turn them in for the crown. Then we all cheered, not because we were happy for our friend who had won the game, but because finally, it was over.

To return to my original point, Legitimacy is a perfect example of the kind of game that should have undergone a great deal more critical analysis. The creator probably believed emphatically that his game was fantastic, but someone at the newly-formed Minion Games should have said, 'you know, it might not be best to release a completely worthless disaster as one of our first titles.' If there were as many sports fans as gamers, you could get away with this. But the problem with gaming as a hobby is that the producers of the entertainment do not outnumber the recipients by a wide enough margin, and so when someone scoops a dog turd out of the yard and puts it in a box, they are not going to be able to sell it. Stamp 'New York Yankee's Dog Crap' on the box, and you can move at least a thousand.

In summary, publishers, please exercise a little judgment when deciding what to publish. There are not enough of us to consume every possible game that gets published. We need better games, not more of them. Look at what you're producing, and if it's as bad as Legitimacy, just put it away and try to forget it ever happened.

Pros:
Cute art, when you can see it past the printing mistakes

Cons:
Boring roll-and-move
Cards that crumble like stale cornbread
No reason to exist

Don't buy Legitimacy. Don't even play it if someone else buys it.
Posted by Matt Drake at 2:21 PM

Hahah! Thank you, I needed this today. Gold.

Nile from Minion Games is a pretty good game, but there again the card quality sucks worse than anything I've ever seen. Didn't they play with the cards at all? Even just touch them, as that's just about enough to make them crumble? Amazing.

Hi Drake, thanks for the review of Legitimacy, I appreciate you taking the time to play and comment on it.

I'm really sorry to hear about the quality issues that you experienced with the cards. This is unacceptable & we will be taking the matter up with out printers. Please be assured that Minion Games will happily replace any defective parts that are returned to them.

As far as the game itself goes, I'm sorry you hated it so much. From reading your review I can't help wondering if maybe there were some rules you missed or something. For example, only the stupidest of players would ever get stuck in the swamp. To summarize it as a basic roll-and-move along the lines of Candyland seems to be vastly missing the point. Personally, I think it has more in common with chess... :)

I realize, though, that it really is a game that usually needs to be played more than once to properly understand how it works. Because cards can be played in different ways, players need to get a good understanding of them to get good at the game. More experienced players find that they have a lot of control over how the game plays out. Movement always tends to be a bit of a stumbling block at first for weaker/newer players, but a clever player can always find a way to overcome this. Magic is quite tricky to properly get the hang of - again you really need to have a good grasp of the cards to use it effectively. Also taking maximum advantage of Marketplace well is very important.

Because there are so many ways an individual game can play out, once in a while you do get a round that turns out to be a real dog and vastly in favor of one player over the others, but this is pretty rare. The cards are always there to turn it around, it's all about choosing the right moment to stab your opponents in the back. In fact in most games between experienced players there should be a LOT of back and forth across the table as players attack and steal stuff from each other and there should be plenty of intense dice-rolling. Most games between experienced players tend to end up in a pretty close run fight on the castle steps.

New players sometimes also complain that the game is uneven. Picking pets randomly contributes to this, and it is preferred by advance players. However, if you're new to the game or your group prefer a more 'balanced' start, use the optional rule of selecting pets face-up.

I hope that sometime you might bring yourself to give the game another go and that in time you will see that there is actually quite a lot more subtlety and depth to it than it may first appear.

Anyway, I'm glad that at least one of your group managed to suss it out enough to win -- are you sure you're not just sore that you turned out not to be the biggest Royal Bastard after all??!

No, I like plenty of games I lose. Heck, my regular group is full of smart people. I lose a lot.

Nobody likes a math geek, Scully.

Good news! Minion have managed to get a complete reprint of the cards done on superior quality playing card stock. All new sets shipped will contain the new cards.

If you've had any issues with the cards you received, contact MinionGames.com to get a replacement deck free of charge, or request them from your friendly neighborhood retailer.

Despite what Matt says here, the game has proved to be popular with many players:

I have found that the game has succeeded in appealing to younger players, and it was targeted at a teenage/early 20s audience. Generally I've found that older players seem to find it much harder to get it. That may be because it demands a very creative approach from the players - to play well you need to use your imagination and really see all the possibilities presented to you, and not be to mired down in what the rules allow. To dismiss it as a simple roll-and move game is completely missing the point.

Still, some reviews such as this one did raise a few valid points about problems with the gameplay, so while doing this reprint I've taken the opportunity to make a few tweaks. These new cards really represent a v1.2 of Legitimacy. I re-ordered the decks of a few cards and beefed up the magic throughout. Now the Wizard and Druidess are much more powerful characters. Also, there are far fewer weak cards because I added new magical abilities to some of the less useful ones. Also there are more movement bonuses!

I admit to deliberately designing the game to be annoying and cause a lot of table chat -- or even arguments. So, if you're not prepared to be a real bastard to all the other players, or don't like be subjected to such bastardy from you opponents, then you will definitely hate this game! Otherwise you will love it.

I read so much helpful data above!