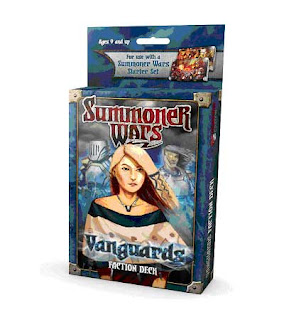 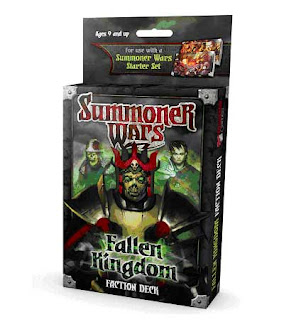 I have to check a calendar, because I would swear my birthday wasn't for a couple months. It sure feels like it, though, because I just got the Summoner Wars expansion decks and I'll be damned if I didn't expect it to come with cake and ice cream, and maybe a lame office party where everyone brings whatever crappy food they either bought at the supermarket on the way to work or threw together the night before, except for that one lady who can actually cook but never makes enough for everyone, so that even when you're the birthday boy, you only get like two bites of the banana pudding before everyone descends on it like a Biblical plague of locusts.

Summoner Wars is a fantastic game all by itself. It might be better than HeroScape, and I love HeroScape (you know, before they changed the bases). It's definitely better than a lot of tactical games you could buy, with layers of interesting game play and incredibly well-tested card powers. If you like games, you should own Summoner Wars.

But then, just because the guys at Plaid Hat Games couldn't let well enough alone, they went and brought us a couple decks of bruisers who make the game even better. Each expansion deck is a new faction you can bring to the table, and just like with all the other factions, they have a very specific feel that makes them completely different and new.

The Vanguard are super-good hero-types, to the point that one of the champions is an archangel. These guys hit so hard they'll knock your pants off, and then you'll have the double humiliation of being beat to death while not wearing any pants.

Traditionally, Summoner Wars units that get hit a lot just sort of curl up and die. But with the Vanguard, you've got priests who can heal your guys, so that the huge bruiser on the front line who is dropping enemies like it was free becomes an even more effective meat shield. Even your summoner is a great healer. Your opponents will be so busy stabbing your champion that they'll never have time to react to those archers who come around the back and tag-team you with arrows until you look like you like that ugly guy from Hellraiser.

And if you're a fan of controlling the board, the guardian knights are going to rock your Pinhead face off. Don't want those goblins picking on the priest? Send a knight to stand next to him, and that pathetic goblin won't have a choice of targets - he has to swing on the guardian. That archangel I mentioned before can fly, so he moves faster than anyone else, and he flies right over anything in the way to stick his incredibly resilient ass wherever it would irritate your opponent the most.

I must confess, however, that as much as I liked the Vanguard, the Fallen Kingdoms are easily my new favorite team. I'm not usually a fan of being the bad guy, but these guys are just a total blast to play. The cards go from 'really cool' to 'fill-yer-pants awesome.'

The thing that makes the undead so fun to play is the ability to swarm the board without depleting your deck. I love playing the goblins, but if my swarm doesn't shut down my opponent early in the game, I end up running out of cards and then standing there like a deer caught in the headlights of a semi truck while banging the truck driver's daughter. But no more! Now I can flood the board and still manage to have cards left when my opponent runs dry.

The skeletal archers are the first example here. When they die, there's a very good chance they go to your discard pile instead of your opponent's magic stack, meaning he's going to need to dump his own cards to fuel his magic stack, making him run out faster than you.

Then add in the zombies. When they kill an enemy dude, that guy turns into a zombie - which enters play from your discard pile. You get free guys that don't run down your deck, and if you play this game, you understand how freaking brilliant that is.

Now add in the summoner himself. His special ability is that he can summon in the middle of the attack phase and bring in guys from the discard pile. Now you get to bring in guys during the fighting phase, and again, they're not coming out of your deck.

But what can you do with all that swarm, you ask? The goblins have a great buddy-up attack thing, and they regularly attack with more guys than should be legal. Their swarm is scary. The undead can't do that.

But what they can do is sacrifice their undead minions. Several cards in the FK deck let you kill your own guys to either reduce the summoning cost for a champion or heal your bruisers. And guess where those sacrificial minions go when they die? I'll give you one guess.

Never mind, don't bother guessing. I can't hear you, and I don't really care what you say anyway. I'll just tell you. They go to the discard pile, which means they're sitting right there, waiting for you to summon them again!

I suppose if you play the Fallen Kingdoms wrong, they would be really easy to kill, especially with the Vanguard. But if you use them right, they're damned hard to beat. I like both decks a lot, but I'll take those creepy undead guys every time. It helps that some of the art looks like it was created while the artist was listening to old Iron Maiden albums and smoking laced Mexican Red.

If you like Summoner Wars as much as I do, you really should get the expansion decks. Maybe you can have a little Christmas-in-July of your own.

2 players, or 4 if you have four decks and want to play teams

Pros:
Each deck has a unique feel and play style
Same great art style that makes the original so much fun to play
They do what expansions should do - make the original game better

Nice to have you back. I just got my two new SW decks the other day. I need to get my boy going on that game. :)

Played with the son tonight and those damn undead just kept comin. My angels and priests couldn't roll higher than a 2... But I learned that the Vanguard Summoner shouldn't hide. She should march across the map with her Champions to put on the beat down.

Hmm, maybe I should'a posted this on my own blog. Ah, you get more readers than me anyway.

I do not have Summoner Wars yet. I plan on getting it this weekend. These new pack sound powerful. How do they balance with the other races from the starter packs?