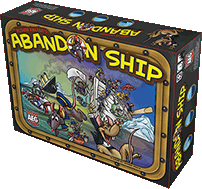 It's a well-known fact that rats have magical powers. OK, in all fairness, not everyone knows that, but that doesn't make it less true. Think about it - have you ever seen a rat who couldn't get out of a pair of handcuffs? No, you haven't, because they're magical. Plus they have really tiny feet.

It turns out that rats are also able to stop a ship from sinking simply by having two of them working together. This was not actually one of the magical abilities that I knew rats possessed, but apparently, Reiner Knizia knows this, and incorporated that simple fact into a game called Abandon Ship.

In Abandon Ship, a bunch of rats are racing to get off the ocean liner before it goes under. Every so often, the ship sinks a little, and when it does, one rat might drown. But if there are two rats at the same level, that's as far as the ship can sink. Because, you know, magic.

Aside from the magic rat thing, Abandon Ship is actually a pretty cool little dice game. I thought it was going to suck, because it was a Reiner game, but I'm a big enough man to admit when a game is fun, even if I do still hold him personally accountable for Atlanteon. There are seven rats, each in a different color, and a sweet sliding board that depicts the ship that's quickly sinking into the ocean. There are eight dice, one for each color rat, plus a white die, and the dice have different symbols that tell you how you can move the rats.

The trick here is that rather than having one rat you're trying to move, you have a secret tile that tells you three rats you have to represent. Get your rat to the biggest scoring spot, and you're ahead. But if your rat is the only rat at the bottom when the ship starts going under, your rat drowns, which is unfortunate for both him and you. Should you wish to avoid this calamity, simply make sure you have a duet of magical rats who can slow the sinkage. I can't say for certain that this magical ability has been documented, but were it not for the power of two that lets rats keep a sinking vessel above the water line, a whole lot more rats would die, and the game would be called Drown On A Ship instead.

Players take turns choosing a die and moving a rat, and if you make it too obvious which rat is yours, you can pretty much count on the other players to move your rat backwards until it winds up going down with the ship. There's a good element of bluffing here, because if you tip your hand, you're hosed. Of course, if you're not lucky, you're still hosed, but it's a dice game. That kind of thing tends to happen with dice. Apparently rats are not magical enough to manipulate your rolls.

There's not a tremendous amount of strategy or tactical brilliance to be found in Abandon Ship. It's a light, fun dice game with a little bluffing and a lot of luck. It's cute and entertaining, and you can finish in less than 20 minutes. And as an added bonus, it's not a boring math game, which separates it from a huge number of Reiner games.

It even comes with magic rats.

Pros:
Fun and cute and fast
Tricky, some nice bluffing, but not too taxing

Cons:
Not a lot of meat. Sort of like a magic rat.

Apparently Dogstar Games is light on magical rats. They aren't carrying Abandon Ship right now. If they do in the future, I'll be delighted to update this link. In the meantime, you can get it at the Alderac online store:
http://store.alderac.com/abandon-ship-p-1164.html
Posted by Matt Drake at 4:24 PM