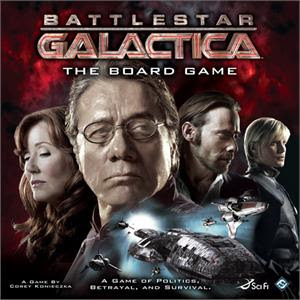 I can't trust you, and you can't trust me. You might be a sleeper agent in disguise. You might have been waiting your whole life to betray me. And I might have been doing the same to you. There's really no way to know for sure. And we might both be honest souls, loyal to the core, and still end up shooting each other just to be on the safe side.

And that's Battlestar Galactica in a nutshell.

Of course, there's a lot more to it than that. Battlestar Galactica (the new one from Fantasy Flight Games, not the old one from back when Starbuck was a dude) is ostensibly a cooperative game. The players are all doing their best to find Earth, with the Cylon horde bearing down on them, attacking them at every opportunity and stealing all the green M&Ms. But where cooperative games like Arkham Horror or Ghost Stories have all the playes working together, Battlestar Galactica borrows a page from Shadows Over Camelot by ensuring that at least one of your shipmates is working for the bad guys.

Every player chooses a character from the show (the new one, not the old one, where Apollo was kind of cool and not a whiny little baby). Each character has different skills and special abilities - Starbuck and Apollo can fly Vipers, Adama is the admiral, and Roslyn is the president, and other characters have other skill sets (sadly, nobody has a cool robot dog). There are other characters, too, who would probably be a lot more familiar to me if I had been watching the show since it came out. But my only real exposure to the show was when I rented the premier from Blockbuster Online, back when I didn't have cable.

You get cards based on your skills - Adama gets leadership and tactics cards, while Starbuck gets cards related to flying and playing a character who is supposed to be a guy. There are five different colors in all, and you'll only ever have two or three colors. At the end of every turn, you'll draw a crisis card, and something bad will happen. You'll have a chance to avert that disaster if you can play the right cards - but if you play the wrong cards, you actually sabotage the effort and can make the humans fail. A very clever destiny deck adds two random cards, so most of the time you don't know if the bad cards came from crappy luck or a sleeper agent trying to kill everybody.

This is really where the game gets intense, and people start accusing each other of everything from blowing up the hangar bay to drinking the last beer. The real bitch here is that it's often nearly impossible to know for sure whether one player is bad - I can protest my innocence, but I'm not allowed to actually reveal my allegiance beyond saying, 'no, guys! I swear that green card wasn't mine!'

Paranoia runs rampant, with accusations flying left and right, until someone does something stupid (or gets hosed on cards) and winds up having to defend himself from being thrown in the brig. When you're the player everyone suspects, you better hope you've got some good cards, or you'll be cooling your heels in lockup, unable to do anything beyond playing a harmonica and bouncing a baseball off the walls.

There are lots of ways for the Cylons to win, but only one way for the humans - jump far enough away that they find Earth (or Kobol, or whatever they call it on the show for the sake of suspension of disbelief). Every time the humans jump, the admiral has to choose one of two crappy results, and if the result really hurts, the admiral might find himself locked up while an actual robot sympathizer takes over the helm.

Battlestar Galactica is a ridiculous amount of fun. I played it a few times before Dogstar Games sent me a copy to review, and every time is intense and wacky and fun. The logic involved in trying to figure out who is a toaster gets positively mind-bending, and even the Cylons are trying to figure out who's loyal. Basestars perpetually plague the Galactica, and Apollo and Starbuck are constantly busy trying to shoot down enemy fighters and repel boarders. And the whole time Boomer is trying to fix up ships, she might just be a skinjob waiting to destroy everybody and ruin the whole thing for the humans.

If you're a fan of the show, this game probably gets a lot better. I can't say for sure, because like I said, I only saw the premier on DVD (and I watched it all the time when I was a kid, but that doesn't count because the only traitor was the goofy-looking Count Baltar, and you knew right from the start that he was no good). But if you're a little more sci-fi educated than I am, you'll recognize all these characters, and then you'll probably enjoy the game even more.

On the other hand, if you're a fan of games where lots of crazy stuff happens, crap blows up all the time, you get in space battles, and you're never sure whether your best friend should be shoved out an airlock, it doesn't matter if you liked the show, you're going to absolutely love Battlestar Galactica.

Of course, I could be just a subversive traior trying to separate you from your money, working for the forces of evil and commercial liquidity. You'll never know until you buy the game and decide for yourself. And even then, I still don't think I can trust you.

Cons:
I could be lying

For a group of gamers who love theme and scheming, Battlestar Galactica will be a surefire hit. And if you want to support this site, you should buy the game at Dogstar Games (and get free shipping!):
http://www.dogstargames.com/page/312338213
Posted by Matt Drake at 3:14 PM

Yes, Starbuck is a chick in this version. However, Apollo and Starbuck probably frakked more in the old series (with that hair, oh, you know it!)

But you and I have been through that, so let us not talk falsely now - the hour's getting late.

Thanks for the review I was dying for it! Unfortunately now you got me NEEDING the game. You suck.

You are NOT lying, although you are a Cylon. The game rocks. The hardest part of the game is finding the 6 people required to play it well.

PS - If you're interested in seeing the entire series, I have it here on DVD...