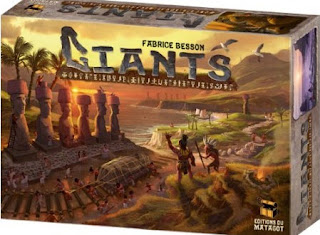 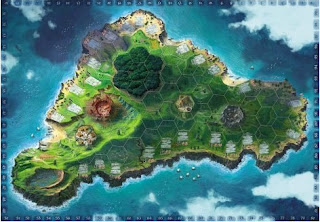 Many years ago, on an island called Easter Island (not sure where the Easter part came from, but the Island part is pretty obvious), there lived a tribe of peaceful people with a fondness for things made out of stone. This actually worked out great, because the island didn't have much of anything except rocks, which gave the Easter Islanders plenty to do in their free time.

Since they had so many rocks, the Easter Islanders would cooperate to make really huge stone heads, often with torsos, and give them hats. Then they would drag these gigantic stone paraplegics to the graveyards located on the beaches and post them as guardians. Obviously, the Easter Islanders were not very smart - how useful is a guardian going to be with no arms or legs? Maybe they were hoping that when tomb robbers came, a very strong wind would blow the giant stone men over onto the robbers. Needless to say, that plan did not work out very well.

In Giants, brand-spanking-new from Asmodee, you get to play as these very dumb people. Just like the Easter Islanders from way back when, you will carve huge stone dudes, fail to give them any limbs, drag them across the island and then put hats on them. The player who drags the biggest statues to the farthest graveyards will win the prestige of being the hardest working moron.

Every round, players will compete to move their statues across an absolutely gorgeous map of Easter Island. You'll have tribal markers, which you will use to bid on the right to make new giant pieces of Art (you know, no arms and no legs, hangs on a wall?), you will trade them for half-tablets that do not cure headaches but do pile up in the kitchen until your wife yells at you to take your hobby into the garage, or mark their statues as they move across the island. You will place workers to carry these monstrous paperweights, and use a couple special tribe members to help out now and then.

Because Giants is trying to emulate the horrendous short-sightedness of a tribe of people who thought it would be a good idea to completely destroy all their natural resources while trying to eke out a living on a barren rock in the middle of the Pacific, you'll also be able to dig huge stone hats out of the ground and chop down the only trees that provide you with any shade, windbreak or homes for the animals you may want to consider eating later. The good news is that you can use the logs from these trees to drag those ridiculously oversized statues all over the place. The bad news is that you will eventually devolve into slavery and cannibalism. Hopefully when some other tribe member cuts out your liver to make a nice stew, you can be buried close to one of those giant guardians.

The game is a constant balance of resources and opportunities. If you place the sorcerer in the village to raise more workers, you won't have him around to get you more tribal markers. You'll need the markers to put on top of your statues after you move them, so that other people can't steal them, and the greatest thing is, they look like little colored toupees. Apparently after the Easter Islanders carved these gigantic, impotent guardians, they decided it would have been nice to give them hair, but the implants weren't working. Even today, you cannot use Rogaine to make hair grow on a rock (unless you also smear spaghetti on it, in which case you can put it in the refrigerator and forget about it until your rock winds up with a beautiful white-and-green afro). So if you spend all your markers on getting magic tablets and bidding on the right to carve giant amputees, you won't be able to put wigs on your statues, and then other people will steal them from you (the Easter Islanders were apparently very superstitious about hair, and would not steal anything with hair on it).

One of the coolest things about the game is the cooperative element. You probably won't have enough workers to move your statues where they need to go, but if you plan the right route, you may be able to take advantage of workers placed by your opponents. If you do, they get points, so often players will place extra workers on the best spots just to pick up a few points for helping carry gigantic stone men instead of building boats and going to a bigger island that might have, say, a sustainable economy. Obviously, Easter Islanders had a passion for helping other people carry gigantic stone things, especially if they were hairy, but not much interest in long-term survival.

This is not an easy game to learn. The rules have a few tricky bits in them (though the rulebook is pretty good), but to understand what strategies will solve what problems, you'll have to play it a few times. It's a little complicated, and understanding the value of chopping down trees versus making stone hats will be very important. There is also a ton of tactical placement, difficult timing decisions, and long-term planning with short-term flexibility. In other words, if you like games that make you think, Giants can fill that bill. It's a little ironic that a game where you play people who thought it was a good idea to bury your family in the sand requires you to be so very clever to win.

One more note about Giants that bears special mention is that the components in this game are amazing. You probably could have guessed that, since it's an Asmodee game, but everything in the box is really, really nice. For example, workers are little plastic men cast in your color - but every color worker is a different sculpt. That's not even remotely necessary, but it sure is cool and adds just a little bit more to a game that's pretty darn cool in the first place. The one complaint I have is that the markers and hats don't tend to stay in place on the giant heads very well.

I was going to close this review with a pithy comparison to the Easter Islanders and the ever-increasing consumption of the American people, but we don't want this to turn into a political statement, do we? No, we don't. Because that would take all the fun out of pointing out how stupid the Easter Islanders were to destroy all their renewable resources for something lame like giant stone cripples and their headwear.

Cons:
Kind of a weird theme, and nobody dies
Rules can be damned tricky
Game can drag for people who don't completely follow what's happening

If you think you're smart enough (and don't mind a theme about making giant stone heads), you can get this game from Dogstar Games. And remember - if you want this game, and you like this site, the best way you can support Drake's Flames is to get the game right here:
http://www.dogstargames.com/product/ASMST17
Posted by Matt Drake at 11:12 PM

How long is a typical Game?

This one sounds interesting, a thinking game about idiots - I think that will work perfect for my crew.

Who wouldn't want to win the honour of "hardest working moron in the house"? Terrific review, very entertaining

I have been reading and looking for Board Game Review Giants and is amazing and disturbing how many blogs related to viagra online are in the web. But anyways, thanks for sharing your inputs, they are really interesting.
Have a nice day