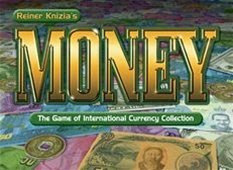 Here's the story as I imagine it:

Now, if you read my reviews often enough, you know I'm not exactly Reiner's biggest fan. You may be waiting to see me take apart Money and tell you all about how it's a lot like a used colostomy bag stuffed into a full bag of douche. But I'm not. Because while the best things in life may be free, you can give them to the birds and bees - I want Money.

Money is a combination between a bidding game and a set-collection card game. There are several different currencies, and you want to collect a whole bunch of the same kind of cash to get paid. There are bills on the table, and you can see what they are, but to bid on them you have to take some of the money from your hand and try to swap it for the cash that's already out there. You may have to pay some big bills to get the kind of cash you want, but what do you want? Money for nothing? Chicks for free?

You'll blind bid with a bunch of money cards you hope you don't need, and so will everyone else. The person who puts out the most cash will have first dibs on the cards that are out - or he can swap them for someone else's bid. Sometimes that's actually a pretty good idea. Sometimes you'll see that someone is bidding exactly the kind of currency you're trying to collect, so you'll just go on, take the money, and run.

The trick here is that if you don't have enough of one kind of currency, it's worth just about nothing, but if you can collect a bunch of it, and have some triplets, you'll really rack up your score. If you can manage to get every note of a single kind of currency, your score for that pile of cash will be huge. But you might have to give up some pretty sweet bills to make that happen. You might get what you need, but you'll work hard for the money.

This is a really fun, really fast game. Twenty minutes after you start, you'll be counting up your score, and you'll have time to try it again - and you'll be looking forward to it, because it may seem odd for me to like a Reiner game, but Money - it's a gas. I may even have to reconsider my general opinion of Reiner games. Maybe, just maybe, Money changes everything.

Pros:
Really clever and full of tough decisions
Fast and easy to learn
Really nice cards
You'll play this game for the love of Money

If you've got Money, I've got the time to play it. You can get it here:
http://www.eaglegames.net/ProductDetails.asp?ProductCode=GRY002
Posted by Matt Drake at 9:32 PM

This one sounds great, and the perfect length for me, thanks for sharing, and me I am all about the oldies - so I enjoy hearing lines that are still stuck in my head 20+ years later