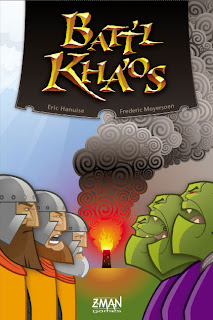 Sometimes I like to think that games are created when people are presented with interesting design challenges. Someone comes along and says, 'hey, make a game where you combine addition and mermaids, only make it boring,' and you get Atlanteon, one of my least favorite games of all time.

And if you got this design brief:

You would get Battl Khaos. I'm pretty sure the title has an apostrophe in there, but I'm already so annoyed at having to type Khaos with a 'K' that I'm not about to go including ludicrous punctuation.

In Battl Khaos, one player is the knights and the other is the orcs, and they're fighting to grab towers. Only they fight by standing around and when enough people are in one place, they count who has more warriors, and that person gets to put down a flag. This way nobody gets hurt, but they can still get all berserk and blood-thirsty and stuff, play war drums and summon monstrous helpers, and everyone is still able to go home at night and sleep in a warm bed with their cuddle bunnies.

Basically, you're putting down square tiles. Each corner of the tile has pictures of warriors on it, either orcs or knights. When all four tiles are laid down to create an intersection, you see who has more fighters at the corner, and that guy claims that spot. Claim enough spots, you can grab a tower. Grab enough towers, you win the game.

That's basically the long and short of it, though there are also special characters that can do stuff like double up your guys or block opponents or swap out the tile for one that works better for you. Basically, it's a lot like Carcassonne, except that there's fighting, only nobody ever gets much more than a splinter or a stubbed toe, and when that stubbed toe does happen, the teacher comes out and makes everyone apologize and then skip their juice breaks.

The best way to approach Battl Khaos is to ignore the theme completely. It actually works better if you're not trying to arbitrarily assign meaning to your tile placement, and just remember that you have to manipulate the map so you have more of your color where it counts. Then it becomes a very cerebral game of play and counter-play, where you end your turn with 'ha!' and end your opponent's turn with 'dammit!' I guess it's that same cerebral game if you pretend that one of you is green-skinned marauders and the other is King Arthur's leftovers, but my point is that the theme is essentially pointless.

The game itself is actually pretty fun, if you like games that involve a hell of a lot of deep, strategic thinking. Cautious placement dictated by an overall plan is what wins the game, as well as seeing moves before your opponent and maybe distracting him so you can swap out key tiles when his back is turned. It's a very analytical game, almost mathematical. Any more math, and it would be a Reiner game. And probably be boring.

Battl Khaos kind of came and went without much fanfare, and I think I can see why. If it had been sold as a two-player abstract, people might have been delighted to try it. But it has these warring factions on the cover, and looks like it's all about bloodshed, and then you're really just laying down tiles and not actually fighting at all, and the theme falls apart. So people looking for two-player abstracts never got on board, because it looks like a game about war, and fans of games about war blew it off because it's actually a two-player abstract. A classic case of misrepresentative marketing, which turned off the people who might have enjoyed it and annoyed the people who thought they were getting a game where people died.

Battl Khaos will appeal to fans of abstracts who are looking for half-hour games they can play with just two players, and who don't really care if anybody dies. I probably won't play it again, because I like games with three or four players that take two hours and have lots of bodies.

Cons:
Not sure why this needed a theme at all - would have been a great production from Blue Orange
Not really much in the way of killing

When it was a new game, Battl Khaos was sold through Z-Man. Now that it's faded rapidly into obscurity, you can find it at Game Salute:
http://gamesalute.com/games/game.php?game=239
Posted by Matt Drake at 5:38 PM

The logo looks like "Bath Khaos", but there's no tub on the cover.
Confused.

It really is a shame this game didn't get a better reception as it's an enjoyable 2-player that provides lots of creative decision-making opportunities in a small package. Plus, the short play time just lends itself to repeated plays.