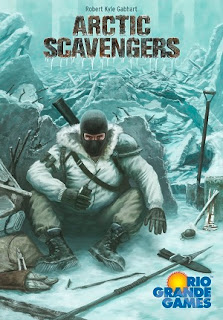 Remember right after Dominion came out, and there were no other deckbuilding games in the whole wide world, and everybody was like, 'holy cow, can you believe how cool this game is?' That was before Thunderstone and Nightfall and Rune Age and Eminent Domain and Marvel and DC and all those other deckbuilding games that came out because deckbuilding is actually a pretty awesome game mechanic. And so when Arctic Scavengers came out, and was pretty much the second deckbuilding game in the whole wide world, the comparisons to Dominion were inevitable. If you were holding the license to Dominion (the way Rio Grande was), Arctic Scavengers was the upstart game that was going to break your chokehold on the gaming market.

So Rio Grande did what any sensible big business does when threatened by a small business - they bought the competition and then sat on it. For years you couldn't find Arctic Scavengers anywhere, because Rio Grande wouldn't let it see the light of day. And in the meantime, while Rio Grande said, 'no, you will not compete with Dominion!', Thunderstone and Nightfall and Rune Age and Eminent Domain and Marvel and DC and all those other deckbuilders came out, because deckbuilding is an awesome mechanic and Rio Grande couldn't afford to buy every single one of those games just to stick them in the corner.

Finally, after years of sitting on a game that wasn't making them any money, Rio Grande decided it might be time to just print the damned thing. The deckbuilding bubble was burst. Dominion's heyday is good and gone. So with all the wind blown out of the deckbuilding sails, Rio Grande quietly slipped Arctic Scavengers out the door and into the public.

And it's still awesome! Arctic Scavengers is far more fun than Dominion, and I really like Dominion. It's got interaction and violence, a variety of strategies to win the game, tough decisions and an actual theme. This is not some ludicrous slapped-on theme that doesn't make any sense. This theme works great. In fact, the theme in Arctic Scavengers works better than the theme for just about any other deckbuilding game you could play.

The story is that a global ice age acts as an apocalyptic event, and now humankind is competing for resources in a big way. You're each a tribe of survivors trying to build a bigger tribe of survivors, and so you hire people to join your tribe, you search for tools, and you fight the other tribes for the best resources. Just about any action you could take in the game can be described in real-world terms that make sense.

For example, let's say you want to hire some people from a nearby settlement, but you also want to send out a search team for meds, and you just heard that a neighboring tribe is gearing up to go grab something big. You don't know what that big something might be, but damned if you're going to stand around and let them have it without a fight. So you go out into your tribe to see who is available, but you can only round up a scavenger, a brawler and a couple tired-ass refugees. So you throw a shovel to one refugee and tell him to head out to the ruined city and see what he can dig up, you tell the scavenger to go hunt some grub he can use to entice another scavenger into your tribe, and you tell the brawler and the refugee to go lay in wait and see what those other people are so excited about.

That sounds like a normal thing that could happen, right? I mean, assuming the world was covered in snow and people were killing each other for food. I didn't have to use game terms to describe what happens - but the game plays exactly how I described it. You pull five cards and get a scavenger, a brawler, a shovel and two refugees. You send one refugee to dig in the junkyard. You use the scavenger to hunt, which nets you another scavenger. You assign the brawler and the last refugee to fight, even though the refugee has no fight score, because he can at least break ties.

This is what I mean when I say that every game thing could be explained with a real explanation. Sure, it's got abstractions, but Arctic Scavengers doesn't just start with an idea and then make it a card game. It starts with a theme and then makes a game that fits the theme perfectly. Some games force a theme to make the deckbuilding work - I love Nightfall, but the theme is just ludicrous. For Arctic Scavengers, though, the deckbuilding is the only mechanic that would have made the theme work this well.

But let's say you already know all this, because you bought Arctic Scavengers before, when it was just one guy putting out a game. You already know how well the theme works. You know that this is as perfect a marriage between theme and mechanic as you're likely to ever see in a deckbuilder. And you don't see why you should run out and buy the same game all over again. There is, however, a damned good reason you should.

When the designer of Arctic Scavengers first came up with his idea for the game, he had an expansion in mind. It would have leaders and buildings and more tribe members to recruit, and generally make the game better. But then Rio Grande bought the game, and they bought the expansion at the same time, and it sat forgotten in a dusty corner until Rio Grande finally decided to put it on the market.

Well, when they finally decided to pull off the dusty cover and publish this sucker, they went ahead and threw the expansion in the box. The leaders and buildings and extra tribe members are all in the same package with the regular game, and now that you have everything, there's no reason to play with just the basics. The expansion stuff is so damned good that it's worth owning two copies of the game just to have this good stuff.

The leaders are your avatar in the game. They don't actually do stuff, exactly - they don't hunt or fight or look for supplies. Instead they grant some cool ability that can modify how the game works for you. The ranger teaches otherwise useless refugees to hunt, so that they will be good for something. The cannibal makes those useless refugees into something useful, but rather than sending them to hunt, he just cooks them into burgers.

The buildings are a little limited - I would have loved more - but the ones you get can do a lot of cool things. Mostly they store stuff for later turns, and I have achieved some exceptional mileage out of the pharmacy, especially when my deck had too many medkits because I was trying to entice the pharmers gang to join my group.

Playing Arctic Scavengers the way it used to be, before this box came out, was very fun. Better than Dominion, if a little less replay-friendly. But with the expansion material you get with the new reprint, Arctic Scavengers is a really awesome game. I wouldn't consider playing it without the leaders and gangs and buildings. It's thematically perfect, easy to learn, and incredibly difficult to play exactly right every time. I can't encourage you enough to pick up a copy of the new version. It's better than Thunderstone and Nightfall and Rune Age and Eminent Domain and Marvel and DC and all those other deckbuilding games that came out because deckbuilding is actually a pretty awesome game mechanic.

Cons:
I like the art better in the old one (except for the Field Crew)
Not as much replay value as you might see in other deckbuilders

I am amazed at how good the prices are at Coolstuff. At this price, there is no good reason not to own a copy of Arctic Scavengers.
http://www.coolstuffinc.com/p/165504
Posted by Matt Drake at 12:15 PM

Thx for the tip - I'll definitely have to check this game out. Cuz, uh, deck-building is, like, a really cool game mechanic.

Any thoughts on Android: Netrunner? It's currently the favorite game of me and my SO, the theme is neat, the (deck-building) mechanics are great and the bluffing (which really is what the game is all about) is a game-flavor not too oftened tasted.

I would love to take a look at Netrunner, but there's one really big thing stopping me - it's FFG. And they don't send me things. Not after the Mutant Chronicles/penis fiasco. Any FFG games I review any more, I have to just up and buy them, and this one is way down my list.

Thanks for the history lesson about why this game was shelved. I always wondered why I heard good things about this game when it first came out and then never heard about it again until recently. That makes a lot of sense.

They sent me this to review as well. I am just now getting to learn it and will do some play testing tomorrow. Glad to see you like it. I hope I do as well. It looks promising.