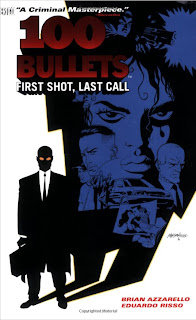 I just finished an amazing comic book series. And when I say, 'just finished,' I mean 'half an hour ago.' I've been plowing through it for two months, and finally read the grand finale. And oh, man, was it grand.

The book is called 100 Bullets. Like many of the comics I prefer to read, it's done. The story has been told, and tied off with a bow. In this particular case, the bow is stained with blood, soaked in gasoline, and burned around the edges. This grisly bow wrapped the title three years ago, which meant that I was able to read every issue, in order, in the course of two months. Not bad for a book that ran for ten years.

If you read any of the blurbs about 100 Bullets, they will tell you that it's a story where an old dude gives somebody a briefcase with a gun, 100 bullets and irrefutable proof of the person who wronged them. Oh, and carte blanche. They can kill people like it was free.

So this would seem to be a revenge fantasy comic book, but it's not. There's this facade, this fake front of a story that seems to ask you if you would kill someone if you knew you could get away with it. But it's much more than that. It's an enormous tale spun over 100 issues of grime and grit and wholesale murder. It's a tale of conspiracy and crime, villainy and treachery, with a distinct lack of heroics.

Although if we're being completely fair, the bigger story delivered in 100 Bullets also presents the same sort of moral dilemma as the simple attache case with the gun inside. Because the true masterminds of this international conspiracy act with no sense of remorse or repercussion, the story takes on a sort of double image - you've got Joe Street, getting away with murder, and then you've got the people that gave Joe the gun, and they're acting with just as much impunity.

But, the story goes on to ask, is any act as powerful as murder ever without consequence? Just because you don't wind up in prison, does not mean you got away with it. The measure of your crime might be a cascade of violence, where you become a target because you killed your target, or it might just be having to live with the knowledge that what you did is both irreversible and horribly wrong.

OK, that's enough about the philosophy of 100 Bullets. If it was just a head-twist comic, it wouldn't need to have ten years to tell the story. It could sum it up in one issue. For a comic this good to last this long, it has to have something more - and this one does. Great characters, killer fight scenes, intricate plots, and loads of sexy broads make 100 Bullets one hell of a great crime story.

The characters, in particular, bring this book to life. From the Hispanic ghetto girl who finds out she knows hapkido to the conscienceless Hawaiian killing machine with a perpetual mad-on for the entire world, the people in 100 Bullets are more than just plot devices. You can be just as entertained watching Curtis Hughes reconnect with his long-lost son as you are when Cole Burns shoots up a warehouse full of Russian mobsters. There's plenty of action in 100 Bullets, but the best parts happen when the characters, and not the bullets, take the main stage.

This being a Vertigo comic should be enough of a warning up front, but let me emphasize in case it wasn't clear - this is NOT a comic book for the kids. There are boobs. There are cuss words. There are beheadings and fiery death and people getting their hands blown off. And those aren't even the worst of it. Seriously, do not go into this book with a weak stomach. 100 Bullets throws punches that make Tarantino look like Walt Disney.

Now, you could probably do like I did, and get all 100 issues on Comixology, but in this case, I would recommend checking out the trades. There are 13 of them, and when you read the book, you'll understand why that's a lucky number. If you can get 'em for 15 bucks each, they'll still cost you less than buying them off Comixology. And as an added bonus, when you're done, you can loan them to a friend. Good luck doing that with a digital comic.

This link will send you to Amazon, where you can pick up this fantastic book pretty darn cheap, especially compared to what I paid for it: