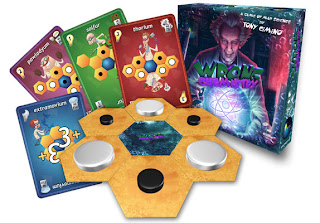 There's this wacky little game company in Greece or Istanbul or Constantinople called MAGE Company. They make, well, games, including a Kickstarter they have going for 12 Realms, which I guess is kind of a big deal. And they sent one to me called Wrong Chemistry, though they apparently tied it to the back of a mule which they then guided by remote-control carrot all the way to Texas, because it took months to arrive.

When it did finally show up, the anticipation was killing me. I couldn't wait to play, because I had waited for almost half a year to see this little slice of genius. I'm happy to report that it's not as bad as you might assume a game would be if it came out of Bulgaria. And really, it's not fair to assume that Bulgaria would produce bad games. They have smart people there. They have modern technology like cell phones and remote-control carrots. Why would you just decide Bulgaria makes inadequate games? I'm ashamed of you.

The game itself is astonishingly light, but will still stretch your brain into salt-water taffy. The rules are two pages. And really small. There's this collection of hexes in the middle of the table, and you play a card and try to rearrange the hexes in a limited number of moves to match the image on your card. It's like an IQ test for game nerds. (You remember those grade-school IQ tests, where they made you rearrange blocks to look like stuff? I loved those. But I didn't want to make cats and question marks, I wanted to make robots and dragons. Sue me. I was eight.)

Anyway, the more complicated the card you attempt, the more points you get for it. And since you know what the board looks like at the start of your turn, you can figure out pretty quick if it's possible to create the shape you want. Only the board totally changes every turn, so you can't start planning your turn until your turn actually starts, which means you'll spend two minutes looking at your cards and mentally moving stuff around while your opponents wonder if you've been assimilated by the Borg Collective and your brain has shut down. They can't bitch too much, though, because they do the same thing on their turns.

The fact that the board changes every turn means you can't plan ahead, and honestly, that's the biggest problem I have with the game. You build what you can, expand your spacial recognition skills, maybe put together some clever plays with some of the special cards, and then your turn is over and you can rest your throbbing brain while the other players mess up any chance you might have of building a long-term strategy. Wrong Chemistry poses a fun mental challenge, but my favorite games let me plan for the long game. There is no long game in Wrong Chemistry. You play your hand and you move on.

However, just because the game is essentially new every turn does not mean it isn't a hoot. We played it a bunch of times, and that should be significant if you understand that I only needed to play it once to review it. So we played it once because we had to, and then several more times because it was fun. Planning? No. Fun? You bet.

Of course, I liked those grade-school IQ tests. I also like playing with Legos. I like rearranging things to make other things, and this game directly appeals to the parts of my brain that like building robots when I should be putting together one-way arrows. Wrong Chemistry is one part game, two parts puzzle. If you're hoping for interaction, forget it. If you want to build strategies, you're looking at the wrong game. But if you like brain puzzles and competitive spatial arrangement, Wrong Chemistry is pretty fun.

Cons:
No chance of long-term strategy
The parts won't let you build a dragon with a robot penis. But then, neither did those grade-school IQ tests.

Want more info about Wrong Chemistry? You can get it right here:
http://www.magecompany.com/wc.html
Posted by Matt Drake at 10:23 AM