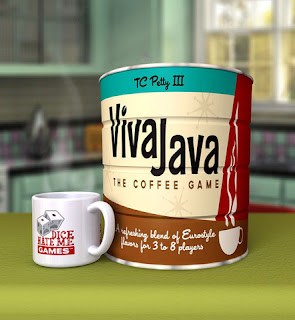 If we were to start listing themes that make me want to play a game, brewing coffee would not be anywhere near the top of the list. It's safe to assume it would be near the bottom. However, for someone, this is a gaming dream come true, so they made it a game and even went so far as to publish it.

Coffee might be the theme of Viva Java, but rationed cooperation is the name of the game. Every turn you'll have to work with one or two other players to decide whether you want to try to score or improve your position, and you can't succeed at anything by yourself (well, theoretically you can, but you probably won't). You'll have to work with the other players if you want to get ahead - but you'll have to be careful about who you help, and when. It's great to get in on that top-selling brew, but if you're scoring points for the guy who is winning the game, it hurts you more than it helps.

One huge upside is that for a game about brewing coffee, Viva Java has a ton of interaction. Like I said, you can't play without working with other people, so unlike nearly every other game where you actually do something to the other people at the table, most of the interaction in Viva Java is nice. Help this guy research coffee growing, and you can earn the right to invest in the brew he makes later. Help the other guy whip up a mad batch of caffeine glory, and the two of you make millions together. Then help the third guy to get the beans he needs to make an even better brew, and you'll win by being the smartest at being nicest.

I don't usually spend a long time talking about the pieces in games, beyond mentioning whether they look good or not. However, Viva Java bears some discussion, because while the graphic design and art are outstanding, there are a lot of things not to like. My main beef is with these (insert favorite profanity) coffee beans. They are tiny, like a quarter-inch across, and they are half-spheres. Which means flip them one way, and they don't stay where you want them, flip them the other way and you can't pick them up. Trying to make these fantastically irritating little half-beads stay put is so difficult that it actually makes it less fun to play the game. I can think of half a dozen better ideas I've seen for markers. These things are infuriating.

And to make matters worse, you have to continually place these miniaturized frustrators on cards - which you then pick up and move all over the place, thereby spilling the 'beans' all over the table and then forgetting where they were supposed to go. The actual physical mechanic of manipulating these cards and beans is like a dexterity game all by itself, but one that if you screw it up, everyone at the table just gets mad at you.

If Viva Java were better, I would be willing to give the horrible little wood irritants a pass, but the game is only above average. One a scale of 19 to 203, Viva Java is better than mediocre and not as impressive as awesome. Granted, I would have liked it better if I could have killed something, but I really did like that a game that makes you play this smart also makes you play nice. Most games that require interaction force you to hurt your opponents; Viva Java rewards you for giving them a leg up. For people who hate to screw your friends (we call these people 'pansies,' but we like them anyway), Viva Java is a cool drink of water.

Pros:
How many games play 8 players? Yeah, not that many.
Actually a pretty clever game
Almost all the interaction is in the form of helping people
Engaging and attractive graphics

Cons:
Making coffee is a morning chore, not an idea for gaming
OH HOLY GOD THESE STUPID COFFEE BEANS!!!

You can only get Viva Java from Game Salute, but if you have enough people to play it, and you like to help more than you like to hurt, you can get it right here (ignore the 'preorder' tag - it's out now):
http://shop.gamesalute.com/products/viva-java-preorder
Posted by Matt Drake at 6:37 PM