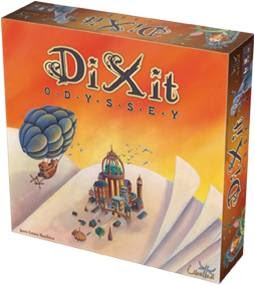 It's tough to categorize Dixit Odyssey as a particular kind of game. There's a little scoring board in the middle of the table, but that's about as much board as you get. There are cards, and they're pretty important to the game, but the game isn't about the cards, it's about the ideas they represent. Maybe instead of 'Weird Game Review', I should call this one 'Stoner Game Review.'

But that's pretty limiting, too, because Dixit Odyssey is absolutely not just for people who are under the influence of mind-altering substances. It's great for little kids with too much energy or old men who fart in their sleep. It's perfect for bored housewives banging their pool boys or college kids tanked on Jello shooters and Goldschläger. And none of those people needs to know the first thing about rolling dice or claiming trumps or resource management or anything else. They just have to be able to use their imaginations.

In all honesty, Dixit Odyssey is not really an entirely original game. I mean, the game is fantastically original, but this is the third release. The first one is just called Dixit. It won some huge gaming award last year in Germany, so you know it must be great. You can trust the Germans.

The idea behind Dixit (and by extension, Dixit Odyssey) is that everybody has a bunch of cards with crazy pictures on them, like wolf puppeteers with sheep puppets or metal birds hatching clockwork eggs. One person picks one of his cards and says something random, like 'Envy' or 'Curtain call' or 'Does this smell off to you?' Then everyone else picks one of their cards that looks like it might match what the first guy said, and then everybody has to try to pick the one that the first guy selected.

It's not as easy as it sounds, either, because these pictures are straight-up twisted. But good twisted. They look like they were pulled right out of the dreams of young children. They're very surreal and delightfully bizarre, and in many cases, you could say almost anything and it would fit.

Dixit Odyssey uses the same rules as the original, but this time they spent a little more time thinking about how you play this game with a dozen people. The board has places where you put the cards so that you can easily assign numbers, and everybody has little scoring tablets with holes in them where you can vote with your plastic doodads. It's considerably more efficient than the original, though for my money, it's not as charming. The original had little bunny rabbits moving around a track. This one has a linear scoring track (but still bunnies, so that's something).

Unfortunately, the voting boards don't work as well as they should. There are pegs to stick through the holes and indicate your vote, but if you put your board flat on the table when you vote, your peg will fall out because the boards aren't deep enough. But if you want to play Dixit with twelve people, just hold the damned board in your hand and quit your complaining. It's still an enchantingly original and delightfully fun game.

In all honesty, it's very difficult to explain Dixit in any form well enough that you know how to play. This is a very visual game, and one that you have to see to understand. Trippy, surreal art and a pretty basic guessing game might sound like something only young children would enjoy, but it's actually incredibly engaging and a hell of a lot of fun. I don't often just resort to 'trust me' as a reason to play a game, but with Dixit, it's so unlike anything else that until you give it a try, you just won't get it.

I can't think of anybody who wouldn't like Dixit. I mean, I am certain there are people who hate it, but I can't describe the kind of gamer who would avoid this one. If you like games about farming and family planning, there's no reason you can't also enjoy Dixit. If you're a fan of war and bloodshed, so what, you can still get a kick out of Dixit. You can enjoy it if you like short games, and you can have fun if you only like long games. It's not like other games, so there's no one group of players who will just hate it. I love it, and look for excuses to play it.

Give Dixit it a shot. Trippy or not, it's a heck of a lot of fun.

Pros:
Imaginative and engaging
Beautiful and surreal
Now play it with up to twelve
Even if you already have the original, there are a bunch of new pictures to play with

Cons:
Less flat-out charming than the first one (but only by a little bit)

I held this review for a week, hoping this game would be out by now, but it appears you'll have to wait a little while to pick up Dixit Odyssey. It should be out pretty soon.
Posted by Matt Drake at 2:01 PM

My envy that you own this is palpable. Such a great game and it appears to be a worthy successor. I also heard that it's insert is capable of holding the 1st and 2nd iterations in the game nice and tidy.

Yes, and I can't believe I didn't mention that. You can store everything published so far in the one box.

Nice review, am too envious that you have a copy... am waiting patiently for my copy to arrive...

So, I do not really consider it may have success.
site