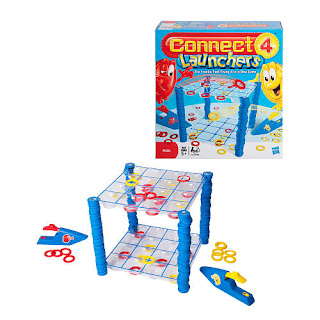 I like games designed for kids. There is often a simple and grin-inducing pleasure in playing a game meant to entertain people who eat paste in art class. Not only that, but when I was a kid, Connect 4 was one of my favorites. It was smart without being complicated, yet simple without being condescending. It helped that I won a lot.

This year, Hasbro is breaking out a new version of Connect 4. This one doesn't have the old vertical board where you drop checkers down from above. In this version, you shoot your checkers like a carnival game, only if you win, you don't get the giant stuffed panda. There are a bunch of checker-sized buckets, and your goal is to shoot your checkers into the buckets with plastic launchers. It's a little like tic-tac-toe, but you can put out somebody's eye. So I'm in.

Of course, as soon as I got Connect 4 Launchers (they went with an obvious name, so as not to confuse children who still can't spell their own names), I took it out and spent an hour honing my checker-launching skills. I had pets to feed, dinner to cook, laundry to wash and paying work to do, but I still blew an hour of my night firing checkers into plastic buckets. I almost said I wasted that time, but that would be wrong. I loved every minute of it.

It gets even better if you're playing against someone else, because then it's a frantic free-for-all. You need to keep your nerves calm, or you'll fall prey to the panic that builds up when your opponent is landing shot after shot and all of yours keep zooming off the table. You need to steady yourself, take careful aim, and shoot your opponent in the nose. See how good his aim is when he's snorting a plastic checker!

If you can't stand the pressure of constantly firing plastic discs into the air as fast as you can while your eight-year-old laughs at your completely lack of coordination and self-control, you can always try out the advanced rules. In these only-slightly-more-intelligent rules, you take turns shooting your plastic hoops. That alone is not inherently more clever, because all it means is that you've slowed down the game (which is a good idea if your advanced years have given your children an unfair edge).

What makes the advanced rules a little more clever is that some of the checkers now have special powers. If you use a special power checker, you might be able to take another turn, or clear out a big piece of the board, or take your opponent's checkers out of their buckets and stymie his four-in-a-row. This is also nice to do if your children are talking too much smack, which they probably are if they are anything like my kids.

Any way you play it, Connect 4 Launchers is a fun little game. It's not a cerebral thinking-man's exercise, and you won't be managing any resources or employing the cunning tactics that you have to use every day so your children keep thinking you're smarter than they are (this will become essential when they become teenagers, as they will undoubtedly assume they are smarter than you are until you beat them mercilessly in a battle of wits). It is, however, a riotous, action-packed good time that will have you laughing and firing plastic doodads as fast as you can reload and aim. Blind-firing won't do you any good, so you'll have to have some wits about you, but it's still a great excuse to let your mind regress to when you thought it was still a good idea to make fake pies out of schoolyard mud.

2 players, or 4 if you decide to play in teams

Pros:
Dexterity games are supposed to be this much fun
Easy to set up, easy to store, easy to play
Your kids will play with this for at least 15 minutes, which is three times as long as you got out of the last GI Joe action figure you bought

Cons:
Good luck finding all those checkers after your spasmodic pre-teen shoots them all over the kitchen

It should probably be pretty obvious that Noble Knight Games isn't carrying this game. But you can get it from Toys-R-Us real cheap:
http://www.toysrus.com/product/index.jsp?productId=11825651
Posted by Matt Drake at 8:46 PM

LOL, you scooped me! I was going to review this as well this week.

Honestly, you're spot on. My 10 year old LOVES this game, and kicks my ass on the regular.