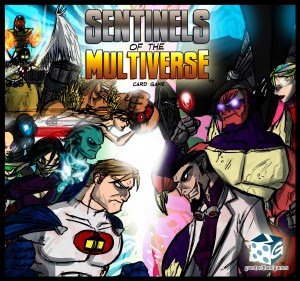 Theme-lovin' gamers have it pretty good. Think of a cool theme, and you can probably find a game that does it well. If you want world war, we've got it (frequently with robots or aliens). Zombies? We've got it. Swords and sorcery? Holy crap, have we got it.

But what seems to be missing - and what should be a pretty obvious hole in gaming history - is a good game about comic book heroes. That's not to say that nobody has tried, but no game I've played is able to really bring to life the feel of comic book supers throwing each other through windows, pounding each other with heavy machinery, or blasting away with laser eyes or bursts of arcane power. Sure, the games are there, and some are even fun, but so far, none really brings home the battle for the future of planet Earth against a mad genius with unparalleled power.

But now, thanks to one tiny game company with a whole lot of balls, we can finally blast the evil right into space. Sentinels of the Multiverse might be a low-budget production, but what it lacks in plastic widgets and cardboard mats, it makes up in pure story-inspired enthusiasm. The game pits a team of players against a seriously dangerous villain in all manner of crazy comic-book locales, like moon bases and lost worlds full of dinosaurs. It's cooperative, so it has lots of hurdles to overcome, but it manages to deliver an exciting story full of smackdowns and last-minute saves.

Everything in Sentinels of the Multiverse is done with cards. The box comes with hundreds of 'em, so the first thing you'll want to do when you open the game is put the various decks into some sort of storage, like tuckboxes or card dividers or sandwich baggies tied up like heroin balloons. If you don't organize the cards, they'll slide around in the box, and every time you play you'll have to separate all the decks again. And since there are more than twenty different decks in here, you could be at it for a while.

Each hero is represented by a deck of cards, as is the villain. What's especially interesting is that your combat zone is also a deck of cards, and every turn, you'll run afoul of crumbling ancient traps (if you're battling in Atlantis) or dinosaurs (if you're fighting in the lost world) or bikini slippage (if you're wrestling in a kiddie pool full of olive oil and grape Jello).

Play is pretty easy, though there are lots of elements to track. The bad guy goes first, summoning minions or deploying weapons or whatever other nefarious badness is on the card he plays. Then the heroes each get a turn, and they can play their cards to blast the hero with ice rays or encourage their comrades to fight harder or rest up and try to recover from the recent ass-whipping the villain has handed out.

The final round, and the thing that grounds the battle and makes it feel like you're somewhere doing something instead of battling in some nebulous gray zone, is when the environment plays. The villain may have his base on Mars, but that doesn't mean Mars works for him. The self-destruct sequence might begin counting down, and even Baron Blade will be in trouble if the whole place blows up. Or the red dust could get into everything and gum up the works in your gyro-salad shooter. Or the Baron might reprogram his Rhoomba to shoot anything it bumps into, which seems like a good idea until he blows up his sofa and puts a hole right through his big-screen TV.

Now, everybody knows that no comic book villain is ever defeated after just one beatdown, and when a really tough bad guy takes a serious beating, he's going to have to step up his game. He'll jump into his power armor or transform into his more deadly form or put on some inspirational 80s music and strap a headband around his forehead, and then come out to kick some serious hero ass. This is simulated by a ridiculously easy mechanic - after the first beating, you flip over the villain's card.

Sentinels of the Multiverse enthusiastically embraces its comic book roots by giving you ten different heroes, four different villains and four places to duke it out, but it also embraces its small press origins by having a lot of things that will bother you. That's how you know it's small press, because a big company would have spent the extra money to fix those problems. For instance, you have to track hits for your heroes and villains and minions and mobile weapons platforms and attacking velociraptors, and the game recommends you keep pen and paper handy. So do I, because you're going to be doing a lot of adding and subtracting and it's going to get impossible to remember how everyone is feeling. A board with numerical tracks for heroes and villains would have been super nice, though you can use dice for evil robots, because they're usually really easy to knock down.

Another problem is how many things there are to remember. You'll want a conductor to run the game for you, so that he can run down every step and make sure you don't forget to advance the clock on the self-destruct sequence, or give Ra his damage for overloading his fire-blasting skills, or get distracted by Wonder Woman if she forgets that her plane is invisible when she's changing her super bra. You'll have to count the cards in Baron Blade's discard pile and keep track of how many environment cards are all acting at the same time. Basically, there's a lot to follow, and it can get confusing.

The most exciting part of the game, whacking things, is sadly also encumbered by the need to remember every modifier to your punch. Imagine this exchange:

"Evil Overlord, I will hit you with my power fist! It will do six points of damage!
"But Bunker, I am wearing a personal force field, so you only do four points!"
"Aha, Overlord, you forgot that I have had Legacy telling me how good I look in cotton trousers, and so my added self-esteem does you one extra!"
"Blast, Bunker, I forgot about Legacy's motivational tapes!"
"So did I, until just now! I can't figure out why I keep ending every sentence with an exclamation point!"
"Because it's a comic book, you self-righteous asshat!"

I won't pretend that the foibles present in Sentinels of the Multiverse did not bother us as we played, but I can tell you that we unequivocally had a very good time in spite of them. I stole some dice out of some very bad games to track hits for minions, kept the rulebook handy to remember the turn order, and frequently wound time backward to remember to fix whatever I had forgotten before. We got past it, and enjoyed the romping story of a team of super-powered warriors throwing a beating on evil and saving the world.

It's not a slick game, by any measure that matters, but Sentinels of the Multiverse is very entertaining. The art is very cool, with a style that resembles modern superhero cartoons and some engaging graphic design. For instance, each hero gets a card for his hero that tells him how many hits he has and what powers he can wield every turn, and these cards look like comic book covers, including having the hits look like the issue number. It's clever and fun and cooperatively entertaining, and more than any other superhero game I've played, actually feels like a comic book battle. There's a lot to be said for a game that brings home the bacon when it comes to the theme, and if you've been looking for a good supers game, you could do a hell of a lot worse than Sentinels of the Multiverse.

Pros:
Story plays out naturally, doesn't feel forced, and is a blast to experience
Easy to play, without too many complicated rules
Great art really enhances the theme
Delivers the feel of a comic book battle extraordinaire
With a wide selection of heroes, villains and environments, provides tons of replayability

Cons:
Lots of irritating little things to remember
Hit tracking feels sloppy
Overall lack of polish
Doesn't scale - 2 players will get their asses kicked, 5 will clean up before lunch is ready

Sentinels of the Multiverse goes for forty clams at the publisher's site, which might seem steep until you see the hundreds of cards in the box. You can pick up a copy here, and start kicking some villain ass:
http://www.sentinelsofthemultiverse.com/store
Posted by Matt Drake at 2:27 PM