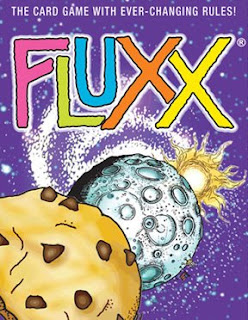 I swear the people at Looney Labs are high. I mean, more power to 'em - they own the company, so they're guaranteed not to get tested at work. But man, they make some odd games.

Take Fluxx. This is a game where you basically don't need to know the rules before you sit down, because the rules change all the time (thus the name). Ostensibly, the goal of the game is to have the right combination of Keeper cards in front of you when the goal of the game becomes having that combination of Keeper cards, but even that rule isn't set in stone, and that's barely a rule anyway. I would have to be sleeping off a tray of brownies the size of Jersey to come up with that rule.

There are basically four kinds of cards in Fluxx. Rules cards change the game, so that on your turn, you might have to draw one card and play three, and then the next guy might have to draw four cards and discard down to one. There's also a card where you have to have a baked potato to win. No, I did not make that up, but it may have been made up by someone who was moderately inebriated.

Then you've got Action cards. These cards just do zany crap. You might dump some cards, or steal from other people, or draw more cards, or pass cards around the table. You might trade hands, or throw away bad cards, or otherwise screw up everything. There's not a lot of rhyme or reason to these cards - they just let you do something. Probably something weird.

The Goal cards change the winning conditions. Usually, the goal is to have two particular Keepers, like cookies and milk or toaster and bread or melted chocolate. That's a lot of snack food - which may or may not be the result of the game designers having a sudden compulsion to eat. But combinations aren't the only goals - there are goals where you have to have ten cards, or five Keepers. There's also the peace and love goal. Tell me these people aren't stoned.

Then you've got Keepers and Creepers. These are cards that you want to have, usually, except for Creepers, which you have to play and which keep you from winning, unless they don't. Like if winning the game requires you to have war and death, then those two particular Creepers might be great. And some rules make it so that Creepers are OK. The Keepers are stuff like cookies, spaceships, eyes and appliances. Creepers are stuff like death and radioactive potatoes.

Basically, this weird game has you going around the table, constantly modifying the winning conditions and rules for the game until someone sort of stumbles into a win. You pull a couple cards and go, 'hey, if I play all these, I win! Cool!' And then you hope someone doesn't change the rules before your turn.

I have to admit that I liked Fluxx. It's not a game that I would play when I want a deep intellectual challenge, and it seems to have all the strategic depth of 52 Pick Up, but it's still fun. It's virtually pointless, not particularly deep, but somehow still wacky, meaningless entertainment.

Hmmm. What else can I think of that is wacky, meaningless, and fun?

Pros:
Fun and seriously easy to learn
Crazy card play can go all night or end in five minutes
Small and cheap

Cons:
Not much depth
Kind of pointless

You can get Fluxx at the Looney Labs webstore:
http://store.looneylabs.com/Fluxx
Posted by Matt Drake at 7:02 PM

After a ton of hands you start to see ways to pull off fun combos like getting out a bunch of cards that let you do a massive amount of stuff right before you play "Rules Reset" at the end of your turn. In the end, I always tell people to forget about trying to win, just play to screw with the other players as much as you possibly can.

Perfect example of a game where it all comes down to the crowd you're playing with. The proper attitude in my book is to be serious about not taking it seriously. Find ways to amuse yourself and mess with your friends, but do it with gusto! I for instance will avoid winning games at all costs, or if someone must win on my turn, go out with a nice fireworks show.

(Also, I find it helpful to not pull your "Let's see how many dozen cards I can draw and play this turn!" trick when there are total newbies present, if you want them to stick around.)

remember how to play it grom the liitle times. still like it, cause it's GREAT!! really a game for all time!