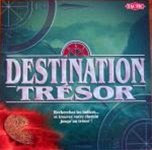 I've been known to review some pretty obscure games. Often they're the only game a small-press company will ever make, but sometimes they're just games people haven't heard of before. But this right here is the first time I've reviewed a game so obscure that it's not even in English.

Yeah, that's right. Destination Tresor is entirely in French. There's not a lick of English anywhere (except for the words that are the same in both languages, like 'destination'). I didn't know that until it arrived at my house. Then I said, 'how the hell am I going to review a game that's in French?!' Luckily, a member of BGG (who may also be nominated for sainthood) had translated the rules and posted them there, so I was able to play the game.

And wow! I gotta play more foreign games! This game is cool!

Here's the idea. You and one other player (yes, it's only for two players) are treasure hunters. You parachute down onto an island covered with jungles and swamps and stuff and start exploring. There are old forts where you can search for clues, and once you have enough clues, you can run off to the treasure site and dig it up. Last one to the treasure is a rotten egg fart.

Only the trick is that, while you have a map, you don't know where you are when you land. So instead of tracking your progress on your own map, you tell your opponent where you want to go, and she tells you what kind of terrain you hit. You map your progress and compare it to your map, to try to figure out where you landed.

(Note the use of the female pronoun above. I usually default to the grammatically correct 'he', but in this particular case, I only played the game with my wife. And since I live in Texas, where we're more likely to legalize public castration than gay marriage, you know that my wife has to be female. Thus the female pronoun. You may feel free to play with a dude, if you want.)

And while you're moving around this island, you're tramping through the jungle, or over mountains, or across wind-swept plains - and stuff happens. You might fall in a ravine, or get stuck in a rainstorm, or get attacked by angry penguins (that's the scariest one. Penguins are mean little bastards. They're probably angry about not being able to fly and always getting eaten by killer whales).

The exact nature of the hazards are not actually defined (so I totally made up the penguins), just what happens. And what happens is that you either lose time or you get lost. Getting lost totally sucks, because your opponent moves you to a new place, and once again, you're not sure where you are, and have to explore your way out.

There are some really neat things working in Destination Tresor. First there's the dual map thing - the maps are identical, and you can write on them with a dry-erase marker to track your opponent's progress. Then you've got the thing where you're wandering through the jungle, which is accomplished with a sheet of plastic that you mark up (with that same marker) to figure out where you are.

The clue thing works really well, too. Each clue gives you a hint as to the terrain around the treasure, so you need at least two or three. And while you're finding your clues (and hopefully not spending your next four turns rummaging through your backpack for binoculars or a flashlight), your opponent is doing the same thing. Your clues will both point to the same spot, but you might have two different sets of clues - he knows the treasure is on the coast and by some mountains, and you know it's in a sheltered cove, but neither of you has enough to figure out exactly where it's at.

With all the exploring and using equipment and looking for clues in a race with a rival treasure hunter, Destination Tresor feels a lot like an Indiana Jones movie (but there are no terrifying religious artifacts, and you don't wait thirty years and then make a sequel with stupid aliens and the world's most annoying child actor for a sidekick). You have to fill in the gaps a little - when the tile you pull says, 'you lose a turn if you don't have rope', you can either decide that you were A) confronted with a chasm that you had to go around, or B) captured by evil yetis who made you watch National Treasure, and that made you so dumb that you had to spend twelve hours recovering.

But then there are problems. The biggest problem is in the execution of the theme. If you were really in a treasure-hunting movie, you would be sabotaging your opponent, fighting with his henchmen, and having hair-raising adventures in far-away lands. Instead you kind of feel like a couple of bored housewives with GPS on your iPhones. It's just not all that thrilling.

Another problem is how incredibly fiddly the game is. Now, I dislike the word 'fiddly' when used in relation to board games almost as much as I dislike the word 'elegant' to describe a Reiner Knizia game, but here, it really fits. The dry-erase pens don't write very well, and you might end up making marks you can't read. Or you might make the marks just fine, but forget how many times you've said 'northeast' and been told 'jungle.' It only takes a tiny mistake to completely throw the entire game down the crapper - if you miscount and tell your opponent he's in the swamp when he's really in the jungle, he doesn't have a way to check until he spends five minutes trying to make his plastic screen line up with his map. It's way too easy to screw up and throw the whole game into absolute, irredeemable chaos.

The good news is that the exploration part of the game (even with the tendency to forget where you are) is really fun, and redeems the game of the most glaring issues. And for the geocaching suburbanite issue, I've come up with my own solution - I'm making a supplement.

That's right, I liked the game so much that I'm taking the time to fix it. I'm going to make a deck of cards that lets you sabotage clues before your opponent can read them, or hire native guides to help you get through the terrain faster. I have a bunch of ideas for cards that you could play to screw with your opponent and get you ahead. And it's pretty impressive when I like a game enough to go to this much trouble. Usually when I find a game that needs help, I go, 'guess I won't play that again.'

So if you're not above using a downloaded translation for the rules, and you don't mind sorting clumsy cardboard tiles every time you play, you might really like Destination Tresor. It's an incredibly original game, and the game mechanic of mapping your opponent's location is unique and lots of fun. With a little tweaking and a lot of imagination, you could jump right out of your living room and into an old Errol Flynn movie.

Pros:
Awesome components (except for the dry-erase pens, which suck)
Unique and innovative
You're about half a step away from feeling like you're telling a story

Cons:
Weird component choice substitutes tiles for cards
Only in French
If you are telling a story, it might be a lame reality TV show

It's funny how many places carry a game that's only in French. The price is pretty good here:
http://www.eaglegames.net/ProductDetails.asp?ProductCode=DT001
Posted by Matt Drake at 8:43 PM

Wow, that sounds really cool. Very different from any game I have heard of before. I might have to give this a try. The whole battleship style Map thing sounds pretty neat.

When you finish your "expansion" you should post it somewhere. I would love to look at it.

I recently came across your blog and have been reading along. I thought I would leave my first comment. I don't know what to say except that I have enjoyed reading. Nice blog. I will keep visiting this blog very often.

Well, I do not actually imagine it may work.
site