Board Game Review - Cleopatra and the Society of Architects 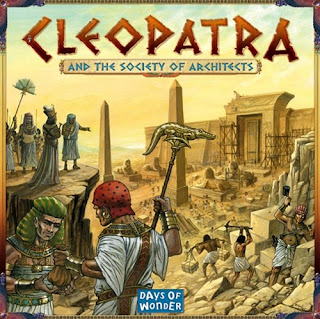 If you look through some of the catalogs you get when you buy a Days of Wonder game, they explain their name. Basically, they like to make games that remind you of being a kid and getting a new toy, and opening the box to find all this cool stuff like light-up gizmos and sound-makers that will annoy your parents for a full thirty minutes before the batteries fail, at which point you'll go back and play with the box. And none of their games has the 'holy crap, look at all this cool stuff' factor like Cleopatra and the Society of Architects.

This game is all about building Cleopatra's palace, and to really bring the theme home to roost, the box include a little miniature palace that you build one piece at a time. There's a garden, and big obelisks, and sphinxes and walls and doors and crap. There's even a little mosaic that you set up like you were playing Tetris. If you stopped looking at the parts when you saw the storage tray full of building pieces, you would still be amazed at the box full of toys.

But you would be missing even more cool stuff. There are statues of Anubis that you erect in the garden. There are cards with pictures of workers, and marble, and half-naked hookers. There are tiles for money, and tiles for worshiping crocodile gods, and tiles for Nile merchants. There's an absolutely incredible amount of stuff in the box, and yeah, it's a lot like breaking out that toy on Christmas morning and gasping with the delight that a child has when he finds out Santa brought him the latest disposable piece of crap with a movie license.

Unlike that crappy Christmas toy that is going to last for as long as it takes your child to have friends over, Cleopatra is very likely to keep you happy for a while. You take turns either gathering resources or spending them to build, and the actual actions are really easy to pick up, but really tricky to get right.

Part of the problem is that you're in a race to get the palace built, so you might have to cut some corners. And the most efficient way to cut corners is to hire shady help - but these shifty bastards don't want to be paid in cash. These dark assistants want to be paid in offerings to their dark god, and that's not healthy for anyone. Every time you cheat to get ahead, you take a corruption token and hide it in your little cardboard pyramid, so that nobody knows how many you have. You could play it straight, only building when you have the clean resources to maintain your integrity, but meanwhile all the other players are doing backroom deals and black-market pay-offs to get a cut rate on stone, and they end up building the whole palace while you sit back and try to look holy.

But there's a price to be paid for cheating, and it is a lot worse than when you copied half a term paper out of a newspaper article and wound up having to take the class again. No, this time, the player who is the most corrupt gets fed to a crocodile. This is old-school discipline - cheat the most, and wind up feeding the lizard (as opposed to draining the lizard, which has absolutely nothing to do with this game, unless you drink a lot while you play).

This awesome mechanic ends up almost creating a second game within Cleopatra and the Society of Architects, one I like to call, 'Outrunning the Bear.' See, there's an old joke that says you don't have to outrun the bear. You just have to outrun your friends. And since Cleopatra only kills off one architect, you just have to make sure you're not last. Other than that, all bets are off - but be careful, because that tricky bastard who is making all those underhanded moves might have an ace up his sleeve, and he might just have a last-minute come-to-Jesus and leave you holding all the ugly points. Then you're off to be croc bait.

There's really no tactical component to Cleopatra and the Society of Architects, but that's fine with me. There's a great strategic component where you'll want to plan your building to maximize particular elements - build big gardens to reduce your corruption, or save up to build two sphinxes at a time. Plan to build walls so that you can score big with the doors, or watch everyone else build the walls while you wait for the exact moment when you can steal their glory. Bluff everyone into thinking they're safe in gaining a little corruption, and then dump it all with a huge sacrifice to the high priest. Planning ahead is important, and organizing resources is critical. Timing is huge here - you don't want to grab that big stack of cards when it's going to get you a penalty, but you also don't want to wait until someone else grabs it and you're stuck with nothing you can build.

It's not like this is a perfect game, of course. Even though the luck balances out thanks to a trippy up-and-down card face thing, you can still wind up with a handful of nothing you can use. Your best-laid plans can be dashed in a moment by one guy pulling a really sweet combo. And while it is immensely entertaining to build this gorgeous model palace, this is the kind of game that you're not going to want to play twenty times, because it's basically the same thing every time.

But really, is there a perfect game? Puerto Rico, maybe, but I hate Puerto Rico, so give me the flawed games. Give me capricious luck and gorgeous components. Give me splashy card art and cutthroat opponents. And most of all, give me architects being eaten by crocodiles. Because it's not a man's game until somebody dies.

Cons:
Bit of a luck factor
Might get repetitive, if you don't write a game review site and wind up playing different games every week

For some reason I don't understand, Cleopatra and the Society of Ancients didn't do all that hot. So Dogstar Games doesn't have it. However, you can find it at the Eagle Games site, which is where once-beloved games go when they retire. It's like the Island of Misfit Games:
http://www.eaglegames.net/PhotoGallery.asp?ProductCode=DOW002
Posted by Matt Drake at 7:34 PM