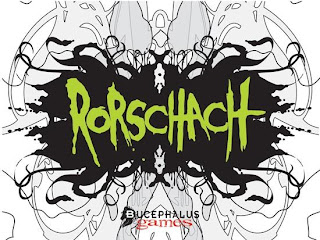 Here's an interesting tidbit about the game Rorschach - it's going to take me longer to write a review about the game that it would take to actually play it. Heck, by the time I'm describing what's on the cards, I probably could have pulled it out, played twice, and put it away. But then, I write slow.

Rorschach is a party game where you look at inkblots, then decide which looks the most like it has boobs. Well, OK, the questions vary, but if you're a grown man who thinks about sex more than he thinks about his own survival, you'll probably end up seeing a lot of girl parts, regardless of whether or not you're looking for them.

Here's how it works. Each player gets an eight-sided die. Then you put out cards with inkblots on them (one less than the number of players) and put numbers next to them. Then you flip a card that asks a question, like which one looks the most nimble, or the most unpleasant to step on, or the sexiest (for me, it's the one that looks like boobs). I would have vastly preferred an adult version, one that asks which blot looks most like your vanishing 401(k), or which one looks most like it would steal your identity and pass bad checks with your name on them, but I guess the designers wanted a family game. Which also means asking which blots look like they would be the best in bed are right out, even though that's the question I kept answering anyway.

The object of the game is to get a chip from each player, including yourself, which you do by matching the other players to get theirs, and matching nobody to get your own. The thing is, this wacky scoring mechanic (which coincidentally is the same as approximately two-thirds of party games) means you can technically win on your second turn. And when I say that can technically happen, what I mean is that it actually did happen when we played. Woohoo! Break out the next game, that one was too easy.

So we expanded the rules. We put out more vaginas - er, inkblots. And the game still went ridiculously fast, so we swapped out the boob pictures after every round, which prolonged the game by about 45 seconds. Then since we were playing with just four (it can go to eight), we decided to try getting two of each color. That was the most satisfying, because while it wasn't any harder to get the chips you needed, now it just took twice as long, which meant that it took nearly ten minutes.

But then, one of my main beefs with party games is that they take too long. When I've been sucking down Johnny Walker for two hours and following it with beer chasers, I don't tend to have the patience I would need to spend two hours providing clues so you can guess 'grease monkey' or drawing balloon animals. It's kind of cool to sit down around the table, toss back the rest of your brew, and play a game that's over before anyone can pass out.

I liked Rorschach, and so did everyone who played with me. It's not one of those games that makes you say, 'man, I wish I could play that again RIGHT NOW!!' but it's fun, diverting, and fast. If you're looking for a deep, engaging, lasting experience, buy a house or get a tattoo. If you want to break out a little light fun with simple rules and the opportunity to make nipple references, Rorschach will fill the bill.

But only for as long as it takes you to finish another beer and wonder whether your co-worker's wife wears a thong.

Pros:
Nice components and big, pretty cards
Easiest rules since Candyland
Plays faster than you can get a refill

Cons:
Shallower than your empty beer glass
Won't seem like much of a game with less than a crowd, and won't last long

You can get Rorschach here:
http://shop.bucephalus.biz/catalog/rorschach/20
Posted by Matt Drake at 9:20 PM