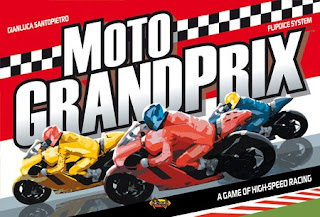 Here's a hint for all you budding game designers - don't pick a game, and then say, 'I'm going to make a game just like that game, only I'm going to make it suck.' That should probably be pretty obvious, but it seems some game designer out there was using that for his mantra when he made Moto Grand Prix.

OK, not really. Nobody really says that. But Moto Grand Prix does seem like it wants to be a Formula D clone, only with motorcycles. Only maybe the designers thought the gear box was too complicated, so they made up some silly thing with flipping dice, and then thought having bikes that could lean into turns and do wheelies would make up for having thoroughly unappealing game play.

There are admittedly a few things that make Moto Grand Prix seem pretty damned attractive. Like there are these cool little bikes with wheels that actually turn, and they lean and do wheelies and even stoppies, which is that crazy thing where you stop really fast and jam on your brakes so that you ride on your front wheel. You're probably not supposed to do that in a bike race, but since the little motorcycles in this game are on really flimsy little ball joints, they lean every which way, regardless of how you mean for them to stand.

And the track seems full of promise. You get a box chock full of cool road parts that you can hook together to make a ridiculous number of tracks. Only they're not easy to hook together because there are all these weird angles, and if you get one piece in the wrong place, the track looks like it's built on the San Andreas faultline. And another thing - there's this racing line that's supposed to tell you that you're in the fast lane, but the problem is, it only matters if someone is passing you in a turn, and otherwise there's no preferred lane, because you have the same number of spots in every lane.

So the roads and bikes might have some redeeming value, but where the game really fails to impress is in the dice mechanic. The entire thing is predicated on the fact that two sides of a die add up to seven, and so if you flip a 6, you get a 1, and a 3 flips to a 4, and so on. The rules relate the concept behind the flipping mechanic like they were telling you about how they discovered pasteurized milk, but bad news - I knew that when I was six. Admittedly, I was living in Nevada, and I think Nevada public schools teach junior high kids how to deal blackjack. But still, it's really not that huge a revelation.

The idea is that when you're on a straight piece of road, you can flip your dice to get the best roll, and when you're in a curve, you can't flip them as much as you might want. So you try to spend as little time as possible in a turn, right? No, not really, because if it's a difficulty 1 turn, it doesn't matter, you can still flip your lowest die, and even if it's a tougher turn, you'll probably end up rolling boxcars and just screaming out of the turn, laughing your ass off at the savvy racer who started braking right before the turn to make sure he didn't get stuck there and then rolled horribly.

And this is where it breaks down. The player who tries to calculate the turns, planning ahead and braking when he needs to, is going to spend a lot of time trying to figure out why he keeps losing to the guy who always takes the highest roll he can get. If you have a choice between a 5 that leaves you on the braking line for a steep turn and a 10 that takes you right into the middle of the turn, take the 10, every time. And that means that for all the super-genius dice flipping, you just roll and hope you roll high. It's slightly more awesome than Chutes and Ladders, and that's just because it has motorcycles.

I could go into the extra rules - spending engine points for an extra move point here and there, burning up your brakes, slipstreaming and whatever else, but these extra rules don't really make up for the fact that the most basic element of the game - the dice mechanic - is crap. And I don't mean like Vegas dice games, I mean like poop. You're entirely hostage to the whims of your dice, with virtually no way to force control over the outcome of the game, and so what looks like it had promise turns into a game you might enjoy with a handful of elementary school kids who just love to play with dice.

So maybe the designer was just trying to make Formula D with motorcycles and no lawsuit, and he almost achieved it, except that it sucks. Where Formula D tends to reward the player who knows when to play the odds and when to play it safe, Moto Grand Prix just has you roll dice until someone wins. That turns a lot of promise into a boring dice-off, and I would just as soon play something else.

Cons:
Bikes are floppy, and won't ever lean the way I want them to
Track is a bastard to build
Rules for actually moving your motorcycle are boring

To illustrate how much I disliked Moto Grand Prix, I was going to link to a picture of a motorcycle crash, but do you have any idea how deadly those are? It's depressing. So instead, here's a kitten: 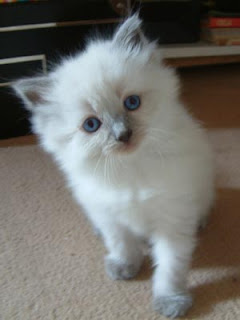 THANK YOU. They have this wild discount on this game at my store. It doesn't look very impressive but for just 40% of the original price I was going to check out the little bikes and the track building opportunities. I was however counting on at least a little gamepley which it seems this game is lacking. Thanks for the forewarning!
Keep on reviewing! Cheers.